How Academia & the Smithsonian are Responsible.

Contributed to (TLB) by Luca Majno

Re- Blogged from Suzannee Dupree – Looking Back Woman blog 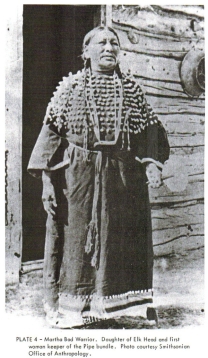 This woman is Arvol Looking Horse’s Grandmother, Lucy Looking Horse, not Lucy’s Mother, Martha Bad Warrior, as the Smithsonian states, Lucy….who began the White Buffalo Calf Pipe fraud-lie by the Looking Horse family, which has been promoted & controlled by the American Indian Movement since Wounded Knee 1973,

This copyrighted Riegert photo Demallie used for his own Native studies career with John Smith in 1967 in South Dakota Museum News, & then donated Riegert’s copyrighted photo to the Smithsonian with the wrong provenance provided by Looking Horses relatives enabled the Arvol Looking Horse hoax & fraud of the century to perpetuate over the last 40 plus years!
Continue Reading …. at LBW blog 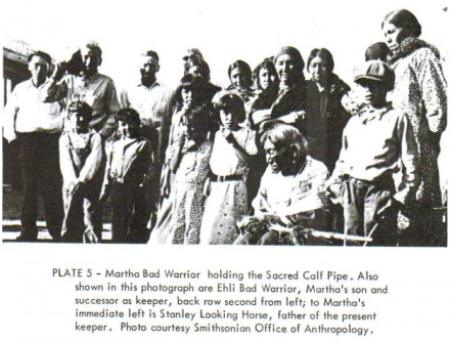 This photo here again was taken by Wilbur in Aug 1936, who in 1964 when he spoke with Lucy showed it to her & pointed out…she was there in Aug 1936 & in this photograph. Wilbur knew Andrew Dupris had been passed the catlinite Pte Hincala Cannunpa Kin, so he asked Lucy to see what she had, she asked for 100.00 for Wilbur to see the Cannunpa Wakan she was passing off as the real pipe, & Wilbur asked Lucy for the description of the Pte Hincala Cannunpa Kin, & she state no, they now had another Pipe the Looking Horses used for ceremony…she also denied even though she saw herself in this pic with her arms crossed, that it was her….
Continue Reading …. at LBW blog 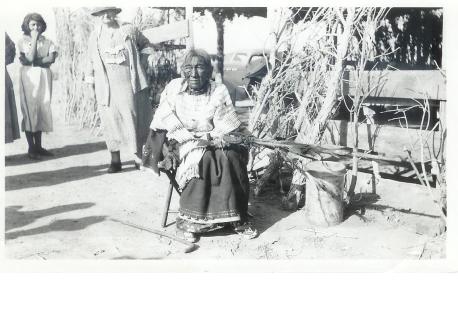 Mrs. Martha Bad Warrior was the last known keeper of the Sacred Calf Pipe in my grandfather’s time.

Gpa Wilbur wrote of Martha, “During our interview with Martha, the thought struck me profoundly: Here I am talking to the only woman keeper of the Sacred Calf Pipe since it entered the religious tradition of the Sioux. At the beginning it was a woman, a beautiful lady from the sun who brought the Sacred Pipe and presented it to the Sioux people. So, to me, Mrs. Bad Warrior was the Beautiful Lady in the Spirit.”

Extracted from: Quest for the Pipe of the Sioux

Marie Elk Head Fiddler is a Grand daughter of William Elk Head, This is the true original family of the Sacred White Buffalo Calf Pipe care takers, Marie and family are working at correcting the current misrepresentation of Arvol Looking Horse, He isn’t a blood family member of the Elk Head family as testified by Marie. He doesn’t possess the White Buffalo Pipe,

The Looking Horse family never had it, what has occurred is nothing more than a fraud, According to reliable sources there are seven (7) modern day peace pipe in the bundle they have at his place in Green Grass,South Dakota, Marie has recently been diagnosed with a terminal illness and desires to correct history concerning the true caretakers of the Sacred Cannupa, which are her family, the true descendants of Elk Head,

We, as the rightful heirs and direct, lineal descendants of the 9th Generation Keeper of our Sacred Canunpa; Elk Head, are requesting that Mr. Arvol Looking Horse cease and desist from misrepresenting himself as the so called 19th Generation Keeper of the Sacred Canunpa; the White Buffalo Calf Pipe, as he puts it. Mr. Arvol Looking Horse is not a direct lineal descendant, nor is he related by blood or have any type of familial ties, and nor was he or his relatives before him was ever designated to be the Keeper, by Elk Head; who was the true Keeper and had passed into the spirit world in 1914. Our grandfather, Elk Head had left a legal will in his probate records designating his eldest son, Elias Elk Head to be the Keeper of the sacred Canunpa and designated his eldest grandson from Elias, William Elk Head to be after Elias. Mrs. Martha Bad Warrior was not his daughter, nor was she designated to be a Keeper of the sacred Canunpa. It was traditional law that the Canunpa was to be kept from father to son, in the ltazipcola band. Each male keeper opened the Canunpa in need of war, starvation and sickness that involves all the Sioux Nation of the Lakota, Dakota and Nakota people to see it and pray with it. Why hasn’t Arvol ever opened it to our people to actually see the contents of the sacred Canunpa? When the Elk Head family members have all seen it? There has been negative propaganda against our family, who are the true, direct, lineal descendants of Elk Head, by Mr. Arvol Looking Horse and his partner, Paula Horne-Mullen, as well as his family members; which has caused media censorship against our family so we can not address Mr. Arvol Looking Horses’ lies and distortions of the truth. It has also caused violent threats, violent actions/retaliations against our family members and having our personal property destroyed by his family members and followers/supporters. Examples of media censorship includes: The Native Voice newspaper, owned by Mr. Frank King and Lisa King, The Dakota Journal, owned by the Flandreau Sioux Tribe and the Lakota Country Times who are supporters of Mr. Arvol Looking Horse and who have written many supporting articles about him as the 19th Generation Keeper of the sacred Canunpa without consulting us, the Elk Head family and allowing us equal media time. We are demanding that these news medias, cease and desist in assisting Arvol Looking Horse from perpetuating the misrepresentation and fraudulent activities as a so called Keeper and spreading any more negative propaganda about our family by writing any more articles concerning our sacred Canunpa and give us equal media time to bring out the facts and truth as we are the true, direct, lineal descendants of our 9th Keeper, Elk Head.

We are asking all individuals addressed in this letter to stop using and catering to Mr. Arvol Looking Horse and addressing him as the 19th Generation Keeper of our sacred Canunpa which is assisting him in perpetuating his misrepresentation and all of his fraudulent activities. We, as the Elk Head family have designated Shirley Fiddler-granddaughter to the 9th Generation Keeper, Elk Head, to be our spokesperson and contact person in these matters. All questions and concerns should be directed to Shirley Fiddler @ 605-964-7313 who resides in Green Grass, South Dakota.

Respectfully submitted by the true, direct, lineal descendants of our grandfather Elk Head, 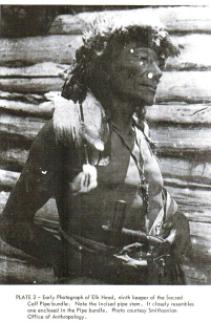 The Smithsonian photograph above is why Martha Bad Warrior did not pass the Pte Hincala Cannunpa Kin to anyone in her family…they were becoming Christianized …. note the cross around Elk Heads neck!

The Selling of Indian Culture by Arvol Looking Horse & AIM…

We are in the process of getting copies of these documents out to the world. People have to wake up and realize that they are being fooled by Arvol and Paula, One of the greatest Hoaxes of all time by this couple and their families. Of course they stand to lose alot money wise. These lineal descendants of Elk Head have their papers and their probate records to prove the truth, this would hold up in any court.

It’s Time to Stop and Rewind the Clock

Fools Crow refused Crow Dog, because he did not want the AIM urban militant domestic terrorist faction to control our Spiritual Legacy….he saw the sickness….and he saw the future of what would happen…he did his best to prevent it by conducting those WBCPC & Sun Dances 1970-1975…and passing the “Staff of Power” back to the women, but the men refused to recognize the transfer…..and now AIM are our so-called Spiritual Elders….though AIM is not, for they have the blood of the innocent on their hands, which is against Tetuwan Lakota protocols & teachings!.

The Aftermath of AIM, 40 Years Later

The teenage suicide rate on the Pine Ridge Reservation is 150 percent higher than the national average. Children as young as 6 have reportedly attempted to take their own lives. In 2009, the president of the Oglala Sioux Tribe declared a suicide state of emergency. The emergency still exists

Ann ThunderHawk – The Truth Comes Out

Does anyone recall who was to tour Turtle Island about 10 yrs back and deem what spots were or were not Sacred ? The  man that deemed himself to determine such,  evades me at this moment .

What has the AIM backed  male dominated Spiritual Leaders of today, who have cast woman’s voice to the side,  done about people like  Steve McCullough, who leads a Sun Dance in Indiana and sells ceremony in Europe.

Additional reading… The Story of The Elk Head Family.

(TLB) published this article as posted by Luca Majno with permission.

Hyperinflation Can Happen Much Faster Than You Think