Here we go. Special counsel Mueller and his team have filed the first federal charges against Trump-campaign officials Paul Manafort and Rick Gates.

CNN is running the headline: MANAFORT, GATES CHARGED WITH CONSPIRACY AGAINST THE US.

Other press outlets are following suit, emphasizing the “conspiracy against the US.”

CNN writes: “The indictment against the Manafort and Gates contains 12 counts: conspiracy against the United States, conspiracy to launder money, unregistered agent of a foreign principal, false and misleading US Foreign Agents Registration Act (FARA) statements, false statements, and seven counts of failure to file reports of foreign bank and financial accounts.”

—But here is the real takeaway, and of course MSM outlets are ignoring it: the conspiracy charge is a piece of federal boilerplate. Alongside the basket of other charges mentioned above, conspiracy is a general category that is tacked on. It isn’t a specific singular charge. It definitely isn’t “these two men conspired with Russia to hand Trump the election.”

In fact, CNN adds: “The charges do not cover any activities related to the campaign, though it’s possible Mueller could add additional charges.”

But when MSM outlets blare “conspiracy against the United States,” most readers and viewers will assume this does mean a charge of working with Russia to make Trump president.

Of course, the Mueller indictments are also being used to blot out the Clinton Uranium One scandal and the Trump dirty dossier scandal, both of which involve the Clintons, and Mueller as well, since he was the head of the FBI when the Bureau discovered all sorts of corruption and bribery involving Russia’s nuclear industry, during Uranium One negotiations, and either failed to disclose the findings, or failed to use them to make an impact on Obama.

Today, it’s all about “conspiracy against the United States,” and the mainstream news audience who thinks and comprehends and talks in terms of vague generalities—like thirsty travelers in the desert spotting the mirage of an oasis.

“OH, CONSPIRACY AGAINST AMERICA, WELL THAT’S IT THEN, THEY NAILED THEM.”

In case you haven’t read my piece on the Clintons and the Uranium One scandal—which most definitely DOES connect Bill and Hillary to corrupt dealings with the Russians, and which hasn’t been “debunked,” as MSM outlets keep insisting, here it is:

—Cue the dawn sunrise and violins for the beautiful first couple of American politics (the Clintons).

But what about the uranium scandal?

Before I quote a NY Times piece on this—suppose, just suppose the beautiful first couple, Bill and Hillary, have been running a parallel operation to the government, in the form of a Foundation that is taking in major chunks of cash from people who want (and get) serious political favors.

Well, current news stories confirm that. We already know that.

Putin wants 20% of uranium on US soil. That 20% is already owned by a Canadian mining company.

The Canadian executives want to sell it to Putin.

But because uranium is a US “national security” product, various US federal agencies have to OK the deal. One of those agencies is the US State Department.

The State Department is headed up by Hillary Clinton. Her Department says yes to the uranium deal.

The kicker? Those Canadian mining executives, who wanted the sale to Putin to go through, donated millions to the Clinton Foundation.

On April 23, 2015, the NY Times ran a story under the headline: Cash Flowed to Clinton Foundation Amid Russian Uranium Deal.

The bare bones of the story: a Canadian company called Uranium One controlled a great deal of uranium production in the US. It was sold to Russia (meaning Putin and his minions). So Putin now controls 20% of US uranium production.

From the Times: “…the sale gave the Russians control of one-fifth of all uranium production capacity in the United States.”

The Times: “The [Pravda] article, in January 2013, detailed how the Russian atomic energy agency, Rosatom, had taken over a Canadian company [Uranium One] with uranium-mining stakes stretching from Central Asia to the American West. The deal made Rosatom one of the world’s largest uranium producers and brought Mr. Putin closer to his goal of controlling much of the global uranium supply chain.”

“But the untold story behind that story is one that involves not just the Russian president, but also a former American president and a woman who would like to be the next one.”

“At the heart of the tale are several men, leaders of the Canadian mining industry, who have been major donors to the charitable endeavors of former President Bill Clinton and his family. Members of that group built, financed and eventually sold off to the Russians a company that would become known as Uranium One.”

“Since uranium is considered a strategic asset, with implications for national security, the deal [to sell Uranium One to Putin] had to be approved by a committee composed of representatives from a number of United States government agencies. Among the agencies that eventually signed off was the State Department, then headed by Mr. Clinton’s wife, Hillary Rodham Clinton.”

“As the Russians gradually assumed control of Uranium One in three separate transactions from 2009 to 2013, Canadian records show, a flow of cash made its way to the Clinton Foundation. Uranium One’s chairman used his family foundation to make four donations totaling $2.35 million. Those contributions were not publicly disclosed by the Clintons, despite an agreement Mrs. Clinton had struck with the Obama White House to publicly identify all donors. Other people with ties to the company made donations as well.”

“And shortly after the Russians announced their intention to acquire a majority stake in Uranium One, Mr. Clinton received $500,000 for a Moscow speech from a Russian investment bank with links to the Kremlin that was promoting Uranium One stock.”

If you’re Putin and you’re sitting in Moscow, and the uranium deal has just dropped this bonanza into your lap, what’s your reaction—after you stop laughing and popping champagne corks? Or maybe you never really stop laughing. Maybe this is a joke that keeps on giving. You wake up in the middle of the night with a big grin plastered on your face, and you can’t figure out why…and then you remember, oh yeah, the uranium deal. The US uranium. Who’s running the show in America? Ha-ha-ha. Some egregious dolt? Maybe he’s a sleeper agent we forgot about and he reactivated himself. And this Clinton Foundation—how can the beautiful couple get away with that? Can we give Hillary a medal? Can we put up a statue of her in a park? Does Bill need any more hookers?

Final note: there is a great deal of difference between a major outlet like the NY Times running their Clinton/uranium piece for one day—and pounding on it for weeks and months. In the latter case, they would let loose the hounds, who would probe and push and interview relevant people and get confessions and parlay those confessions up the food chain—blowing the story into an enormous scandal—which it is.

The Times had its hands on a volcanic piece…and they let it drop. Because the ceiling and the limit had been reached. The Times basically executed what’s called a limited hangout, a partial exposure of a story that was getting too hot to suppress entirely.

The limited hangout allows the venting of steam—and then nothing more. In this case, the Clinton camp denies there was any quid pro quo, they assert Hillary had nothing to do with the uranium deal, and the curtain falls.

Thus you have the reality which the major media did expose, vs. the reality they could have exposed. The “could have” part would have changed current history—but it was squelched, and put under wraps.

Tossed on the junk heap.

Now, the Senate Judiciary Committee and Chairman Chuck Grassley are looking into these crimes, because new reports of corruption are surfacing:

FOX News: “The Hill reported that the FBI had evidence as early as 2009 that Russian operatives used bribes, kickbacks and other dirty tactics to expand Moscow’s atomic energy footprint in the U.S. — but the Obama administration approved the uranium deal benefiting Moscow anyway.”

“Grassley on Wednesday [raised]…the question of whether the [US government] committee that approved the [uranium] transaction [in 2010] was aware of the FBI probe. The Committee on Foreign Investment in the United States (CFIUS) [which approved the uranium deal] included then-Secretary of State Hillary Clinton.”

As Newsweek reports, that early FBI probe was launched under FBI Director Robert Mueller. Mueller is now trying to dig up (or invent) every tidbit he can about Russian collusion with…Trump in the 2016 presidential election. My, my.

Newsweek contacted the FBI a few days ago, asking whether Mueller had informed the Obama White House about his old FBI probe that uncovered Russian corruption relevant to the uranium deal that was being put together at the time.

Newsweek: “The FBI said it had no comment to Newsweek questions about whether Mueller alerted senior Obama administration officials, including Clinton, about the [FBI] investigation before they brokered the [uranium] deal.”

BOOM. Are you kidding? No comment? That’s tantamount to admitting, “Look, either way we answer that question, we’re screwed or the Obama White House is screwed, so we’re remaining mum. We’re protecting VERY IMPORTANT PEOPLE and the truth doesn’t matter.”

However, the FBI refusal is buried deep in mainstream stories.

But wait, it gets even better:

FOX: “[Grassley] is calling for the Justice Department to lift an apparent ‘gag order’ on an FBI informant who reportedly helped the U.S. uncover a [2009-10] corruption and bribery scheme by Russian nuclear officials but allegedly was ‘threatened’ by the Obama administration to stay quiet.”

“Victoria Toensing, a lawyer for the former FBI informant, told Fox News’ ‘America’s Newsroom’ that her client has ‘specific information about [Russian] contributions and bribes to various entities and people in the United States’.”

“She said she could not go further because her client has not been released from a nondisclosure agreement but suggested the gag order could be lifted soon. [It was lifted a few days ago.] Toensing also claimed that her client was ‘threatened by the Loretta Lynch Justice Department’ when he pursued a civil action in which he reportedly sought to disclose some information about the case.”

The gag order and the non-disclosure agreement are nonsense. They don’t apply when enforcing them would cover up a major crime.

I have suggestions for the FBI informant’s lawyer Toensing, if she’s playing it straight.

Hire at least four top-flight private security firms to guard your client around the clock, and hope these firms don’t have strong ties to government law-enforcement.

Issue a firm declaration from your client stating he is in good health and has no intention of committing suicide.

Do these things yesterday.

After all, it’s the Clintons we’re talking about, and Obama and the FBI.

And, of course, the Clintons.

TLB recommends a visit to Jon Rappoport’s blog for other thought provoking news and perspective.

Who is Trying to Silence Filmmaker and Judicial Watchdog Bill Windsor, Currently Held in County Jail? 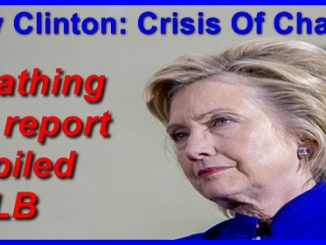 War Against the People: Fear & Loathing In NY & DC