NGOs (Non Governmental Organizations) have become quite the choice tool of subversion, destabilization and domination for the US-led New World Order. As the recent Soros hack has shown, the US (in particular) has embarked on a cunning strategy of infiltration in its foreign policy. On the surface, NGOs appear as benign, helpful and, at the very worst, harmless creatures which do work that promotes the betterment of humanity. Many of them do perform philanthropic work, however others are created and controlled right from the start to be nothing more than instruments of infiltration and influence – influence which is highly unwanted in the target nation. These latter kind of NGOs are a manifestation of US-NWO soft power by which the US can manipulate and dominate a country without having to fire a single bullet. This subterfuge was working very well for awhile, but now in the aftermath of the 2014 Ukraine coup and other events, nations are beginning to wake up to the trickery and are passing laws restricting or forbidding NGOs on their turf.

NGOs are the choice tool of subversion for the New World Order. Spouting propaganda, they are the soft power option that can overthrow foreign governments.

Russia, China, Israel and Other Countries Now Restricting or Banning Foreign NGOs Inside their Land

The fact that numerous nations such as Israel, China, India, Russia and others have passed laws against foreign NGOs gives you some idea of how powerful NGOs have become. In July 2016, Israel passed a law requiring foreign NGOs to declare the source of their funding. The introduction of the law read: “The law wishes to deal with the phenomenon of NGOs which represent foreign interests of foreign states, while acting under the cover of local organizations seeking to serve the interests of the Israeli public” and Israeli Prime Minister Benjamin Netanyahu said the law’s goal was “to prevent an absurd situation in which foreign states meddle in Israel’s internal affairs by funding NGOs, without the Israeli public being aware of it.” In April 2016, China passed a law requiring foreign NGOs to register with, and be approved by, their Government. In March 2015, India banned 69 NGOs from receiving foreign contributions. Earlier in December 2012, Russia passed a law that was specifically targeted against US NGOs operating inside Russia. Some of the provisions from the law are:

Citizens with dual US-Russian dual citizenship are prohibited from membership or participation in the management of Russian NGOs or registered offices of foreign NGOs that participate in political activities in Russia.

In case of the seizure of assets of an NGO, the NGO also loses its rights to found mass media outlets and is prohibited from conducting mass and public events and from using bank accounts, with a few exceptions outlined in Federal Law on NCOs.

So why are so many countries all of a sudden getting so scared of NGOs? The answer lies in the power of NGOs to influence public thought and stealthily disseminate propaganda that can cause people to lose faith in their politicians, overthrow governments and induce a nation to make poor decisions that benefit the funder of the NGOs, usually the US. 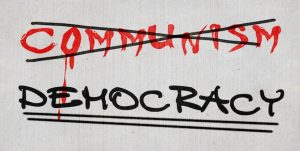 NGO subversion: turning communism into democracy doesn’t help you if you’re under the thumb of the NWO.

NGOs: When Soft Power Becomes the Tough Power to Destabilize and Overthrow

Take a look at George Soros’ colossal network of NGOs, which include the NED (National Endowment for Democracy) and NDI (National Democratic Institute). As Eric Draitser notes in his article China’s NGO Law: Countering Western Soft Power and Subversion:

“Human Rights Watch, and the NGO complex at large, has condemned China’s Overseas NGO Management Law because they quite rightly believe that it will severely hamper their efforts to act independently of Beijing. However … the reality is that they act as a de facto arm of western intelligence agencies and governments, and they have played a central role in the destabilization of China in recent years.”

“The oft touted leader of Occupy Central was a pro-Western academic named Benny Tai, a law professor at the University of Hong Kong. Though he presented himself as the leader of a grassroots mass movement, Mr. Tai has for years been partnered with the NDI, a nominal NGO which is actually directly funded by the US State Department via the NED … Tai [and other Chinese] each act as the public face of a US Government-sponsored initiative to destabilize the political situation in Hong Kong, one of China’s most economically and politically important regions. Through the intermediary of the NGO, Washington is able to promote an anti-Beijing line under the auspices of “democracy promotion,” just as it has done everywhere from Ukraine to Venezuela.”

The NGOs of arch manipulator George Soros played a big part in the 2014 Ukrainian coup. Above: the Maidan in Ukraine, before and after.

The horrible Ukrainian coup of 2014 could not have been pulled off without the help of Soros and his NGOs. Vicky Nuland told us that the US pumped $5 billion into regime change there. William Jasper notes:

“Many of the participants in Kiev’s “EuroMaidan” demonstrations were members of Soros-funded NGOs and/or were trained by the same NGOs in the many workshops and conferences sponsored by Soros’ International Renaissance Foundation (IRF), and his various Open Society institutes and foundations. The IRF, founded and funded by Soros, boasts that it has given “more than any other donor organization” to “democratic transformation” of Ukraine.”

Earlier in May 2016, Vanessa Beeley reported that the so-called White Helmets NGO was actually a “US and UK government-funded “first responder” organization in Syria … shown to have deep ties to al-Nusra Front as well as links to ISIS, and it operates exclusively within terrorist-held areas in Syria, including participation in executions.” Did you catch that? Participations in executions? Links to the US-UK-Israeli controlled pet Frankenstein ISIS? I suppose this NGO matches the “humanitarian” bombings carried out by NATO against innocent civilians in Libya and other Middle Eastern countries …

NGOs are running amok. We don’t just have NGOs; we have an actual NGO complex which is controlled by the New World Order and is part of their psychological operations and perception management department. It ensures that American democracy and humanitarian interventions (both doublespeak oxymorons) are coated with sugar to go down well. Often, they hide behind the excuse of furthering human rights as a way to justify their subversive operations. Patrick Henningsen wrote an excellent article in April 2016 entitled AN INTRODUCTION: Smart Power & The Human Rights Industrial Complex which spells out the way these NGOs operate:

“Shaping western public perception and opinion on major international issues is essential if major world powers are to realise their foreign policy goals. Not surprisingly, we can see that many of the public positions taken by NGOs are exactly aligned with western foreign policy. In the Balkans War of the 1990s, human rights groups supported partitioning. In the Ukraine in 2014 and with both Syria and Yemen in 2016 they supported regime change. In each instance NGOs function as a public relations extension to a United Nations western member Security Council bloc, namely the US, UK and France. This collusion is manifest throughout the upper echelons of these organizations whose streamlined agenda conforms through a lucrative revolving door which exists between a cartel of western NGOs, government and media.”

The role of NGOs and human rights organizations has been pivotal in Syria, to provide cover for the US to carry out its clear intention of regime change:

“By framing the Syrian Conflict (2011 to present) as a “civil war”, both western media and human rights organizations did their part in propping-up an important western foreign policy narrative. Inaccurate and distorted, this narrative has helped shield the US-led clandestine proxy war … [but the reality is] a US-backed guerrilla war where Washington and Ankara, along with NATO and Gulf Cooperation Council (GCC) allies, flooding Turkey and Syria with weapons, cash, equipment, social media teams, military trainers and foreign fighters from as a far away as Pakistan.”

NGOs are responsible for all those feel-good petitions that totally misinform Westerners about some poor country that is about to get invaded, whip up misdirected outrage and persuade people to get in line with the exact military goals the US has already planned? Have you noticed how may NGOs call for “No Fly Zones“, “Buffer Zones” or “Safe Zones“? Remember the phony Stop Kony 2012 campaign? Remember how George Soros’ Avaaz called for a No Fly Zone in Libya, to help US-NATO assassinate Gaddafi and control Libya? A lot of people are getting played like a fiddle …

Conclusion: Nations Protecting Themselves Against Foreign NGOs is Justified

Pumping money into foreign countries for regime change, or manipulating foreign elections for leadership change, is an old game that the CIA and branches of the US Government have been playing for decades. The game is nothing new; it’s only the style that has changed. NGOs are the velvet glove on the iron fist, carrying out the dirty subversive work of the NWO but making it look like roses. Fortunately, many nations targeted by this rank infiltration have noticed the threat and taken appropriate measures to defend their culture, laws, stability and way of life. How much longer until people in the US and the West wake up to the NGO subversion too?

ER recommends other article by The Freedom Articles

Makia Freeman is the editor of alternative news / independent media site The Freedom Articles and senior researcher at ToolsForFreedom.com (FaceBook here), writing on many aspects of truth and freedom, from exposing aspects of the worldwide conspiracy to suggesting solutions for how humanity can create a new system of peace and abundance.