Omar Begs Twitter To Censor Trump, Does Not Get Her Way

Minnesota Rep. Ilhan Omar whined to Twitter CEO Jack Dorsey about a tweet from President Donald Trump that she said incited people to attack her.

The tweet in question was a video President Trump shared of her speaking and the words were her own and not doctored.

The Congresswoman likely thought that she would get a sympathetic ear from Dorsey but she did not get what she expected, The Washington Post reported.

The previously unreported call focused on an incendiary video that Trump shared on April 12, which depicts Omar discussing the Sept. 11, 2001, attacks interspersed with footage of the Twin Towers burning. The clip did not include the full context of Omar’s remarks, which were taken from a public event on the broader issue of Islamophobia.

Omar pressed Dorsey to explain why Twitter didn’t remove Trump’s tweet outright, according to a person familiar with the conversation who spoke on condition of anonymity because the call was private. Dorsey said that the president’s tweet didn’t violate the company’s rules, a second person from Twitter confirmed.

Dorsey also pointed to the fact that the tweet and video already had been viewed and shared far beyond the site, one of the sources said. But the Twitter executive did tell Omar that the tech giant needed to do a better job generally in removing hate and harassment from the site, according to the two people familiar with the call.

“During their conversation, [Dorsey] emphasized that death threats, incitement to violence, and hateful conduct are not allowed on Twitter,” a spokesperson for Twitter said.

“We’ve significantly invested in technology to proactively surface this type of content and will continue to focus on reducing the burden on the individual being targeted. Our team has also consistently been in touch with Rep. Omar’s office,” the spokesperson said.

Omar said in April that the tweet from President Trump had resulted in an increase in threats on her life. 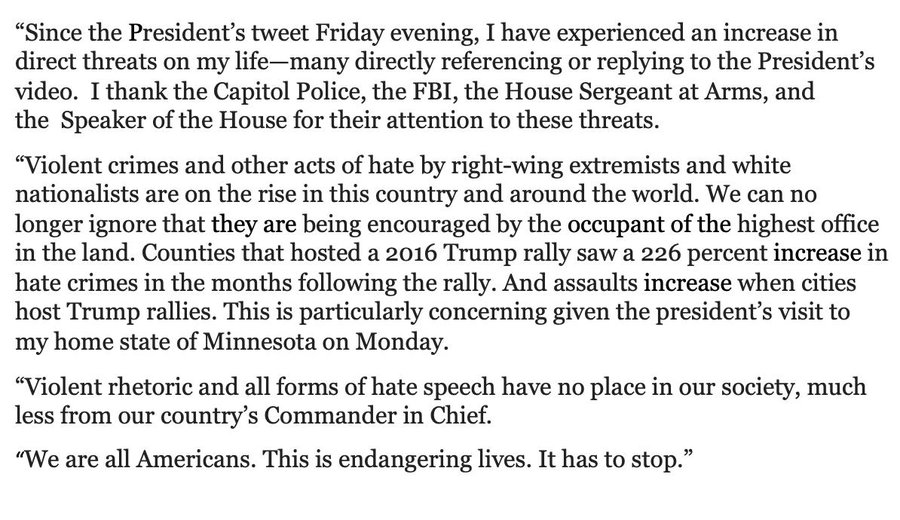 We are all Americans. This is endangering lives. It has to stop.

“I have experienced an increase in direct threats on my life—many directly referencing or replying to the President’s video,” she said

“I thank the Capitol Police, the FBI, the House Sergeant at Arms, and the Speaker of the House for their attention to these threats,” she said.

“Violent crimes and other acts of hate by right-wing extremists and white nationalists are on the ride in this country and around the world,” the Congresswoman said.

We can no longer ignore that they are being encouraged by the occupant of the highest office in the land,” she said.

“Violent rhetoric and all forms of hate speech have no place in our society, much less from our country’s Commander in Chief,” she said. “We are all Americans. This is endangering lives. It has to stop.”

Members of Congress are using their power to censor political adversaries. https://nypost.com/2019/04/25/ilhan-omar-complained-to-jack-dorsey-about-trump-tweet/ …

(TLB) published this article from The Federalist Papers with our appreciation for the coverage.