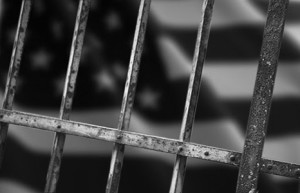 “It is perfectly possible for a man to be out of prison and yet not free—to be under no physical constraint and yet be a psychological captive, compelled to think, feel and act as the representatives of the national state, or of some private interest within the nation wants him to think, feel and act. . . . To him the walls of his prison are invisible and he believes himself to be free.”—Aldous Huxley, A Brave New World Revisited

“Free worlders” is prison slang for those who are not incarcerated behind prison walls.  Supposedly, those fortunate souls live in the “free world.” However, appearances can be deceiving.

“As I got closer to retiring from the Federal Bureau of Prisons,” writes former prison employee Marlon Brock, “it began to dawn on me that the security practices we used in the prison system were being implemented outside those walls.” In fact, if Brock is right, then we “free worlders” do live in a prison—albeit, one without visible walls.

In federal prisons, cameras are everywhere in order to maintain “security” and keep track of the prisoners. Likewise, the “free world” is populated with video surveillance and tracking devices. From surveillance cameras in stores and street corners to license plate readers (with the ability to log some 1,800 license plates per hour) on police cars, our movements are being tracked virtually everywhere. With this increasing use of iris scanners and facial recognition software—which drones are equipped with—there would seem to be nowhere to hide.

Detection and confiscation of weapons (or whatever the warden deems “dangerous”) in prison is routine. The inmates must be disarmed. Pat downs, checkpoints, and random searches are second nature in ferreting out contraband.

Metal detectors are now in virtually all government buildings. There are the TSA scanning devices and metal detectors we all have to go through in airports. Police road blocks and checkpoints are used to perform warrantless searches for contraband. Those searched at road blocks can be searched for contraband regardless of their objections—just like in prison. And there are federal road blocks on American roads in the southwestern United States. Many of them are permanent and located up to 100 miles from the border.

Prison officials open, search and read every piece of mail sent to inmates. This is true of those who reside outside prison walls, as well. In fact, “the United States Postal Service uses a ‘Mail Isolation Control and Tracking Program’ to create a permanent record of who is corresponding with each other via snail mail.” Believe it or not, each piece of physical mail received by the Postal Service is photographed and stored in a database. Approximately 160 billion pieces of mail sent out by average Americans are recorded each year and the police and other government agents have access to this information.

Prison officials also monitor outgoing phone calls made by inmates. This is similar to what the NSA, the telecommunication corporation, and various government agencies do continually to American citizens. The NSA also downloads our text messages, emails, Facebook posts, and so on while watching everything we do.

Then there are the crowd control tactics: helmets, face shields, batons, knee guards, tear gas, wedge formations, half steps, full steps, pinning tactics, armored vehicles, and assault weapons. Most of these phrases are associated with prison crowd control because they were perfected by prisons.

Finally, when a prison has its daily operations disturbed, often times it results in a lockdown. What we saw with the “free world” lockdowns following the 2013 Boston Marathon bombing and the melees in Ferguson, Missouri and Baltimore, Maryland, mirror a federal prison lockdown.

These are just some of the similarities between the worlds inhabited by locked-up inmates and those of us who roam about in the so-called “free world.”

Is there any real difference?

To those of us who see the prison that’s being erected around us, it’s a bit easier to realize what’s coming up ahead, and it’s not pretty. However, and this must be emphasized, what most Americans perceive as life in the United States of America is a far cry from reality. Real agendas and real power are always hidden.

As Author Frantz Fanon notes, “Sometimes people hold a core belief that is very strong. When they are presented with evidence that works against that belief, the new evidence cannot be accepted. It would create a feeling that is extremely uncomfortable, called cognitive dissonance. And because it is so important to protect the core belief, they will rationalize, ignore and even deny anything that doesn’t fit in with the core belief.”

This state of denial and rejection of reality is the essential plot of John Carpenter’s 1988 film They Live, where a group of down-and-out homeless men discover that people have been, in effect, so hypnotized by media distractions that they do not see their prison environment and the real nature of those who control them—that is, an oligarchic elite.

Caught up in subliminal messages such as “obey” and “conform,” among others, beamed out of television and various electronic devices, billboards, and the like, people are unaware of the elite controlling their lives. As such, they exist, as media analyst Marshall McLuhan once wrote, in “prisons without walls.” And of course, any resistance is met with police aggression.

A key moment in the film occurs when John Nada, a homeless drifter, notices something strange about people hanging about a church near the homeless settlement where he lives. Nada decides to investigate. Entering the church, he sees graffiti on a door: They live, We sleep. Nada overhears two men, obviously resisters, talking about “robbing banks” and “manufacturing Hoffman lenses until we’re blue in the face.” Moments later, one of the resisters catches Nada fumbling in the church and tells him “it’s the revolution.” When Nada nervously backs off, the resister assures him, “You’ll be back.”

Rummaging through a box, Nada discovers a handful of cheap-looking sunglasses, referred to earlier as Hoffman lenses. Grabbing a pair and exiting the church, he starts walking down a busy urban street.

Sliding the sunglasses on his face, Nada is shocked to see a society bombarded and controlled on every side by subliminal messages beamed at them from every direction. Billboards are transformed into authoritative messages: a bikini-clad woman in one ad is replaced with the words “MARRY AND REPRODUCE.” Magazine racks scream “CONSUME” and “OBEY.” A wad of dollar bills in a vendor’s hand proclaims, “THIS IS YOUR GOD.”

What’s even more disturbing than the hidden messages, however, are the ghoulish-looking creatures—the elite—who appear human until viewed them through the lens of truth.

This is the subtle message of They Live, an apt analogy of our own distorted vision of life in the American police state. These things are in plain sight, but from the time we are born until the time we die, we are indoctrinated into believing that those who rule us do it for our good. The truth, far different, is that those who rule us don’t really see us as human beings with dignity and worth. They see us as if “we’re livestock.”

It’s only once Nada’s eyes have been opened that he is able to see the truth: “Maybe they’ve always been with us,” he says. “Maybe they love it—seeing us hate each other, watching us kill each other, feeding on our own cold f**in’ hearts.” Nada, disillusioned and fed up with the lies and distortions, is finally ready to fight back. “I got news for them. Gonna be hell to pay. Cause I ain’t daddy’s little boy no more.”

As I point out in my book Battlefield America: The War on the American People, the warning signs have been cautioning us for decades. Oblivious to what lies ahead, most have ignored the obvious. We’ve been manipulated into believing that if we continue to consume, obey, and have faith, things will work out. But that’s never been true of emerging regimes. And by the time we feel the hammer coming down upon us, it will be too late.

All the Dachaus must remain standing. The Dachaus, the Belsens, the Buchenwalds, the Auschwitzes—all of them. They must remain standing because they are a monument to a moment in time when some men decided to turn the earth into a graveyard, into it they shoveled all of their reason, their logic, their knowledge, but worst of all their conscience. And the moment we forget this, the moment we cease to be haunted by its remembrance. Then we become the grave diggers.

Take the warning signs seriously. And take action because the paths to destruction are well disguised by those in control.

This is the lesson of history

TREASON – A NOTICE TO PUBLIC SERVANTS…