REVERSE BREXIT? Macron Signals to May That UK Can Remain in the EU

If you are paying attention, you will see more and more stories positioned by the mainstream media steering the public away from a ‘Hard BREXIT’ and reminding people that, ‘the public mood has changed since the referendum,’ and that ‘maybe it’s easier for Britain to just stay in the EU.’

What The Guardian is carefully avoiding here is the realpolitik thriving beneath this carefully spun headline. In fact, all British media are avoiding the true nature of the BREXIT deception, which is that the Conservative Party never intended to take the UK out of the EU.

“Embracing the world is a policy agenda that Theresa May has been discussing since she became Prime Minister. Her intention is the fatal embrace of the black widow spider. The “brighter future” of Britain can be summed up in one hashtag: #GlobalBritain.

“Brexit, you see, “means more than negotiating our new relationship with the EU. It means taking the opportunity of this great moment of national change to step back and ask ourselves what kind of country we want to be.”

For anyone who bothered to read it at the time, the Conservative agenda for Britain to renegotiate its position with the EU was outlined in in February 2016 in David Cameron’s Best of Both Worlds document.

Viewed in this way, it’s very likely that Theresa May and the Tory ‘Leave’ has only been play-acting in order to co-opt the UK Independence (UKIP) movement and party platform, and ultimately destroy the UKIP Party – which they have done rather easily.

The rest is just a question of repeated delaying, and nudging by Westminster, until the public lose interest and the media can be reading from the same hymn sheet, altogether singing that old Tory spiritual tune, “The Best of Both Worlds”… 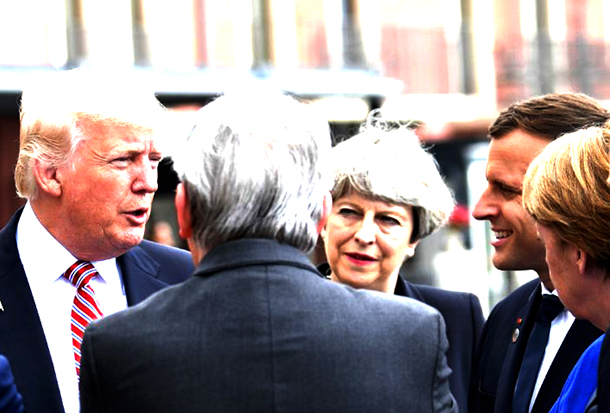 Macron, May, Merkel and Trump discussing how best to hoodwink the public in 2017.

The French president, Emmanuel Macron, has claimed the door to the EU will remain open to Britain during Brexit negotiations that get underway next week.

In remarks that will be taken as an encouraging sign by opponents of a hard Brexit that there may be room for compromise, the newly elected French leader said the decision to leave the EU could still be reversed if the UK wished to do so.

Speaking in the gardens of the Élysée Palace in Paris in a joint press conference with Theresa May, Macron made it clear that he respected the sovereign decision of the British people. However, he added: “Until negotiations come to an end there is always a chance to reopen the door.”

And Macron suggested that time was of the essence, saying: “As the negotiations go on it will be more and more difficult to go backwards.”

The prime minister’s first foreign visit following the general election last Thursday in which she hoped to win a landslide should have been a triumphant occasion. Instead, her visit to the French capital – the first occasion on which she has faced the media since the disappointing election result – was overshadowed by the disappointment of failing to win a majority and ongoing haggling with the DUP to create stability in the British government…

Continue this story at The Guardian

France: A brand new stage for the Yellow Vests Revolution

Le Pen & Trump aren’t even close – are we stuck with Emmanuel Macr-Obama?