This year the World Social Forum is being held in Montreal, regrouping committed social activists, anti-war collectives and prominent intellectuals.

Most of the participants are unaware that the WSF is funded by corporate foundations including Ford, Rockefeller, Tides, et al. Much of this funding is channelled to the WSF organizers under the helm of the WSF International Council.

This is an issue which has been raised on numerous occasions with progressive organizations and WSF activists: you cannot effectively confront neoliberalism and the New World Order elites and expect them to finance your activities.

The World Social Forum operating under the banner of “Another World is Possible” was founded in 2001 at its inaugural venue of Porto Alegre. Brazil.

From the outset in 2001, the WSF has been upheld as an international umbrella representing grassroots people’s organizations, committed to reversing the tide of globalization. Its stated intent is to challenge corporate capitalism and its dominant neoliberal economic agenda.

The World Social Forum at its inaugural meeting defined itself as a counter-offensive to the World Economic Forum (WEF) of business leaders and politicians which meets annually in Davos, Switzerland. The 2001 Porto Alegre WSF was held simultaneously with that of the WEF in Davos.

While there have been many important accomplishments of the WSF, largely as a result of the commitment of grassroots activists, the core leadership of WSF –rather than effectively confronting the New World Order elites– has (often unwittingly) have served their corporate interests. In this process, co-optation has been achieved through the corporate funding of the WSF.

Among the two major accomplishments are the participation of the WSF in the February 2003 Worldwide protest against the US led war on Iraq. The WSF has also supported progressive movements and governments, particularly in Latin America.

In contrast, at the Tunis 2013 WSF, the final declaration paid lip service to to the US sponsored “Syrian opposition”. Similarly, the Al Qaeda affiliated Libya Islamic Fighting Group (LIFG), which allegedly led the “Arab Spring” against the government of Muammar Gaddafi, was tacitly upheld as a revolutionary force. Several workshops on Libya applauded Western military intervention. A session entitled “Libya’s transition to democracy” focused on “whether Libya was better off without Muammar Gaddafi.”

From the outset in 2001, the World Social Forum was funded by governments and corporate foundations, including the Ford Foundation, which has ties to US intelligence.

The anti-globalization movement is opposed to Wall Street and the Texas oil giants controlled by Rockefeller, et al. Yet the foundations and charities of Ford, Rockefeller et al will generously fund progressive anti-capitalist networks as well as environmentalists (opposed to Wall Street and Big Oil), etc. with a view to ultimately overseeing and shaping their various activities.

The mechanisms of “manufacturing dissent” require a manipulative environment, a process of arm-twisting and subtle co-optation of a small number of key individuals within “progressive organizations”, including anti-war coalitions, environmentalists and the anti-globalization movement. Many leaders of these organizations have in a sense betrayed their grassroots.

The corporations are funding dissent with a view to controlling dissent.

The Ford Foundation (which has links to the CIA) provided funding under its “Strengthening Global Civil Society” program during the first three years of the WSF.

When the WSF was held in Mumbai in 2004, the Indian WSF host committee declined support from the Ford Foundation. This in itself did not modify the WSF’s relationship to the donors. While the Ford Foundation formally withdrew, other foundations positioned themselves.

The WSF (among several sources of funding is supported by a consortium of corporate foundations under the advisory umbrella of Engaged Donors for Global Equity (EDGE).

This organization, which previously went under the name of The Funders Network on Trade and Globalization (FTNG), has played a central role in the funding of successive WSF venues. From the outset in 2001, it had an observer status on the WSF International Council.

Several members of the EDGE BoD, however, are from non-corporative and family foundations with a social mandate. (see below). 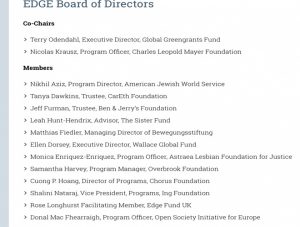 In one of its key documents (2012), entitled Funders Network Alliance In Support of Grassroots Organizing and Movement-Building (link no longer available), EDGE acknowledged its support of social movements which challenge “neoliberal market fundamentalism,” including the World Social Forum, established in 2001:

“From the Zapatista uprising in Chiapas (1994) to the Battle in Seattle (1999) to the creation of the World Social Forum in Porto Alegre (2001), the TINA years of Reagan and Thatcher (There Is No Alternative) have been replaced with the growing conviction that “another world is possible.” Counter-summits, global campaigns and social forums have been crucial spaces to articulate local struggles, share experiences and analyses, develop expertise, and build concrete forms of international solidarity among progressive movements for social, economic and ecological justice.”

But at the same time, there is an obvious contradiction: another world is not possible when the campaign against neoliberalism is financed by an alliance of corporate donors firmly committed to neoliberalism and the US-NATO military agenda.

The following is the EDGE Montreal WSF Communique. The donors not only fund the activities, they also influence the structure of the WSF venue, which was determined in Puerto Alegre in 2001, namely the decentralized and dispersed mosaic of “do it yourself” workshops.

With regard to the Montreal WSF, the Consortium of Donors (EDGE) intent is:

“…to develop an intersectional space for funders and various movement partners – organizers thought leaders and practitioners – to build alignment by cultivating a shared understanding of the visions, values, principles and pathways of a “just transition.” (See http://edgefunders.org/wsf-activities/)

“Just Transition” implies that social activism has to conform to a “shared vision” with the corporate foundations, i.e. nothing which in a meaningful way might upset the elite structures of global capitalism.

From the standpoint of the corporate donors, “investing in the WSF” constitutes a profitable (tax deductible) undertaking. It ensures that activism remains within the confines of ”constructive dialogue” and “critique” rather than confrontation. Any deviation immediately results in the curtailment of donor funding:

“Everything the [Ford] Foundation did could be regarded as “making the World safe for capitalism”, reducing social tensions by helping to comfort the afflicted, provide safety valves for the angry, and improve the functioning of government (McGeorge Bundy, National Security Advisor to Presidents John F. Kennedy and Lyndon Johnson (1961-1966), President of the Ford Foundation, (1966-1979))

The limits of social dissent are thereby determined by the “governance structure” of the WSF, which was tacitly agreed upon with the funding agencies at the outset in 2001.

The WSF has no leaders. All the events are “self-organized”. The structure of debate and activism is part of an an “open space” (See y Francine Mestrum, The World Social Forum and its governance: a multi-headed monster, CADTM, 27 April 2013, http://cadtm.org/The-World-Social-Forum-and-its ).

This compartmentalized structure is an obstacle to the development of a meaningful and articulate mass movement.

How best to control grassroots dissent against global capitalism?

Make sure that their leaders can be easily co-opted and that the rank and file will not develop “forms of international solidarity among progressive movements” (to use EDGE’s own words), which in any meaningful way might undermine the interests of corporate capital.

The mosaic of separate WSF workshops, the relative absence of plenary sessions, the creation of divisions within and between social movements, not to mention the absence of a cohesive and unified platform against the Wall Street corporate elites, against the fake US-sponsored “global war on terrorism”, which has been used to justify US-NATO’s ”humanitarian R2P interventions (Afghanistan, Syria, Iraq, Libya, Ukraine, etc).

The corporate agenda is to “manufacture dissent”. “The limits of dissent” are established by the foundations and governments which ultimately finance this multimillion dollar venue. The financing is twofold:

1. Core financing of the WSF Secretariat and the Costs of the WSF venue.

2. Many of the constituent NGOs which participate in the venue are recipients of donor and/or government support.

3. The WSF venue in Montreal also receives funding from the Government of Canada as well as from the Quebec provincial government.

What ultimately prevails is a ritual of dissent which does not threaten the New World Order. Those who attend the WSF from the grassroots are often misled by their leaders. Activists who do not share the WSF consensus will ultimately be excluded:

“By providing the funding and the policy framework to many concerned and dedicated people working within the non-profit sector, the ruling class is able to co-opt leadership from grassroots communities, … and is able to make the funding, accounting, and evaluation components of the work so time consuming and onerous that social justice work is virtually impossible under these conditions” (Paul Kivel, You Call this Democracy, Who Benefits, Who Pays and Who Really Decides, 2004, p. 122 )

“Another World is Possible” is nonetheless an important concept, which characterizes the struggle of the peoples’ movements against global capitalism as well as the commitment of thousands of committed activists who are currently participating in the Montreal 2016 WSF.

Activism is being manipulated: ”Another World is Possible” cannot, however, be achieved under the auspices of the WSF which from the outset was funded by global capitalism and organized in close liaison with its corporate and government donors.

The important question for activists in Montreal:

We call upon participants of the Montreal World Social Forum (WSF) to raise and debate these issues: the campaign against neoliberalism is financed by corporate foundations (and governments) which are firmly committed not only to the tenets of neoliberalism but also to the US-NATO led military agenda.

Why would they fund organizations which are actively campaigning against war and globalization? The answer is obvious. …

Prof. Michel Chossudovsky is a Canadian economist and author. He is a professor of economics at the University of Ottawa and the president and director of the Centre for Research on Globalization.

The farcical relations of EU countries with Russia – case in point, Italy

Why We Will Fight World War III