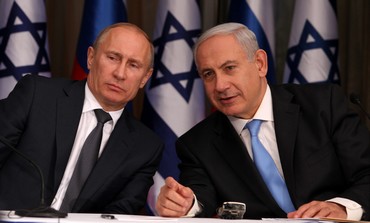 Soon to be at war?

In Ezekiel chapters 38 and 39, it is revealed that Russia will invade Israel. We are fast approaching this moment. World War III will not likely begin with a showdown between the United States and Russia. It will begin with Putin’s Russian forces in Syria attacking Israel.

On September 30, 2015, Reuters reported that he United States, in responding to Russia’s air strikes in Syria, near Homs, did not react favorably. The Secretary of Defense Ash Carter chastised Russia on for escalating the conflict by stating that Russia’s reckless actions were equivalent to “pouring gasoline on a fire.”

Carter strongly criticized the Russian military action that took many in Washington off guard as it served to heighten suspicion regarding the true nature of Russian intentions, in Syria, just two days after Putin told Obama that he was only committed to defeating ISIS. This article will reveal that Putin is not only committed ISIS, Putin is ready to eliminate any threat to Syria and its Iranian partners, including Israel.

A Defense Secretary At a Loss for Words

Secretary of Defense Carter stated that “We have been observing Russian activities, and I don’t want to go into detail about that at this time, but one of the reasons the Russian position is contradictory, is exactly the potential for them to strike as they may well have, in places where ISIL is not present.”

What Carter is clearly saying, is that Russia is not in Syria to eradicate ISIS/ISIL. Russia is in Syria to ERADICATE ALL THREATS TO ASSAD AND TO GAIN A MILITARY FOOTHOLD IN THE MIDDLE EAST!

Carter went on to say that “Others are present. The result of this kind of action will inevitably be simply to be to inflame the civil war in Syria.” The phrase inflame the war in Syria strongly hints at a Russian escalation to World War III.

Carter’s Comments Are Only the Tip of the Iceberg

What is not being reported in the Main Stream Media is that Russian President Vladimir Putin is concerned about Israel’s repeated rocket attacks in Syria, and Putin is ready to confront the situation. My military sources tell me that Putin warned Obama in their September 29th meeting that he had better use his influence with Israel and back the IDF down. Israel, on the other hand, has no intention of allowing the Syrian backed forces to threaten Israeli settlements on the Golan Heights. Subsequently, the stage is set for a confrontation between Israel and Russia over the IDF’s actions towards Syria. On the other hand, the IDF is determined to eliminate any Syrian threat toward their country. This is a case of the irresistible force meets the immovable object.

What is not being reported in the mainstream media, but I have been able to confirm through my sources is that on September 27th, Israeli forces targeted a series of targets inside of Syria following an attack upon Golan emanating from Syrian forces loyal to Assad, who is, in turn, allied with Putin.

Partial confirmation of the sources for The Common Sense Show comes from the DEBKA File as they are reporting the IDF attack and Putin’s response.

According to the Debka File, last Sunday night, the IDF hit Syrian military targets with powerful Tamuz artillery rockets after two errant Syrian rockets landed on the Golan. DEBKA File’s military sources further reported that the IDF hit the artillery command post of the Syrian army’s 90th Brigade, which is stationed outside Quneitra. Syrian and Lebanese sources say the Syrian deputy commander was injured. The military sources for The Common Sense Show cannot confirm the details as to the specific unit and the total number of casualties. Military sources only can confirm that an IDF attack on Syria did indeed take place following a provocation by Syrian forces.

Putin issued a strong warning to Israel that these attacks will cease. Subsequently, this development adds, yet, another dimension to the number of flash points which could result in World War III. Ask yourself a question. What will Putin do when one of the IDF’s attacks upon Syria kills members of the Russian military? It does not take a “rocket scientist” to say World War III.

More information was made available by The Common Sense Show sources with regard to Russian intentions in Syria. One of The Common Sense Show’s confidential retired military sources strongly believes that Russia’s presence and recent actions in Syria is historically similar to what the Nazis did during the Spanish Civil War which took place from 1936-1939.

The Spanish Civil War amounted to the opening battle of World War II. Among the tragic events of the Spanish Civil War, the German Nazis were permitted to use the conflict to test the prowess of their developing blitzkrieg tactics which would eventually be unleashed against Poland and Russia.

On September 30, 2015, The Common Sense Show learned that Russia has more than likely anticipated that its bombing of Homs was accompanied by the US “locking on to the rogue Air Force action by the Russians”. The Russians more than likely anticipated that they would be locked on and this provided them with opportunity to test the United States’ response time and the nature of their surveillance technology so it could be negated at a later time. The source stated that this was hardly a revelation and than many in the military are already aware of this, but nobody is stating the obvious and the MSM is certainly not going to report this either.

As the Chinese warships have made their way through the Suez Canal and are presumably entering Syria, it is likely that they are conducting their own beta tests during Russia’s provocative actions under America and Israel’s watchful eye. In other other words, both Russia and China are using the conflict to gather intelligence on a potential US response by observing the US’ early warning detection system of the Russian Air Force action.

When President Obama and Secretary of State, John Kerry, sold out US defense interests by signing a nuclear treat with Iran, the President should have changed his name to Neville Chamberlain, and that the nuclear arms treaty was the modern day equivalent of the Munich Accords.

It seems possible that world history might have proceeded differently had the democracies taken a strong stand against fascism in Spain in 1936. However, when Hitler and Neville Chamberlain inked the Munich Accords, it was clear that the allies were not going to make a stand against aggressive German military actions. History has clearly demonstrated that Chamberlain had his finger on the “chicken switch” as he bargained away all leverage that the allies would have had to check Hitler’s aggressiveness. History has just repeated itself with regard to the Nuclear treaty with Iran and Russian military incursions into Syria agreed to by Barack “Neville” Hussein Obama. Is Obama purposely allowing this to happen? At this point, it does not matter. It is 1939 and the world is ready to get a rude awakening.

Three days ago, when Putin and Obama spoke about Russian intentions in Syria, Obama was duped by a master deceiver and Obama unwittingly played the role of one of the biggest losers in world history, Neville Chamberlain. With Obama agreeing to Russian military action in Syria, Obama has opened the door to the Russians, the Chinese and the Iranian gaining a firm foothold in the Middle East in preparation to war in the Middle East. Israel, by its recent actions has made it clear that they will not tolerate Russia’s incursions into the Middle East on behalf of Syria and Iran. World War III is an incident away.

US Congresswoman Introduces Bill To Stop “Illegal” War On Syria