Why JOKER & ‘The Schiff Show’ were both released in October 2019 It’s no coincidence that the JOKER is already one of the biggest box office hits of 2019.

With a release U.S. date of October 4, 2019, its rise in the firmament of Hollywood blockbusters has closely paralleled the rise of another clown in the American political firmament. And even the Internet proves this point—UNEQUIVOCALLY— as follows! However, there is a very deep and dark back story regarding “Liddle Adam Schiff” that most folks are completely unaware of. Just like the Joker was hiding his deep dark stuff that was ready to break out into the open at any time, so too is Adam Schiff an incorrigible and criminally insane psychopath poised to destroy the Trump administration. As for the real reasons for Schiff’s extreme psychopathology, the following exposé explains the hidden background and history that inspired “The Schiff Show”.

The Secret Back Story Behind the Outright Treason of Adam Schiff

Even more unknown is the historical fact that Adam Schiff’s MO as a political hitman was honed throughout his career for this very moment on the clown stage inside the Beltway.

It’s no accident of fate that California Representative Adam Schiff represents Hollywood. Where else to receive the expert training for an actor-politician being handled by the CIA’s ever-prevaricating Mockingbird Media.

But there’s more — MUCH MORE — to this very bad “crisis actor” known as Adam “Shifty” Schiff. And it concerns the central role that he plays in a much larger plot to, not only take down President Trump, but also to completely take over the American Republic.

In that rapidly unfolding Hollywood-D.C. production, Schiff is being directed by an even bigger clown in the form of one Nancy D’Alesandro Pelosi. Here’s her back story for those who want to see a trailer for the really big picture.

COUP-IN-PROGRESS: Pelosi, the Mafia and the Black Nobility

You Can’t Make This Schiff Up!

The more serious and deadly the conspiracy, the more they dress up the frontmen like clowns.  Remember how fateful and fatal the JOKER turned out to be—FOR EVERYONE INVOLVED.

Since Hollywood and Washington, D.C. have always been joined at the hip, both literally and figuratively, the highly deceptive “Schiff Show” directed by “Perfidious Pelosi” has nefarious ambitions that go far beyond the obvious.

While both of these Democrat clowns have inspired so much clown art on the World Wide Web, the global audience is unknowingly getting caught up in a labyrinthine web of deceit and treachery. This massive psyop is not only being implemented with purposeful design, it was conceived to have great consequences for the American Republic.

KEY POINT: There’s a very good reason why the Italian-American woman from San Fran is handling the Jewish American man from LA. Not only are women superior manipulators, those of Italian ancestry possess millennia of cultural memory vis-à-vis the ascendancy of the Roman Empire (See PEDOGATE: Women Operatives In Very High Places). Similarly, men raised in the Judaic tradition become trained as highly skilled word merchants at a very young age. That’s why all the best “Philadelphia lawyers” were originally schooled in Hebrew—the ultimate language of sophistry and manipulation. See: How Lawyers Wrecked America and Ruined the World

The only good ending to this “Schiff Show” is one where the really evil clown, who has been faking it to the great detriment of his audience, gets “hooked off the stage”. Likewise, the “Wicked Witch of the Left Coast” needs to be removed from the street before she begins the next phase of this ongoing COUP BY LAWFARE.

If ever the American people need to wake up to the self-evident fact that the barbarians are not at the gate, THE BARBARIANS ARE INSIDE THE GATE, that time is right now. Especially in light of the stark reality that they have had many decades to perpetrate their treasonous plots and intrigues.

Destroying the USA from within by implementing their devastating agenda of Cultural Marxism was the primary pillar of the New World Order globalist cabal. With the fabric of American society irreparably torn, the NWO perps have accelerated considerably the end-game of this fundamentally communist conspiracy to collapse the American Republic.

CAVEAT: There’s always a societal tendency to not take these shit shows seriously. Adam Schiff and Nancy Pelosi are so over the edge of sanity that their sheer malevolence is easily underestimated. That’s exactly what happened to the many victims who fell prey to the Joker, an extremely deranged predator who hid his violent intentions even from his own mother (who was also killed by him).

“The Schiff Show” is only one of numerous “October Surprises” planned by Deep State that will be carried out to topple Trump and complete the Democrat’s communist takeover of the USA. The NWO perps usually execute these shock and awe surprises during the October just before Election Day. However, this election cycle things will go down in a totally different way. The body politic should expect an unprecedented series of “October Surprises” over the next 12 months. Everything points to a truly hellacious roller coaster ride; so hang on tight and don’t let “The Schiff Show” fool you. At the end of the day, the righteous are always victorious when these epic wars between the forces of light and the forces of darkness are concluded.

The authors wish to express their deep appreciation to those many graphic artists who created the excellent clown art posted above. SOTN takes no credit for any of these outstanding works of art.

Final image by TLB Staff (we couldn’t help ourselves) 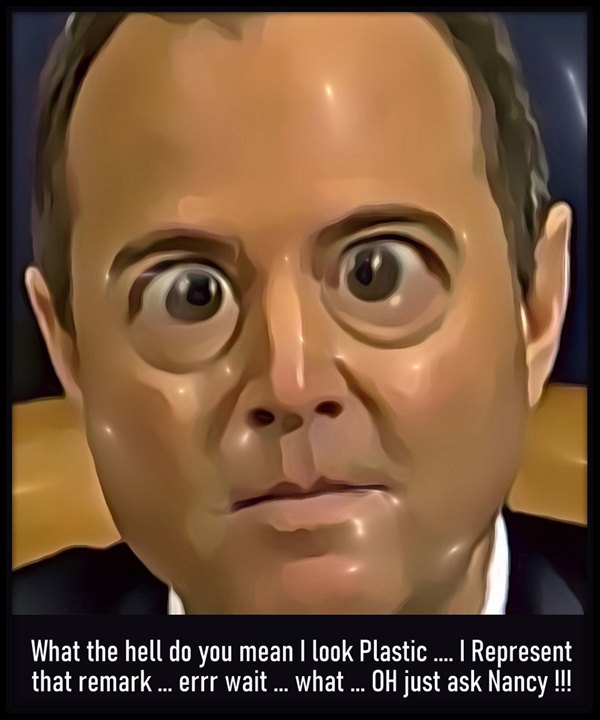 This article (SCHIFFgate: A Deep State Op & CIA-directed Coup Goes Prime Time Led by a Clown) was originally created and published by State of the Nation and is printed here under “Fair Use”(see disclaimer below) with attribution State of the Nation.

After Mueller Debacle, Where Do Democrats Go?

Hollywood, MSM and Silicon Valley: All Strings Pulled By The Same Master