Wikileaks has released their fourth set of leaks from the OPCW’s Douma investigation, revealing new details about the alleged deletion of important information regarding the fact-finding mission.

RELEASE: OPCW-Douma Docs 4. Four leaked documents from the OPCW reveal that toxicologists ruled out deaths from chlorine exposure and a senior official ordered the deletion of the dissenting engineering report from OPCW’s internal repository of documents.https://wikileaks.org/opcw-douma/

“One of the documents is an e-mail exchange dated 27 and 28 February between members of the fact finding mission (FFM) deployed to Douma and the senior officials of the OPCW. It includes an e-mail from Sebastien Braha, Chief of Cabinet at the OPCW, where he instructs that an engineering report from Ian Henderson should be removed from the secure registry of the organisation,” WikiLeaks writes. Included in the email is the following directive:

“Please get this document out of DRA [Documents Registry Archive]… And please remove all traces, if any, of its delivery/storage/whatever in DRA.’”

According to Wikileaks, the main finding of Henderson, who inspected the sites in Douma, was that two of the cylinders were most likely manually placed at the site, rather than dropped.

“The main finding of Henderson, who inspected the sites in Douma and two cylinders that were found on the site of the alleged attack, was that they were more likely manually placed there than dropped from a plane or helicopter from considerable heights. His findings were omitted from the official final OPCW report on the Douma incident,” the Wikileaks report said.

It must be remembered that the U.S. launched an attack on Damascus, Syria on April 14, 2018 over alleged chemical weapons usage by pro-Assad forces at Douma.

Another document released Friday is minutes from a meeting on 6 June 2018 where four staff members of the OPCW had discussions with “three Toxicologists/Clinical pharmacologists, one bioanalytical and toxicological chemist” (all specialists in chemical weapons, according to the minutes).

Minutes from an OPCW meeting with toxicologists specialized in chemical weapons: “the experts were conclusive in their statements that there was
no correlation between symptoms and chlorine exposure”.https://wikileaks.org/opcw-douma/#OPCW-DOUMA%20-%20Release%20Part%204 … 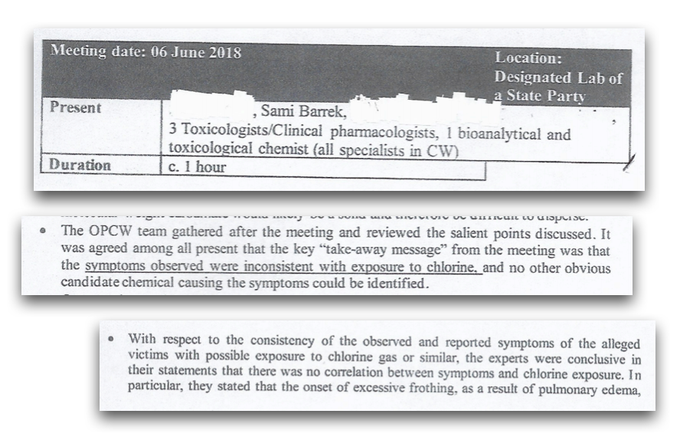 8:12 AM – Dec 27, 2019
The purpose of this meeting was two-fold. The first objective was “to solicit expert advice on the value of exhuming suspected victims of the alleged chemical attack in Douma on 7 April 2018”. According to the minutes, the OPCW team was advised by the experts that there would be little use in conducting exhumations. The second point was “To elicit expert opinions from the forensic toxicologists regarding the observed and reported symptoms of the alleged victims.”

More specifically, “…whether the symptoms observed in victims were consistent with exposure to chlorine or other reactive chlorine gas.”

According to the minutes leaked Friday: “With respect to the consistency of the observed and reported symptoms of the alleged victims with possible exposure to chlorine gas or similar, the experts were conclusive in their statements that there was no correlation between symptoms and chlorine exposure.”

The OPCW team members wrote that the key “take-away message” from the meeting was “that the symptoms observed were inconsistent with exposure to chlorine and no other obvious candidate chemical causing the symptoms could be identified”.

How To Survive The Civil Unrest That’s Coming To America

The Forgotten Rotten Egg in the Russia-Trump Hoax