Of note, striking union members are now marching alongside the Yellow Vests just in the past few days. And the government is attempting to cherrypick certain sectors, such as ballet dancers who must retire at a little over 40. They are refusing to be bought off, however. This RT report mentions airline personnel as being targeted successfully by the government to stop striking. The government already promised that police pensions would not be affected so as to keep the police on side as the General Strike got underway on December 5.

The strike seems to be garnering a fair amount of public support, with donations to support the striking workers coming in. It’s also on the verge of becoming one of the longest strikes in recent French history, comparable to the famous strikes of 1986/7 and 1995. 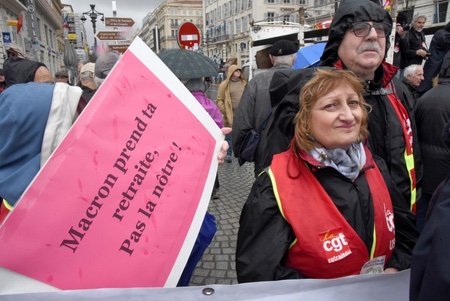 “Macron, take your retirement, not ours!”

See also this report from WSWS titled Amiens railworkers vote to continue strike against French President Macron. Amiens is Macron’s home town. At ER it needs to be said, we do not endorse a world socialist vision, on the contrary, but WSWS provides solid reporting on key issues. We are republishing one of their articles below.

We endorse the WSWS’ distrust of French unions. They are heavily subsidized by the French government (he who pays the piper …) and are notorious for getting deals for themselves while turning their backs on everybody else. Striking workers, too, are now distrustful as the report below indicates; the Gilets Jaunes will rightly not associate with them.

And we have to agree with the phrase below, ‘international resurgence of class struggle’. It is indeed working class people (but not only them) who have been shafted through decades of globalist-imposed ‘austerity,’ during which time their jobs were shipped out to cheaper countries; protests against it are now surfacing around the world.

The ongoing mass transit and public sector strike, which is paralyzing much of transport in France to protest Macron’s pension cuts, entered its fourth week today (ER: December 27). Despite attempts by the union bureaucracies to impose a “Christmas truce” by suspending all action beyond the local level, strikers continue to march and protest against the pension cuts, knowing that they have a broad majority of the population behind them.

Yesterday, as strike committee meetings of rail and mass transit workers voted to continue the action, strikers spoke to WSWS journalists in Paris. They demanded stepped-up action against Macron in order to definitively crush the state’s ability to impose such socially regressive cuts on the workers. At the same time, they all stressed workers’ growing mistrust towards the trade union bureaucracies, who are negotiating with the state behind the backs of the workers.

“This is what we call a rank-and-file protest. Yes, you will see some trade union stickers here and there, but for three-quarters of us, it has gone beyond the question of union membership, it is really the workers who are speaking. Today the rank-and-file called this demonstration. We are sending a message to the government and the union heads: there will be no holiday truce.”

Raphaël stressed that workers are in a struggle against not only the state but also its maneuvers with the union bureaucracy:

“Today we are protesting because we do not want this cut. It is absolutely not that the union leaders called these strikes, it was very much on our own initiative. We did it ourselves, as worker-citizens. So we are sending a message to both the union bureaucrats and to the government: no, this package will not pass. We will not tolerate it, and we will not tolerate you.”

Such sentiments underscore the basic need for workers to form their own committees of action, independent of the unions. With workers in France entering into a political struggle with the state and with the major banks and financial aristocracy around the world, it is critical for workers to be able to unify these struggles and organize them independently of such nationally-based bureaucracies, which are closely tied to Macron. 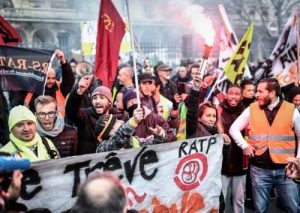 Raphaël stressed that as they strike, RATP workers are conscious of representing the interests of workers and of the broad majority of the French population. Beyond a tiny majority of super-rich individuals, he noted, no one will benefit from the reform:

“If you look at everything, the passage to a system of pensions by ‘points’ of indeterminate value, encouraging retirement investment accounts, increasing the pension age—it is not good for the French citizen, for the worker.”

Above all, strikers are increasingly conscious that they are participating in an international resurgence of class struggle that is exposing the great objective conflicts within society. After decades in which austerity policies were imposed across Europe after the Stalinist restoration of capitalism in the Soviet Union in 1991, the working class is launching its first major, international counteroffensive.

“Of course we are defending our people, our wages, our conditions in the entire world,” Raphaël said. “It is a free market policy that did not start yesterday. It has lasted 20, 30 years. And yes, for now, the wealthy have won. But we also can win … We get up each morning, by the sweat of our brow, and we all go work. We are honest people, we make the economy run, we pay our taxes, we buy things, all that.”

Asked about this international resurgence—with auto and teachers strikes in America and Poland, and mass protests against dictatorships in Algeria, Iraq, Bolivia and Chile—Raphaël stressed that the awareness of this broader international struggle was steeling workers in France.

“We produce, produce, and we are to receive less even as we produce more. After a while, it is just not possible anymore. So I support workers in the entire world. I know already that what happened with the ‘yellow vests’ over the last year has had an impact on the entire world. I know that the strikes we are carrying out are reported all the way to South America, we get many videos from South American rail workers who support us and tell us not to give up, because you are showing the way … So we do not want to give up.”

A class confrontation is rapidly emerging between the workers and the Macron government, which has declared that it will ram its pension cuts through Parliament in February. In this struggle, the only viable strategy for the workers is to struggle to bring down Macron, appealing to the solidarity of workers around the world for a fight to transfer state power to bodies of struggle created by the working class. In France and worldwide, the dynamic of the class struggle is drawing workers into a revolutionary confrontation with the financial aristocracy. 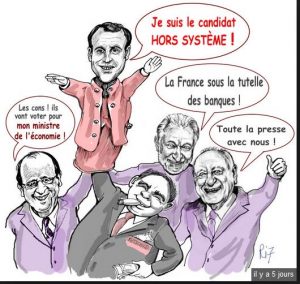 Raphaël stressed the anger building among the workers at the class arrogance of Macron, a former investment banker, and of ruling circles more broadly.

“They lack respect, we have seen this for some time in the way they speak about workers and French citizens as a general rule. They call us toothless people, undisciplined primitives. Macron said there are many illiterates and alcoholics. This is class arrogance. Listen to Gérald Darmanin (a member of Macron’s party), who advises him to get closer to the people, to see people who drink beer and eat with their hands. We have now had enough of this.”

Pascal, a photographer and “yellow vest,” also stressed the class arrogance of French ruling circles, including the union bureaucrats. “No, they did not help us,” he said. “The union bureaucracies now they are quote-unquote calling the ‘yellow vests’ to come support the strike. But … the unions in fact do not really want to hear anything about us. There is a class rejection on their part. The ‘yellow vests’ are really as low as they are willing to go speak to, they say we are violent, that we are neo-fascists, and on and on.”

Pascal stressed his deep distrust of the “dialogue” between the state and employers’ organizations with the union leaders:

“It is a power game, individuals trying to get power. After they all end up owing each other things and they cut deals. Now it is the rank-and-file, the citizens and the workers to participate in decision-making.”

Raphaël explained, “I am a worker, I started working at sixteen. Now I do not intend to continue working until I am 66, 68, 70. That is inappropriate. I want a decent retirement and to have time to enjoy it, as well. We are not here just to work endlessly for a few people who will take all the wealth that we produce.”

Political Nightmares Multiply for EU Ahead of Davos