This is the first of a 2-part series

The introduction of genetically modified crops has corresponded with increasing monopolization of seed by biotechnology companies and higher seed costs that have led to tragedies in some countries, while pushing out conventional, non-GMO seeds, and reducing farmer seed choices. These impacts are being seen in the United States, Brazil, India, the Philippines, and South Africa, and even Europe.

According to Philip Howard, a researcher at Michigan State University, economists say that when four firms control 40% of a market, it is no longer competitive. According to AgWeb, the “big four” biotech seed companies—Monsanto, DuPont/Pioneer Hi-Bred, Syngenta, and Dow AgroSciences—own 80% of the US corn market and 70% of the soybean business.

Monsanto has become the world’s largest seed company in less than 10 years by capturing markets for corn, soybean, cotton, and vegetable seeds, according to a report by the Farmer to Farmer Campaign. In addition to selling seeds, Monsanto licenses its genetically modified traits to other seed companies. As a result, more than 80% of US corn and more than 90% of soybeans planted each year contain Monsanto’s patented GM traits.

Other factors that have led to industry domination by a few players include purchase of smaller seed companies by larger companies, weak antitrust law enforcement, and Supreme Court decisions that allowed GM crops and other plant materials to be patented, while prohibiting seed saving by farmers.

The US Department of Justice (DOJ) investigated Monsanto’s dominance of the seed market after holding public meetings in 2010 where farmers described the company’s practices. But at the end of 2012, DOJ announced it had “closed its investigation into possible anticompetitive practices in the seed industry.”

Diana Moss, vice president of the American Antitrust Institute, told Mother Jones food blogger Tom Philpott, “To have a two-year investigation and close it without a peep in our view does a disservice.”

Tamara Nelsen, senior director of commodities at the Illinois Agricultural Association, compares Monsanto to Microsoft, a company that was prosecuted by DOJ for anti-trust violations. “Ninety-three percent of soybean production is Roundup Ready,” Nelsen told Nature Biotechnology. “It’s still like everyone is on a Microsoft system—at least, that’s how farmers feel.”

Another indication that the seed market has become monopolized is the escalating prices for GM seed. Moss points out that in competitive markets, technologies that enjoy widespread and rapid adoption—such as GM crops—typically experience steep declines in prices.

The opposite has occurred with GM crops. Charles Benbrook, research professor at the Center for Sustaining Agriculture and Natural Resources, Washington State University, writes that from 2000 to 2010 as GM soybeans came to dominate the market, the price for seed increased 230%. The cost for Monsanto’s Roundup Ready2 soybeans in 2010 was $70 per bag, a 143% increase in the price of GM seed since 2001.

According to the US Department of Agriculture’s Economic Research Service, the average per-acre cost of soybean and corn seed increased 325% and 259%, respectively, between 1995 and 2011. This is roughly the time period when acreage of GM corn and soy grew from less than 20% to more than 80-90%

Moss says that the escalating prices for GM seeds are outstripping increases in grain prices earned by farmers, resulting in farmers being squeezed by higher costs with less returns.

“Destroying the lives of many farmers around the world”

Problems resulting from escalating prices for GM seed are seen most dramatically—and tragically—in developing countries. According to a study by Consumers International, an estimated 270,000 small-hold farmers in the Philippines are being forced to grow GM corn and ending up in debt. The cost of corn seeds has risen 282% from its introductory price and accounts for 18-21% of a farmer’s total cost of production. Farmers are at the mercy of seed suppliers and lenders who are one and the same in the country and refuse to provide lending unless the farmers grow GM corn.

The impacts of high GM seed prices are even worse in India where more than 250,000 peasant farmers have committed suicide since 1998, or about one every 30 minutes. Indian farmers grow GM Bt cotton, which accounts for 95% of all cotton acres in the country. According to a report by the New York Times, the seeds can cost between 700 to 2,000 rupees ($38) per bag or about three to eight times the cost of conventional seeds. Similar to the situation in the Philippines, Indian farmers go into debt to buy the expensive GM seeds and pesticides. If their crops fail, many farmers kill themselves by drinking pesticides.

The suicides began before the introduction of GM cotton, but GM cotton has exacerbated the problem, according to an advisory from the Indian government, which stated, “Cotton farmers are in a deep crisis since shifting to Bt cotton. The spate of farmer suicides in 2011–12 has been particularly severe among Bt cotton farmers.” A PBS documentary, “Seeds of Suicide,” has also implicated expensive GM seeds and pesticides in the indebtedness and resulting suicides.

According to John Vandermeer, professor of ecology and evolutionary biology at the University of Michigan, genetically modified seeds are “destroying the lives of many farmers around the world right now.”

(Part two of this series next month will focus on restricted availability of non-GMO seeds and reduced farmer choices in the United States, Europe, Brazil, and South Africa) 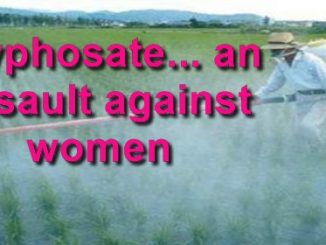