If you believe Vladimir Putin, Main Stream Media and the Military Industrial Complex, you better head for your Bomb Shelter the next time Putin gets heart-burn or feels any discomfort brought on by world events. According to Putin, the Russian Military has developed some “super duper” weapons that the rest of the Global Powers can’t hold a candle to with what they have in their inventory.

For my money, the only reason Putin cranked up the Military Defense Rhetoric was to bring some ‘raz-ma-taz’ to an otherwise (yawn) boring State of The Nation address. If you are not up to speed about who is saying what about what I offer this video. (Stick with me… after this video we will get into the “juicy” part of the story.)

All of the presiding goings on is a sample of a subject being played out to the advantage of all involved and concerned… except for Mr. and Mrs. America.

Putin gets to command the World Stage, making himself look at lot taller than his  believed to be 5ft 2” to 5ft 5.”

Main Stream Media gets to put in place their ‘marching orders’ from Deep State telling readers and viewers we have to keep up with Russia, or the sky will fall.

The Military Industrial Complex gets to “pump up the fear factor” and peddle it to the American People and our NATO allies, enabling them to raid the U.S. Treasury of tax payer dollars as they shop for a War to fight.

Yes everyone gets what they want… Prestige, thought control and money.

Now to the Juicy part

All of this Russian War Technology that is supposedly ‘light years’ ahead of everyone else on the globe in the air, on land, on and under the sea is… (no nice way to put it)… is Bovine Excrement.

The Military Industrial Complex (noun: A country’s military establishment and those industries producing arms or other military materials, regarded as a powerful vested interest.) has had much of Putin’s “Star Wars” wish list researched and operational during the last 50 years.

I make this statement with confidence and the backing of ex-military and government connected members that are part of The Liberty Beacon Project. How do you say… They Were There and/or worked for a Civilian Contractor.

Rolling out some history

Aurora also known as SR-91 Aurora is the popular name for a hypothesized American reconnaissance aircraft, believed by some to be capable of hypersonic flight at speeds of Mach 5+. According to the hypothesis, Aurora was developed in the 1980s or 1990s as a replacement for the aging and expensive SR-71 Blackbird. ~Logic Earth

A friend of mine, George Knapp a long time reporter at Channel 8 in Las Vegas, has been tracking the Black Ops programs for years at Area 51 and beyond…

More evidence that nothing is new to the Super Powers….

U.S.-Russia-China Cooperation Could Hinder the Proliferation of Hypersonic Missiles

Hypersonic missiles are a new class of threat that could penetrate most missile defenses and compress the timelines for a nation under attack to respond. The United States, Russia, and China should agree not to export hypersonic missile systems or components to other nations.

In May 2015 The Christian Science Monitor carried this story…  (excerpt)

Why the US is testing hypersonic weapons

The US Air Force has developed a hypersonic engine as part of a program to create a class of weapons so fast and accurate that they could reach any target in the world within an hour.

LOS ALAMOS, New Mexico — There is a new breed of weaponry fast approaching–and at the speed of light no less. They are labeled “directed-energy weapons” and may well signal a revolution in military hardware–perhaps more so than the atomic bomb.

Directed-energy weapons take the form of lasers, high-powered microwaves, and particle beams. Their adoption for ground, air, sea, and space warfare depends not only on using the electromagnetic spectrum, but also upon favorable political and budgetary wavelengths too.

That’s the outlook of J. Douglas Beason, author of the recently published book:The E-Bomb: How America’s New Directed Energy Weapons Will Change the Way Wars Will Be Fought in the Future (Da Capo Press, October 2005).Beason previously served on the White House staff working for the President’s Science Advisor (Office of Science and Technology Policy) under both the Bush and Clinton Administrations.

Let us not over look NASA and the history of the Militarisation of Space.

A Ground-Based Interceptor, designed to destroy incomingIntercontinental ballistic missiles, is lowered into its silo at the missile defence complex at Fort Greely, Alaska, July 22, 2004.

The militarisation of space is the placement and development of weaponry and military technology in outer space. The early exploration of space in the mid-20th century had, in part, a military motivation, as the United States and the Soviet Union used it as an opportunity to demonstrate ballistic missile technology and other technologies having the potential for military application. Outer space has since been used as an operating location for military spacecraft such as imaging and communications satellites, and some ballistic missiles pass through outer space during their flight. As yet, however, weapons have not been stationed in space, with the exception of the Almaz space station and small handguns carried by Russian cosmonauts (for post-landing, pre-recovery use). Excerpt from WikipediA. 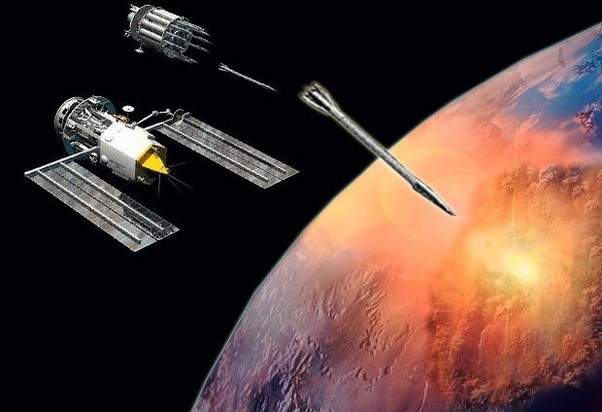 This technology started being discussed the 1950s.

The idea is simple. A cylinder of a dense, tough metal like Tungsten or Uranium is dropped from orbit onto the target, impacting the ground at a speed of 7000 m/s.

The impact force of a telegraph-sized Tungsten rod would be in the order of 11.5 tons of TNT. The smallest nuclear warhead ever built, the US military’s ‘Davy Crockett’, had a yield of 10–20 tons. So, technically, it is as destructive as a small nuclear device, though without any nuclear fallout.

There is more… so much more. We didn’t even get our feet wet with the Military activities going on in and under our Oceans. It’s there too with it’s stealth programs.

“There is nothing new under the Sun,” goes the old saying. There is certainly nothing new in world government, main stream media or with the ‘war mongers’… same old play book written by the NeoCons and the George Soros’s of the world. Let’s not forgot Bill Gates and his ilk. I could go on naming names… more names… more dots to connect.

Wake up America. Wake up World. The Inmates are running the Institution. (RE)

KEN’S CORNER: The Evil That Owns Us

Marxist Communism, & the Puppet Masters That Control Us

Worse than the Cuban crisis, but the West’s population kept in the dark