Hillary Clinton and Barack Obama are being roundly criticized for their apparently coordinated decision not to use the word ‘Christian’ to describe the victims of the Easter Sunday bombings in Sri Lanka, which targeted three Catholic churches, among other targets. Some even speculated whether Obama’s and Clinton’s decision was intended to undermine the Christian faith in the US.
Instead of using the label “Christians”, Obama and Clinton referred to the victims of the attacks as “Easter Worshippers”, elicited ridicule from conservatives on Twitter.

The attacks on tourists and Easter worshippers in Sri Lanka are an attack on humanity. On a day devoted to love, redemption, and renewal, we pray for the victims and stand with the people of Sri Lanka.

On this holy weekend for many faiths, we must stand united against hatred and violence. I’m praying for everyone affected by today’s horrific attacks on Easter worshippers and travelers in Sri Lanka.

12:17 PM – Apr 21, 2019
The fact that three churches were targeted would suggest that Sri Lanka’s Christian minority was specifically targeted by the attackers.

What the heck is an Easter worshipper?

The term that these people are going to such painfully ludicrous lengths to avoid using is “Christian”. pic.twitter.com/9pXXB9kXye

Hey @HillaryClinton @BarackObama those “Easter Worshipers” you keep referring to are called #Christians. It is a few more syllables than Muslims but I bet you can say it if you try. Jesus says to love everyone regardless of differences; try it. Praying for #SriLanka #HeIsRisen

Barack Obama and Hillary Clinton referred to those killed on Easter Sunday in Sri Lanka as “easter worshipers in church”. Saying the word Christians would be wrong right? The truth is that we Christians don’t even care, bullshit don’t incite us against the world. Receive sense. 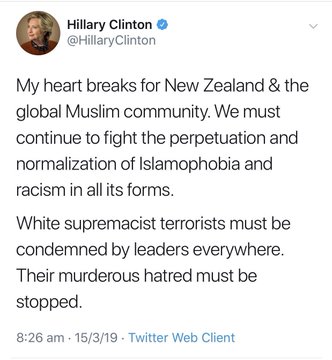 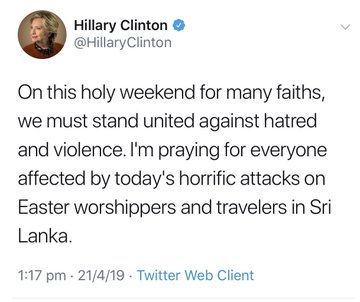 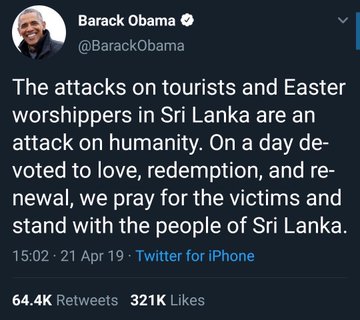 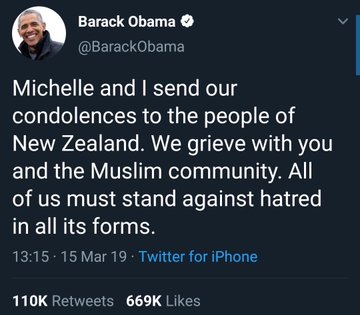 Hillary And Obama Both Refuse To Call The #SriLanka Victims Christians And They Both Won’t Call The Muslims Terrorists But Will Call Out “White Supremacy” For The Christchurch Attack Which 400% Less People Died In. They Will Do Anything To Not Recognize The Radical Islam Religion

Unsurprisingly, Obama and Clinton weren’t the only Democrats who artfully avoided the word “Christian”.