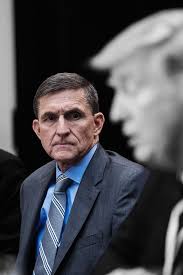 President Donald Trump said on Twitter that he is “strongly considering” pardoning former adviser Michael Flynn after the FBI and Justice Department “destroyed” his life, seemingly confirming the long-standing rumors.

The Mueller investigation may be in the past for many, but Trump put the two-plus year probe back into the spotlight on Sunday by directly answering reports he would pardon Flynn, one of a handful of advisers to face criminal charges from Robert Mueller.

After saying the FBI and Justice Department were “destroying” the lives of Flynn and his “wonderful” family, the president claimed the departments “lost” the former general’s records.

“How convenient,” he tweeted, adding, “I am strongly considering a full pardon!”

So now it is reported that, after destroying his life & the life of his wonderful family (and many others also), the FBI, working in conjunction with the Justice Department, has “lost” the records of General Michael Flynn. How convenient. I am strongly considering a Full Pardon!

Flynn pleaded guilty to “willfully and knowingly” making false statements during the Mueller investigation in 2017, but has since claimed investigators had “concocted” false statements and pressured him into a deal by threatening to “harass” his son by putting him on the witness stand.

After filing a motion to have the charges dismissed, Attorney General William Barr stepped in last month and ordered that the case of the former national security adviser be reexamined as part of a larger probe looking into politically-sensitive national security cases taken on while Trump has been president.

Flynn pleaded guilty to lying about having contact with then-Russian envoy to the US Sergey Kislyak regarding US sanctions. Flynn resigned from the White House in February 2017 amidst the Mueller investigation. The case, however, has come under new scrutiny as it has been revealed the FBI originally did not believe Flynn was lying and one of the agents who’d interviewed him was Peter Strzok, a disgraced official who was later found to be having an affair with lawyer Lisa Page and to have been texting her about the entire investigation being an “insurance policy” against Trump’s presidency.