[TLB Editors note: TLB added videos are at the bottom of Jon’s comments.]

In the early days of the American Republic, George Washington warned against entangling foreign alliances. Flash forward from 1796 to 2017. Last night, masked thugs emerged from a crowed of protestors, at UC Berkeley, and chanted: “No borders, no nations, fuck deportations.” And there you have it. A perfect summary of the Globalist position.

One planetary nation (under one gentle, all-inclusive, loving, iron fist).

George Soros would be smiling. David Rockefeller would be chortling.

SF Gate: “A protest at UC Berkeley over a scheduled appearance by right-wing provocateur Milo Yiannopoulos turned fiery and violent Wednesday night, prompting police to cancel the event and hustle the Breitbart News editor off campus.”

Grabien.com: “Student protesters upset over a speech by writer Milo Yiannopoulos are setting fires and destroying property at Berkeley University Wednesday night…Protesters are leaving campus en route for the town of Berkeley, chanting along the way, ‘No borders, no nations! Fuck deportations!’ After a female Trump supporter concludes an interview with a local reporter, anti-Milo protesters pepper spray her.”

CBS SF: “Protesters armed with bricks and fireworks mounted an assault on the building hosting a speech by polarizing Breitbart News editor Milo Yiannopoulos Wednesday night, forcing the event’s cancellation. UC Berkeley officials said the protest was infiltrated by vandals. As the gathered crowd got more agitated, masked ‘black bloc’ activists began hurling projectiles including bricks, lit fireworks and rocks at the building and police. Some used police barriers as battering rams to attack the doors of the venue, breaching at least one of the doors and entering the venue on the first floor. In addition to fireworks being thrown up onto the second-floor balcony, fires were lit outside the venue, including one that engulfed a gas-powered portable floodlight. At about 6:20 p.m., UC campus police announced that the event had been cancelled. Officers ordered the crowd to disperse, calling it an unlawful assembly. By 8 p.m., a large crowd of people had moved off the campus and onto Telegraph Avenue. They smashed ATMs at a Bank of America branch and set several trash fires on Telegraph Avenue. After marching west on Durant Avenue, the group moved north on Shattuck Avenue, smashing windows and vandalizing a Mechanics Bank branch near the corner of Bancroft Way. Chase and Wells Fargo branches were also vandalized. A Starbucks location near campus was vandalized and looted. Police also received reports that banks were set on fire in the area of Center Street and Shattuck Avenue.”

NBC News: “’The violence was instigated by a group of about 150 masked agitators who came onto campus and interrupted an otherwise non-violent protest’, UC Berkeley said in a statement. Some people were attacked and police treated six people for injuries, the university said… Berkeley College Republicans said before the protests that a ‘groupthink phenomenon’ has taken hold at the California university that silences conservative speech, and while it doesn’t agree with everything Yiannopoulos has said or done ‘we saw the chance to host Milo as an opportunity that was too good to pass up. He is somebody who stands up for those who are too afraid or intimidated to speak out on campus, and he voraciously defends speech from all sides of the political spectrum’, the group said in a statement earlier. After the violence, the group said in a statement: ‘The Free Speech Movement is dead. Today, the Berkeley College Republicans’ constitutional right to free speech was silenced by criminals and thugs seeking to cancel Milo Yiannopoulos’ tour’.”

Don’t like what someone has to say? Shut him down. Destroy property.

“Hillary Clinton is funded by people who murder homosexuals.”

“Now, some of the most dangerous places for women to be in the world are modern, Western, rich European countries. Why? One reason. Islamic immigration – it’s got to stop.”

“Hillary Clinton has shown no indication whatsoever of stemming the tide of Islamic immigration, or stopping our mollycoddling, and pandering to Islam. These things are direct threats. Not just to culture, but to the lives of gay people in America.”

“Feminists want to replace old etiquette rules with a new system of politically-driven language policing, controlled by them and predicated on nebulous hurt feelings and speculative ‘harm’.”

“Virtue signaling can best be explained as the devotion of a person’s entire existence to explaining how wonderful they (and their friends) are, and how terribly wrong everyone else is. The point of virtue signaling is to demonstrate superiority, for the purpose of consolidating power, prestige and financial reward. The culture of social justice is set up to reward the loudest and best complainers and to punish anyone that stands against them.”

“Most of the federal government could be shut down.”

Drive the man away from any public event. Don’t let him talk. Set fires. Destroy property. 1st Amendment? Never heard of it.

If Milo had been allowed to speak last night, a few hundred people would have heard him. There would have been virtually no fallout. But because of the riots, the division between opposites is exacerbated.

And this is the op.

Incite enough antipathy so that no conversation across the gap is possible.

That’s what college is all about these days, isn’t it?

Trump Hints He May Withhold Federal Funds from U.C. Berkeley After Violent Protest

The author of three explosive collections, THE MATRIX REVEALED, EXIT FROM THE MATRIX, and POWER OUTSIDE THE MATRIX, Jon was a candidate for a US Congressional seat in the 29th District of California. He maintains a consulting practice for private clients, the purpose of which is the expansion of personal creative power. Nominated for a Pulitzer Prize, he has worked as an investigative reporter for 30 years, writing articles on politics, medicine, and health for CBS Healthwatch, LA Weekly, Spin Magazine, Stern, and other newspapers and magazines in the US and Europe. Jon has delivered lectures and seminars on global politics, health, logic, and creative power to audiences around the world. You can sign up for his free NoMoreFakeNews emails here or his free OutsideTheRealityMachine emails here. 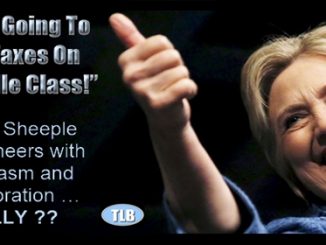 Another Hillary Freudian Slip? – “We Are Going To Raise Taxes On The Middle Class!”