US President Donald Trump has requested – and received – the resignation of Attorney General Jeff Sessions. The Department of Justice will be led by his chief of staff Matthew Whitaker until a permanent replacement is nominated.

“We thank Attorney General Jeff Sessions for his service, and wish him well!” Trump said on Twitter Wednesday afternoon, after announcing the appointment of Whitaker.

We are pleased to announce that Matthew G. Whitaker, Chief of Staff to Attorney General Jeff Sessions at the Department of Justice, will become our new Acting Attorney General of the United States. He will serve our Country well….

There is a potential problem with Whitaker’s appointment over the head of the current deputy AG Rod Rosenstein, who has been in charge of special counsel Robert Mueller’s investigation into allegations of Trump-Russia “collusion” during the 2016 presidential election. Rosenstein was confirmed to his post by the Senate, whereas Whitaker was not.

Also, Whitaker would be taking over from Rosenstein the oversight of the Mueller investigation.

“The Acting Attorney General is in charge of all matters under the purview of the Department of Justice,” DOJ spokeswoman Sarah Isgur Flores told reporters on Wednesday.

The sacking of Sessions and the appointment of Whitaker have alarmed Democrats, who are concerned that Trump is making moves to shut down the Mueller probe. Prior to becoming Sessions’ chief of staff in September 2017, Whitaker worked as a legal commentator for CNN, and at one point argued that Mueller’s investigation was becoming a “witch hunt.”

Clearly, the President has something to hide.

Given his previous comments advocating defunding and imposing limitations on the Mueller investigation, Mr. Whitaker should recuse himself from its oversight for the duration of his time as acting attorney general.

There have already been calls by Democrats in Congress for Whitaker to recuse himself from the Russia probe.

Anyone who attempts to interfere with or obstruct the Mueller inquiry must be held accountable. This is a red line. We are a nation of laws and norms not subject to the self interested actions of one man.

After opposing Sessions’ appointment as AG and criticizing him for enacting Trump’s policies at the DOJ for the past two years, many Democrats are now decrying his firing as obstruction of justice.

President Trump just removed Jeff Sessions. He wants an Attorney General to serve his interest, not the public.

Mueller’s investigation and the independence of the DOJ must be protected. Whitaker and any nominee must commit to doing both.

We will protect the rule of law.

Old and busted: “Jeff Sessions must resign as AG” because he can’t be trusted.
New hotness: Trump is corrupt for asking Sessions to resign.

Sessions, a senator from Alabama at the time, joined the Trump campaign early on and was considered a favorite to take over the Department of Justice in the new administration. He was immediately forced to recuse himself from any probes into “Russiagate,” due to his role in the campaign, however.

Since then, Trump has frequently clashed with Sessions over the DOJ’s handling of the Russia probe. The DOJ’s refusal to comply with congressional oversight requests to turn over documents related to the FBI’s spying on the Trump campaign also caused increasing frustration at the White House, prompting the president to declare at one point, “I have no attorney general!”

Sessions has maintained his loyalty to Trump and the president’s law and order agenda, even in the resignation letter. 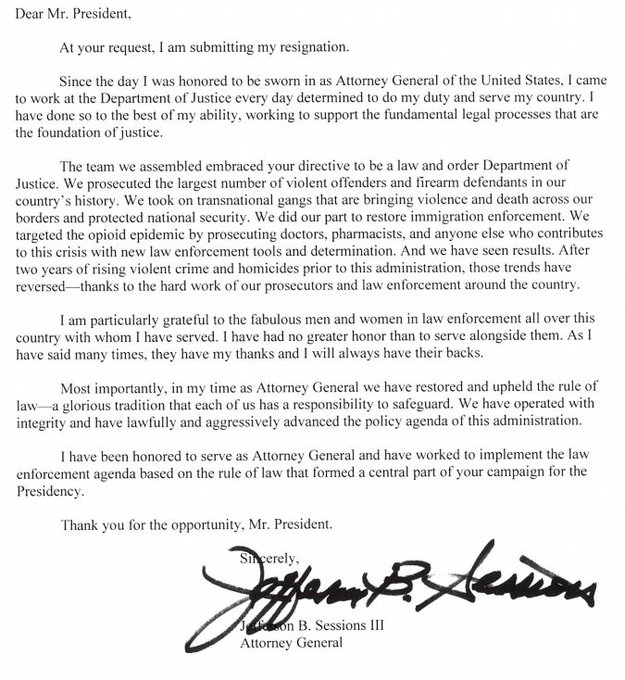 In his resignation letter, SESSIONS writes, “we have restored and upheld the rule of law — a glorious tradition that each of us has a responsibility to safeguard.”

With Republicans picking up seats in the Senate in Tuesday’s midterm elections, despite losing a majority in the House of Representatives, Trump was widely expected to reshuffle his Cabinet in the near future, though the speed with which Sessions was ushered out was unexpected in Washington.

(TLB) published this article from RT/USA with our thanks  for the coverage.

CoronaVirus: a propaganda master advises the President before he addresses the nation

This Thanksgiving, remember who grants the blessings we take for granted

‘The Saker’: The Systemic Collapse Of The US Society Has Begun