At a time of heightened tensions in the Middle East, U.S. forces have been deployed in Israel ahead of a large-scale joint Israel-U.S. military exercise set to start next week, the Times of Israel reports.

According to the Times, the drill will simulate a major conflict in which Israel is attacked with thousands of missiles. Known as the biennial Juniper Cobra military exercise and in its ninth installment, the simulation is clearly aimed at confronting Hezbollah’s alleged arsenal of between 100,000 and 150,000 missiles.

Approximately 3,200 soldiers from the Israeli Defense Force (IDF) and the U.S. European Command (EUCOM) took part in the February 2016 drill of the same name.

Despite the fact that the Israeli air force routinely strikes Hezbollah targets in Syria, it seems likely that these drills are intended to target Hezbollah in Lebanon, instead. On Wednesday, Israeli Defense Minister Avigdor Lieberman said that if war were to erupt again, Beirut would “pay the full price” for Iran’s presence in the country.

“Lebanon’s army and Hezbollah are the same — they will all pay the full price in the event of an escalation,” Lieberman also said. “If a conflict does break out in the north, ‘boots on the ground’ remains an option. We won’t allow scenes like in 2006, where we saw citizens of Beirut on the beach while Israelis in Tel Aviv sat in shelters… If people in Tel Aviv will be in bomb shelters, all of Beirut will be in bomb shelters.”

Though Israel rarely respects international law, the threat of violence towards a sovereign state in and of itself is a breach of the U.N. Charter.

“Israel’s northern front extends to Syria; it is not just Lebanon. I am not sure that the Syrian government can resist Hezbollah’s attempts to drag them into a war with Israel,” Lieberman added.

In September of last year, Israel held its largest military drill in 20 years, and it was specifically designed to simulate an invasion of Lebanon to target Hezbollah. Even the Israeli soldiers playing the role of the enemy were dressed in Hezbollah’s traditional attire and donned their yellow and green flag.

“What happened in 2006 will be a picnic compared to what we can do. I remember a Saudi minister saying they will send Hezbollah back to their caves in south Lebanon. I am telling you that we will return Lebanon to the Stone Age,” Katz said [emphasis added].

Unsurprisingly, Israel’s motives for launching wars of aggression are almost in complete tandem with that of the United States and have nothing to do with human rights, democracy, or protecting Israel from violent Islamist militants who seek to destroy its existence. Even Newsweek already intimated that the real driving force behind the impending spat is the control over natural resources in disputed territories.

“We reiterate our firm and unequivocal position in decisively confronting any aggression against our oil and gas rights, defending Lebanon’s assets and protecting its wealth,” Hezbollah told Newsweek in an email statement.

As it stands, it appears both sides are preparing for the worst-case scenario, and neither side looks to be exploring any form of meaningful diplomacy.

“We need to be aware of what the Israeli enemy is plotting against Lebanon, especially with the support of those who are working internally and externally to provide a climate of harmony with the Israeli threats to attack Lebanon,” Lebanon’s president, Michel Aoun, said last Thursday in a statement, according to Lebanon’s official National News Agency.

Aoun, a Christian, is a staunch backer of Hezbollah, which he views as a vital ally in countering the threat of an Israeli invasion. 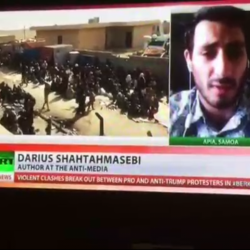 About the writer Darius Shahtahmasebi

Darius Shahtahmasebi has completed a Double Degree in Law and Japanese from the University of Otago, with an interest in human rights, international law and journalism. He’s a fully qualified lawyer in two separate jurisdictions, and writes about foreign policy for Anti-Media. Contact Darius: darius.shahtahmasebi@theantimedia.org. Support Darius’ work on Patreon: patreon.com/thetvsleaking

John Bolton: Draft-Dodger yet the Quintessential War-monger! How can this be? [Video]

Linderman Unleashed: Back for 2016 – With a BANG