Washington Reacts to the News of 304,000 Jobs Created

The recent partial government shutdown was expected to push down jobs gains before the report came out.

But the Bureau of Labor Statistics reported that the labor market overcame that issue by gaining 304,000 jobs in January. Lawmakers and experts generally expressed optimism with the report.

“While Democrats continue to debate how high they are willing to tax families, the GOP Tax Cuts keep paying real, measurable dividends for American workers and small businesses,” House Ways and Means Committee Chairman Kevin Brady (R-Texas) (shown left) said in a statement. “Wages and benefits for workers checked in at an 11-year high this week.”

The economy now has created 5.3 million jobs since the 2016 election.

“Today’s jobs numbers show a strong and growing U.S. economy,” Brady said on Friday. “It’s incredibly important that we work together to build on these important reforms so jobs and paychecks keep moving in this positive direction.”

The BLS jobs report did show that the unemployment rate edged up slightly to 4.0 percent. That could be because more people entered the labor market who were previously not counted, due to long-term joblessness. The jobs report also found that gains occurred mostly in the hospitality, construction, health care, transportation and warehousing industries.

“The January jobs report holds some encouraging news, but it belies the lasting financial damage that the Trump shutdown has inflicted on hundreds of thousands of Americans across the nation,” Speaker of the House Nancy Pelosi (D-Calif.) said in a statement on Friday. “Federal workers, many of them veterans, saw their financial security shaken, their credit ratings harmed, and their lives upended by the longest shutdown in history.”

The partial government shutdown was well into a record-long stretch when it finally ended on January 25. But the short-term spending bill that reopened the government lasts for only three weeks. A bipartisan group of lawmakers has already started meeting with the hope of reaching an agreement that will pass.

“Meanwhile, House Republicans overwhelmingly voted against a pay raise for federal civilian workers, refusing to respect the perseverance and patriotism of the men and women who were just furloughed or forced to work without pay,” Pelosi said. “This consistently callous GOP attitude disrespects workers, dishonors our values and damages our economy.”

The BLS found during its previous monthly employment report that the labor market increased by 312,000.

STRONG jobs report AGAIN. With 304K new jobs created in January, more than 5.3 million new jobs have been created since @POTUS Trump was elected. More evidence that our AMERICA FIRST agenda is WORKING! 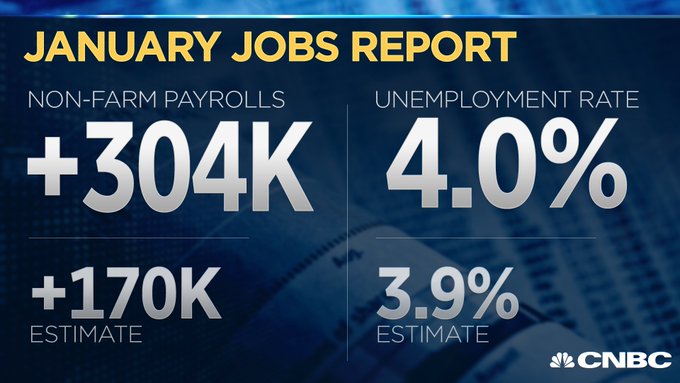 “[The jobs report] demonstrated the strength of the American economy, with 304,000 jobs added as private sector job creation continued to surge despite the partial government shutdown,” Secretary of Labor Alexander Acosta said in a tweet.

Trump came into office with a promise to fix the economy in a way that benefits domestic workers.

His agenda has included deregulatory efforts, tax cuts, and the renegotiation of international trade deals. The White House praised the report as an indication that the agenda is working.

Trump has overseen a steadily improving economy since entering office, though trends such as the employment rate and economic growth were already improving before he entered office. Nevertheless, those trends continued to improve — with the added bonus of a significant increase in economic confidence and a jump in capital investments.

“Yet another strong jobs report, adding over 300,000 jobs in January,” Heritage Foundation President Kay Coles James said in a tweet. “Despite the partial government shutdown, the private job market remains on a healthy footing because of pro-growth tax cuts and deregulation.”

Former President Barack Obama and his allies have claimed credit for the improving economy, since some of the trends started toward the latter part of his presidency. He started seeing more sustained improvements in his last couple of years after an unusually sluggish recovery that began with the Great Recession of 2007.

Wage growth has still remained a concern, with growth staying slow despite improvements over the last year. The average hourly earnings for all employees on private non-farm payrolls increased three cents, to $27.56 last month. That compared to an 85-cent increase at 3.2 percent over the year.

(TLB) published this article from LifeZette with our thanks for the coverage.

About the author Connor D. Wolf

Connor D. Wolf covers Congress and national politics and can be reached at connor.wolf@lifezette.com.

A tragedy for the nation – and democracy