So, it wasn’t that some black voters possibly genuinely disliked Clinton or disagreed with her policies.

It only took almost four years, but New York Times reporter Nicole Perlroth has finally gotten to the bottom of why black Americans didn’t get excited about Hillary Clinton’s 2016 candidacy for president: Russian trolls.
.

“We don’t talk about this enough, and it has been lost in the 2016 election hot takes,” Perlroth said Sunday on Twitter. “While 2016 saw record turnout, it also saw record decline in black voter turnout – the biggest decline in 20 years. Blacks were the number one demographic Russian trolls targeted on social media.”

White NYT reporter tells millions of black voters that they didn’t vote for Saint Hillary because Russia fooled them into staying home.

Note not just the racism here, but the projection: blaming Russia for suppressing the black vote is a straight-up disinformation campaign. https://t.co/qksODgt3fB 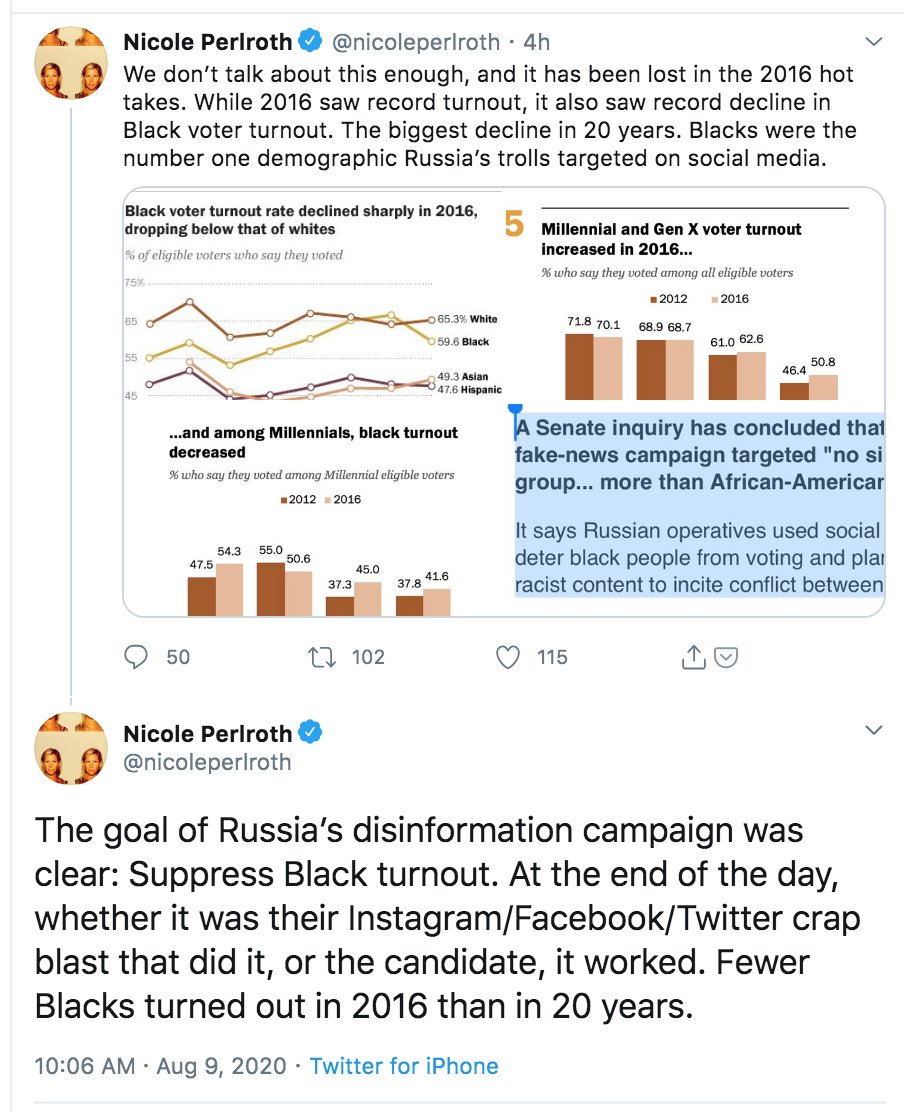 So, it wasn’t that some black voters possibly genuinely disliked Clinton or disagreed with her policies. There can only be one explanation for the decision of many to stay home, and it’s the same answer that Clinton herself and other Democrats often turn to when explaining undesirable outcomes that might otherwise be attributed to their own shortcomings: It’s Russia, obviously.

In a presidential election in which about $2.5 billion was spent, according to the Center for Responsive Politics, a “notorious Russian troll factory” budgeted a minuscule fraction of that, Perlroth believes, managed to sow enough “political discord” to drop black voter turnout from a record 66.6 percent in 2012 to 59.6 percent in 2016 – a huge needle mover for a group that typically votes overwhelmingly for Democrats.

It would also imply that only black voters were duped by the trolls. White and Asian voter turnout rates rose from 2012 levels, while Hispanic turnout was little changed, Pew Research Center data show.

Perlroth’s theory might seem to give black voters too little credit for their decision-making skills, but she actually sounds a bit like President Donald Trump’s 2020 Democrat opponent, Joe Biden, who casually suggested last week that blacks are a monolithic voting bloc.

“Unlike the African American community, with notable exceptions, the Latino community is an incredibly diverse community with incredibly diverse attitudes about different things,” Biden said, later apologizing and claiming that’s not what he meant to say. Yet back in a May interview with a black radio host, he notoriously said: “If you have a problem figuring out whether you’re for me or Trump, then you aint black.”

And yet the New York Times itself had a feature story in 2016 on legitimate reasons that some black voters in Wisconsin declined to vote for Clinton. Trump won the state by just 27,000 votes, and voter turnout was at a 16-year low. In just one black Milwaukee neighborhood, turnout dropped 20 percent from 2012’s level. Some of the black men interviewed by the Times cited past failures by Democrat politicians to improve their lives, while others express distrust for Clinton. Another cited 1994 criminal-justice legislation that was championed by Clinton and signed into law by her husband, President Bill Clinton, leading to unfair sentencing guidelines that put more blacks in prison.

To be sure, Hillary Clinton earned some distrust with black voters when she said of the 1994 bill that a crackdown on youth gangs was needed to deal with “superpredators” and “bring them to heel.” She also supported welfare reforms that, along with the crime bill, “decimated black America,” author and civil rights advocate Michelle Alexander wrote in 2016.

The notion that at least some black voters consciously declined to vote for Clinton because they didn’t like her is supported by the fact that Trump won 8 percent of the black vote, up from the 6 percent that Republican loser Mitt Romney garnered in 2012.

But Perlroth is buying none of that. “The goal of Russia’s disinformation campaign was clear: suppress black turnout,” she said. She suggested that Kanye West’s candidacy this year is a Republican effort with the same goal. “You know who this lesson was not lost on?” she said. “Republicans. See: Kanye.”

Twitter users responded by mocking the reporter, calling her a “shameless hack” and noting, “Amazing you think so low of blacks, similar to Biden.” One tweeted: “NYT employing reporters that are so out of touch that they are now becoming racist. Who would’ve thought?” Another said, “You’re a racist who’s displaying a perfect example of the flavor of gaslighting and blatant racism we see from liberals.”

Journalist Aaron Mate said: “White NYT reporter tells millions of black voters that they didn’t vote for Saint Hillary because Russia fooled them into staying home. Note not just the racism here, but the projection: blaming Russia for suppressing the black vote is a straight-up disinformation campaign.”

Is it in the bag, Joe? 5 times the Democrats blew a winnable election

(TLB) published this article from RT-USA News with our appreciation for this perspective in politics.

Is Eric Swalwell The Answer To Trump’s Prayers? [A Jonathan Turley commentary]

‘The Dumbest Generation’ Has Gotten Even Dumber 10 Years Later