Why is Speaker Pelosi running scared? Her 25th Amendment legislation tells it all.

Does House Speaker Nancy Pelosi have a crystal ball? What does she know that we don’t know.

Pelosi is just terrified. She’s running scared that President Donald Trump is going to win again. She realizes, like the others who’ve been attempting to oust Trump from office that they have little recourse against the American people who will vote for him. She is using the 25th Amendment. 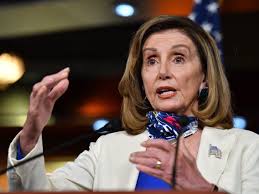 This isn’t the first time. Remember when former FBI General Counsel James Baker revealed to Congress during hearings that former Deputy Attorney General Rod Rosenstein, along with others, had discussed invoking the 25th Amendment to remove the President from office based on complete and utter lies.

Still, nobody has ever been held accountable for anything that has been done over the past five years to this administration, along with its presidential campaign in 2016.

So these swamp creatures are now emboldened. Where is Justice Department Attorney General William Barr? Where are the big indictments we were expecting with appointed Connecticut Attorney John Durham? Why are all the criminals who have committed the worst criminal acts against the Constitution, the American people and a sitting U.S. president still on the loose?

Pelosi told the world Friday that she plans to introduce legislation to create a “Commission on Presidential Capacity.” A commission on presidential capacity is another word for a set-up and a presidential soft coup that would occur right before our very eyes without any bloodshed.

Remember the 25th Amendment provides for procedures for transferring power to the vice president in case of the president’s death, incapacitation, removal or resignation. So why does Pelosi need legislation attempting to add more lies so she can twist the words of our Constitution to remove a U.S. president?

Pelosi is a liar who is already planning Coup 3.0. First was the Russia Hoax, second was impeachment and now a plan to remove President Trump from office should he be elected after Nov. 3.

There is no other way around it. Pelosi stated in an interview that President Trump may not be thinking clearly because of the drugs he is taking to treat COVID-19.

She said to Bloomberg TV, “the president is, shall we say, in an altered state right now. I don’t know how to answer for that behavior.”

“There are those who say when you are on steroids or have Covid-19, there may be some impairment of judgment,’ she added.

Trump, who is not having any reaction to his medication and has no symptoms of COVID-19, aid Pelosi “is the one who should be under observation.”

Crazy Nancy is the one who should be under observation. They don’t call her Crazy for nothing! https://t.co/7vE0Jvq0dM

The Democrats and the Right wing establishment don’t believe the American people have the capacity to choose their own leader. This is so anti-American it is terrifying.

They want to use the 25th, so they can transfer presidential powers to the Vice President for whatever reason Pelosi, Democrats and those so-called Republicans who line their pockets in Washington’s D.C. swamp at the expense of the American tax-payer.

The legislation would create the commission – get this – “to help ensure effective and uninterrupted leadership in the highest office in the Executive Branch of government.”

This is what Pelosi’s office said in a news release and my first question is don’t we have a Constitution that has already taken care of any of these questions. Yes, we do.

We are living in history. Don’t be blinded by the lies of the left and their disinformation campaign to seize your power and destroy the fabric of our young vulnerable nation.

Look beyond your feelings about President Trump, whatever they may be and take a hard look at the facts of what has happened over the past four years. We have seen the Russia hoax, the violations of our Constitution, the spying on American citizens and the secret attempts by senior officials in our government to seize power at the cost of what we, as Americans, have fought and sacrificed so much to protect.

Pelosi, along with the others who support this unAmerican actions, is scared for a reason. She knows the American people can win this election fairly. They are desperate to keep their bureaucratic oligarchy safe and their coffers filled.

They don’t want you to question the truth. They want to keep their crimes hidden. But that hasn’t happened under Trump. The masks have been removed from their faces and what we have witnessed it an affront to the American people and our government.

(TLB) published this article from Sarah Carter with our appreciation for this coverage and perspective.

Sara Carter is a national and international award-winning investigative reporter whose stories have ranged from national security, terrorism, immigration and front line coverage of the wars in Afghanistan and Iraq.

Sara is currently an investigative reporter and Fox News Contributor. Her stories can be found at saraacarter.com. She formerly worked as a senior national security correspondent for Circa News.

She was formerly with the Los Angeles News Group, The Washington Times, The Washington Examiner and wrote numerous exclusives for USA Today, US News World Report, and Arutz Sheva in Israel.  Continue Reading….

Your genome may have already been hacked

2 Comments on Why is Pelosi running scared?