THE IMPORTANCE OF ALTERNATIVE MEDIA

The superficiality of today’s television

Social critic Neil Postman contrasted the futures predicted in Nineteen Eighty Four and Brave New World in the foreword of his 1985 book “Amusing Ourselves to Death”. He wrote:

Niel Postman’s book, “Amusing Ourselves To Death; or Public Discourse in an Age of Show Business” (1985), had its origins at the Frankfurt Book Fair, where Postman was invited to join a panel discussing George Orwell’s “Nineteen Eighty-Four”. Postman said that our present situation was better predicted by Huxley’s “Brave New World”. Today, he maintained it is not fear that bars us from truth. Instead, truth is drowned in distractions and the pursuit of pleasure, by the public’s addiction to amusement.

Postman sees television as the modern equivalent of Huxley’s pleasure-inducing drug, soma, and he maintains that that television, as a medium, is intrinsically superficial and unable to discuss serious issues. Looking at television as it is today, one must agree with him.

The wealth and power of the establishment

The media are a battleground where reformers struggle for attention, but are defeated with great regularity by the wealth and power of the establishment. This is a tragedy because today there is an urgent need to make public opinion aware of the serious problems facing civilization, and the steps that are needed to solve these problems. The mass media could potentially be a great force for public education, but in general their role is not only unhelpful – it is often negative. War and conflict are blatantly advertised by television and newspapers.

There is a true story about the powerful newspaper owner William Randolph Hearst that illustrates the relationship between the mass media and the institution of war: When an explosion sank the American warship USS Maine in the harbor of Havana, Hearst anticipated (and desired) that the incident would lead to war between the United States and Spain. He therefore sent his best illustrator, Fredrick Remington, to Havana to produce drawings of the scene. After a few days in Havana, Remington cabled to Hearst, “All’s quiet here. There will be no war.” Hearst cabled back, “You supply the pictures. I’ll supply the war.” Hearst was true to his words. His newspapers inflamed American public opinion to such an extent that the Spanish-American War became inevitable. During the course of the war, Hearst sold many newspapers, and Remington many drawings. From this story one might almost conclude that newspapers thrive on war, while war thrives on newspapers.

Before the advent of widely-read newspapers, European wars tended to be fought by mercenary soldiers, recruited from the lowest ranks of society, and motivated by financial considerations. The emotions of the population were not aroused by such limited and decorous wars. However, the French Revolution and the power of newspapers changed this situation, and war became a total phenomenon that involved emotions. The media were able to mobilize on a huge scale the communal defense mechanism that Konrad Lorenz called “militant enthusiasm” – self-sacrifice for the defense of the tribe. It did not escape the notice of politicians that control of the media is the key to political power in the modern world. For example, Hitler was extremely conscious of the force of propaganda, and it became one of his favorite instruments for exerting power.

With the advent of radio and television, the influence of the mass media became still greater. Today, state-controlled or money-controlled newspapers, radio and television are widely used by the power elite to manipulate public opinion. This is true in most countries of the world, even in those that pride themselves on allowing freedom of speech. For example, during the US-led invasion of Iraq in 2003, the official version of events was broadcast by CNN, and criticism of the invasion was almost absent from their transmissions.

The mass media and our present crisis

Today we are faced with the task of creating a new global ethic in which loyalty to family, religion and nation will be supplemented by a higher loyalty to humanity as a whole. In case of conflicts, loyalty to humanity as a whole must take precedence. In addition, our present culture of violence must be replaced by a culture of peace. To achieve these essential goals, we urgently need the cooperation of the mass media.

The predicament of humanity today has been called “a race between education and catastrophe”: Human emotions have not changed much during the last 40,000 years. Human nature still contains an element of tribalism to which nationalistic politicians successfully appeal. The completely sovereign nation-state is still the basis of our global political system. The danger in this situation is due to the fact that modern science has given the human race incredibly destructive weapons. Because of these weapons, the tribal tendencies in human nature and the politically fragmented structure of our world have both become dangerous anachronisms.

After the tragedies of Hiroshima and Nagasaki, Albert Einstein said, “The unleashed power of the atom has changed everything except our way of thinking, and thus we drift towards unparalleled catastrophes.” We have to learn to think in a new way. Will we learn this in time to prevent disaster? When we consider the almost miraculous power of our modern electronic media, we can be optimistic. Cannot our marvelous global communication network be used to change anachronistic ways of thought and anachronistic social and political institutions in time, so that the system will not self-destruct as science and technology revolutionize our world? If they were properly used, our instantaneous global communications could give us hope.

The success of our species is built on cultural evolution, the central element of which is cooperation. Thus human nature has two sides, tribal emotions are present, but they are balanced by the human genius for cooperation. The case of Scandinavia – once war-torn, now cooperative – shows that education is able to bring out either the kind and cooperative side of human nature, or the xenophobic and violent side. Which of these shall it be? It is up to our educational systems to decide, and the mass media are an extremely important part of education. Hence the great responsibility that is now in the hands of the media.

A consumer who subscribes to the “package” of broadcasts sold by a cable company can often search through all 100 or so channels without finding a single program that offers insight into the various problems that are facing the world today. What the viewer finds instead is a mixture of pro-establishment propaganda and entertainment. Meanwhile the neglected global problems are becoming progressively more severe. In general, the mass media behave as though their role is to prevent the peoples of the world from joining hands and working to change the world and to save it from thermonuclear and environmental catastrophes. The television viewer sits slumped in a chair, passive, isolated, disempowered and stupefied. The future of the world hangs in the balance, the fate of children and grandchildren hang in the balance, but the television viewer feels no impulse to work actively to change the world or to save it. The Roman emperors gave their people bread and circuses to numb them into political inactivity. The modern mass media seem to be playing a similar role.

Our duty to future generations

The future of human civilization is endangered both by the threat of thermonuclear war and by the threat of catastrophic climate change. It is not only humans that are threatened, but also the other organisms with which we share the gift of life. We must also consider the threat of a global famine of extremely large proportions, when the end of the fossil fuel era, combined with the effects of climate change, reduce our ability to support a growing global population.

We live at a critical moment of history. Our duty to future generations is clear: We must achieve a steady-state economic system. We must restore democracy in our own countries when it has been replaced by oligarchy. We must decrease economic inequality both between nations and within nations. We must break the power of corporate greed. We must leave fossil fuels in the ground. We must stabilize and ultimately reduce the global population. We must eliminate the institution of war; and we must develop new ethics to match our advanced technology, ethics in which narrow selfishness, short-sightedness and nationalism will be replaced by loyalty to humanity as a whole, combined with respect for nature.

Inaction is not an option. We have to act with courage and dedication, even if the odds are against success, because the stakes are so high.

The mass media could mobilize us to action, but they have failed in their duty.

Our educational systems could also wake us up and make us act, but they too has failed us. The battle to save the earth from human greed and folly has to be fought in the alternative media.

The alternative media, and all who work with them deserve both our gratitude and our financial support. They alone, can correct the distorted and incomplete picture of the world that we obtain from the mass media. They alone can show us the path to a future in which our children, grandchildren, and all future generations can survive. 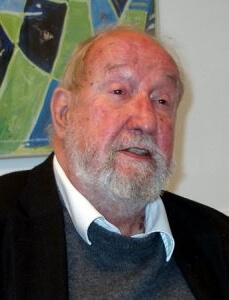 About the Author: John Scales Avery is a theoretical chemist at the University of Copenhagen. He is noted for his books and research publications in quantum chemistry, thermodynamics, evolution, and history of science. His 2003 book Information Theory and Evolution set forth the view that the phenomenon of life, including its origin, evolution, as well as human cultural evolution, has its background situated in the fields of thermodynamics, statistical mechanics, and information theory. Since 1990 he has been the Chairman of the Danish National Group of Pugwash Conferences on Science and World Affairs. Between 2004 and 2015 he also served as Chairman of the Danish Peace Academy. He founded the Journal of Bioenergetics and Biomembranes, and was for many years its Managing Editor. He also served as Technical Advisor to the World Health Organization, Regional Office for Europe (1988-1997). Continue reading HERE.

The Military Industrial Complex Cranking Up for World War