If somehow you think that tearing up (downtown) is going to help black people, you are sadly mistaken. ~Ron Herndon, Portland, OR.

Following what was either the third or the sixth night (depending on who you read) of chaos to sweep across America following the death of George Floyd a week ago, Americans surveying the wreckage are being met by staggering totals. After tens of thousands of peaceful demonstrators, violent anarchists and opportunistic looters commingled for another night of chaos in cities from California to New York, and from Seattle to South Florida.

Reports published late Sunday/early Monday revealed that President Trump spent part of Friday in an underground bunker under the White House as secret service fired rubber bullets into crowds of violent and non- violent demonstrators. Over the entire three nights of chaos, at least 4,400 people have been arrested, according to a tally compiled by The Associated Press. Arrests ranged from stealing and blocking highways to breaking the dozens of curfews imposed by cities around the country on Saturday and Sunday as the violence spread, the AP reports.

Curfews were imposed in more than 30 major cities around the U.S., including Atlanta, Chicago, Denver, Los Angeles, San Francisco and Seattle. About 5,000 National Guard soldiers and airmen were activated in 15 states and Washington, D.C.

In Indianapolis, two people were reported dead in bursts of downtown violence this weekend, adding to deaths reported in Detroit and Minneapolis in recent days. In Oakland, two federal agents were shot Friday night; one was killed.

One man was shot and killed when police and the National Guard opened fire on a crowd that had reportedly turned violent in Louisville, the city where Breonna Taylor was killed. WaPo reports Metro Police Chief Steve Conrad confirming the Kentucky National Guard and Louisville police were dispatched to the parking lot at Dino’s Food Mart around 12:15 a.m., where a large crowd had gathered, and that as they tried to disperse the crowd, somebody opened fire at an officer.

Minneapolis and St. Paul were largely spared on Sunday evening following early marches that were largely peaceful. Though there was one high profile incident involving a tanker driving into a crowd of marchers on a highway (the driver of the truck was later arrested), the widespread violence that plagued other areas didn’t materialize. As WaPo reports, the city on Monday morning looked like a “ghost town”.

But this relative peace came at a high cost, as the national guard moved to forcefully enforce curfews, even going so far as to fire paint cannisters and rubber bullets at people sitting on porches who ignored shouts to “get inside.”

The gas stations are closed. The grocery stores are dark. And along Hiawatha Avenue in South Minneapolis, one of the only restaurants serving is a McDonald’s, where every inch of the building’s windows are boarded up except for two small holes at the drive-through just big enough to pass along food.

After nearly a week of unrest in response to the death of George Floyd, city and state officials were optimistic Sunday after a night passed without the dangerous fires, looting and violence that have cut a wide swath of devastation through the heart of this Midwestern city.

But it came with a new reality: Thousands of National Guard troops and state and city police officers moving to aggressively – and sometimes violently – regain control of the streets, and a lockdown that has residents under curfew and has closed the major highways at night.

In some neighborhoods, residents stand outside their homes and businesses with guns, fueling a sense of lawlessness, while medical students descend on the scene with supplies to assist those in need, adding to what increasingly feels like a domestic war zone.

Minnesota’s Democratic governor, who has been criticized for not responding forcefully enough in the beginning. Now, he says, his approach might be remembered as heavy-handed – but he doesn’t care.

“There will be critiques of me that this is excessive. Why are you keeping forces on the ground?” Minnesota Gov. Tim Walz (D) said Sunday. It would be “irresponsible” to dial back the state’s response, amid rumors of outside agitators that he and other officials say have come into the city to sow chaos, he said. 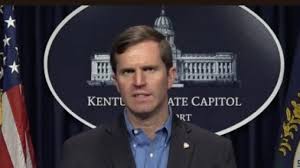 On Monday, Gov. Andy Beshear  (Pictured here) said in a statement that he had authorized the Kentucky State Police to independently investigate the fatal shooting in Louisville “given the seriousness of the situation.”

But the man in Louisville wasn’t the only casualty of the unrest. As governors in 26 states called in the National Guard and Secret Service agents again clashed with demonstrators outside the White House, media reported that at least six people had been killed in violence across the US, as gunfire rang out from Detroit to Indianapolis to Chicago to Omaha, notably correlating with the sites of notorious police killings.

While journalists, pundits, celebrities etc joined together to discuss the importance of ensuring that black voices are heard, it appears that many of the “antifascist” protesters were too busy fighting racism by lighting black communities on fire to listen to a handful of community leaders in Portland, Oregon last night.

Ron Herndon, the longtime director of the Portland-based Albina Head Start, held a peaceful event Sunday night at his organizations, a staple of black life in the city for years, according to the Oregonian.

“It appears most of the young folks tearing up the city are younger white people,” he said. “If somehow you think that tearing up (downtown) is going to help black people, you are sadly mistaken. Please don’t think you are doing any of us any favors by tearing stuff up.”

The “nonpartisan, politically neutral” mainstream press has decided to unilaterally give those looting and provoking violence and destruction a pass. Just because they’re telling you that is the “morally correct” position, doesn’t mean they’re right.

As officials in California deal with the aftermath on Monday, California state government buildings “in downtown city areas” will be closed Monday, officials said, as authorities worry about the prospect of more violence. And while a brief number of international protests were planned in solidarity, many, including a march in Sydney, Australia, have been canceled due to COVID-19-linked concerns.

Kavanaugh rounds 3rd base… Will he make Home? [Updated links, this article]