Mexico has approved asylum for former Bolivian President Evo Morales after the socialist leader was forced to resign from his post under pressure from military brass, amid opposition protests over a disputed election result which Morales has slammed as a coup.

The Mexican Foreign Ministry confirmed that asylum was granted to Morales on Monday, and insisted that the former leader is allowed safe passage out of Bolivia in the event he decides to leave the country.

“Latin America has witnessed unfortunate and violent events in which the constitutional order is broken and democratically elected authorities are forced to abandon everything to protect their life and security,” the ministry wrote in a communiqué, adding that Morales had “verbally and formally requested political asylum.”

“We will immediately proceed to inform Bolivia’s foreign ministry that under international law, it should offer safe conduct [to Morales],” FM Marcelo Ebrard told reporters.

Despite Morales’s departure from office and a new round of snap elections set in the coming weeks, chaotic protests continue across Bolivia.

His resignation came after senior army heads asked them to resign amid right-wing violence and coup attempt for weeks since the Oct. 20 elections.

Bolivian President Evo Morales was forced to resign Sunday after senior army and police chiefs called on him to do so following weeks of right-wing unrest and violence against his Oct. 20 elections victory in what his government has called a coup by opposition forces in the country.

“I decided to resign from my position so that Carlos Mesa and Luis Camacho stop abusing and harming thousands of brothers … I have the obligation to seek peace and it hurts a lot that we face Bolivians, for this reason, so I will send my letter of resignation to the Plurinational Assembly of Bolivia,” the former president of Bolivia said in a press release.

Bolivian Vice President Alvaro Garcia Linera also said that he was resigning from his position. The two leaders said that they would be handing their resignation letters to the country’s National Assembly.

Currently, the line of succession is broken in Bolivia.

Morales and Garcia Linera will stay in Chimore in the central Department of Cochabamba to work with the people.  “We will come back and we will be millions as Tupac Amaru II said,” Morales declared. 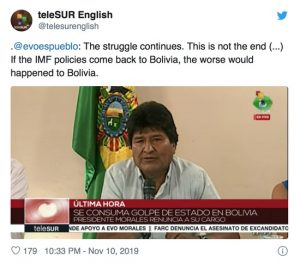 The resignation comes after Morales proposed a dialogue process with the opposition parties but was rejected, and even accepted the Organization of American States’ (OAS) call for new elections.

However, due to strong violent onslaughts against militants and leaders of the Movement To Socialism (MAS), intimidation of journalists, burning of residences and betrayal of political allies and members of the National Police, Morales and his Vice President decided to leave the government in order to prevent more violence.

In the interview with teleSUR’s correspondent in Bolivia Freddy Morales, the former president said the decision to call new elections was to preserve the peace in Bolivia “so that we do not confront the Bolivian family,” while calling on the opposition protesters to end the strikes and remove roadblocks in order to not harm the economy of the country.

‘Morales’ resignation undermines claims he is dictator, US may be behind push to oust him’

The US played a role in the resignation of Bolivian President Evo Morales, human rights and labor rights lawyer Dan Kovalik told RT. The US has been stirring unrest there for years with millions of dollars in “aid,” he said.

“I think this is a bad thing that’s happened and I see the hands of the US behind it,” Kovalik said, adding that there has been “evidence released of conversation between the White House and opposition leaders,” indicating that anti-Morales protests might have been a “coordinated” campaign.

A CIA offshoot of sorts, the NED channeled nearly $1 million into the South American country in democracy promoting aid in 2018 alone. A huge chunk of the funds was used by the International Republican Institute (IRI), which promotes a right-wing agenda.

Kovalik said that more proof of US involvement in the turmoil is bound to come out with time.

Morales’ decision to resign rather than cling to power while risking the lives of his supporters, who turn out for mass rallies in his name, “undermines the claims that he is some sort of a dictator,” Kovalik said.

“That shows a lot about who he is. That shows that Morales cares about his own country… he’s shown himself to have the well-being of his own people at heart.”

Noting that Morales, the first indigenous leader in the history of his country, has vastly improved living standards for people, including the indigenous population, Kovalik argued that his departure might spell trouble for the South American country.

Kovalik believes that while right-wing parties might try to capitalize on Morales’s resignation, they lack grassroots support.

“I’m not sure they have much popular support, so we’ll have to see if Evo Morales’s party can go on and win without him.”

Thousands of people flooded the streets to protest what the opposition called a rigged election on October 20, in which Morales secured a 10-percent win, which allowed him to avoid a run-off. Morales, once a very popular leader, was faced with a wave of unrest and mutiny from the military. Kovalik believes that outside interference might have played a role in this change of heart. 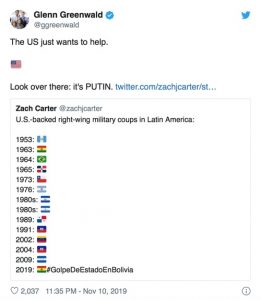 “Of course, people change their minds about things, but I also think there’s been some manipulation of the public in Bolivia.”

“Prisons are Big Business”: The Prison-Industrial Complex and the Global Economy

“The Islamic State” (ISIS) is Made in America: The Pentagon had Planned the Fall of Mosul and Ramadi in 2012