The US should cyber-attack Russia in retaliation for all its election meddling, John McCain has argued in a new book. The senator has an excellent track record when it comes to peddling pre-emptive strikes based on dubious claims.

McCain, a veteran US senator who represents Arizona and Raytheon, and usually never in that order, has penned a new treatise, ‘A Restless Wave,’ which is set for release on May 22. The Tomahawk missile-loving tome calls for a hardline approach to Russia, and for the United States to embrace its role as the world’s policeman.

In his book, McCain writes that he is eager “to make Putin deeply regret his assault on the foundation of our democracy,”while very considerately withholding citations or footnotes for his incendiary claim – because who has time for those?

“We have cyber capabilities too,” McCain boasts in his book. “They should be used to expose the epic scale of his regime’s corruption or to embarrass [Putin] in other ways.”

McCain, who is 81-years old and suffers from brain cancer, announced last month that he will not be seeking re-election once his current term is up, but will continue to weigh in on American politics from the sidelines (Twitter?).

“I’m freer than colleagues who will face the voters again. I can speak my mind without fearing the consequences much. And I can vote my conscience without worry,” he said, apparently unaware that he has been speaking freely about bombing the Middle East for the last 15 years, with zero consequences. He can speak his mind so openly about bombing faraway lands that he even sometimes sings about it.

(Amazingly, McCain’s Senate exodus will likely be mourned by liberals – for no other reason than his vitriolic opposition to Donald Trump.)

John McCain wanted to bomb Syria before other Western states started to hum to the same tune. And he’s always been the patron saint of the “moderate rebels.”

The senator repeatedly lobbied for “rebels” to be given military aid from the US, and called for cruise-missile strikes on the country’s legitimate government. 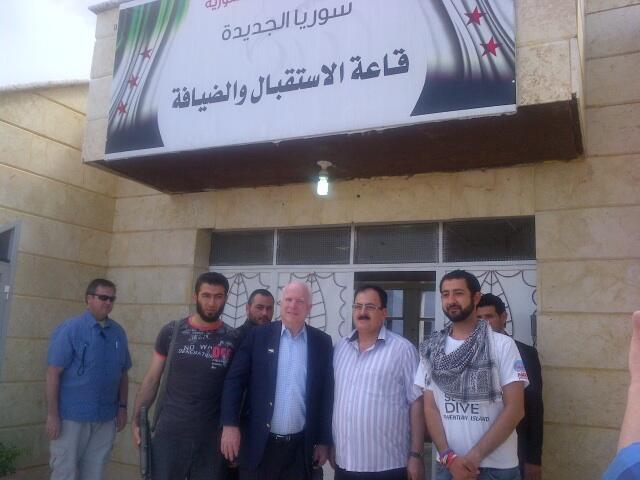 In Libya, he also praised the “heroic” actions of anti-government rebels, many of whom were in fact connected to Al-Qaeda. Like in Syria, McCain called for military aid for the rebels and cruise-missile strikes on government targets.

Syria is now in the seventh year of a bloody civil and foreign-proxy conflict, and Libya is a failed state and a center of the modern slave trade since its government was toppled.

Further back, McCain lobbied for and supported the US’ wars in Afghanistan and Iraq, which directly cost America an estimated $1.7 billion as of 2016, and cost thousands of civilian lives

With a record like McCain’s, it’s hardly surprising that his book calls for dangerous escalation with a nuclear power. Can’t wait for the Atlantic Council’s review!

(TLB) published this article from where it first appeared at RT/News.

More about John McCain from The Liberty Beason:

Trump slams Fauci’s claim about following the science on CV

Caitlin Johnstone: Liberals are CRAZY IDIOTS – they pretend to be for truth & morals