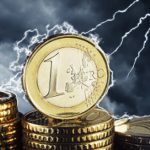 Within the last 2.5 years, the ECB bought bonds for the incredible sum of 2.5 billion euros, including government bonds of the excessively indebted PIGS countries (Portugal, Italy, Greece, Spain). The Italian 10-year government bonds currently have a yield of 2%, the Spanish 1.5%. If the ECB hadn’t bought these bonds en masse, the yields would have had to be much higher and the countries would be insolvent. The ECB is therefore demotivating the countries of southern Europe when it comes to saving; it is spoiling them with the printed euro and does not compel them to reduce their debt.

Under Mario Draghi (pictured left), at peak times, the ECB printed 80 billion euros per month. At present, the sum 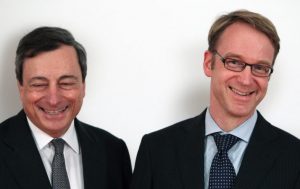 has been limited to 30 billion euros. However, Draghi’s term of office ends in autumn 2019 and his successor will most likely be Jens Weidmann (pictured), whose candidacy is supported by Merkel and Schäuble. The southern European countries are resisting this because Weidmann is known for his tougher course: if he is elected, he will probably switch off the printing press in Frankfurt am Main altogether.

The German savers will undoubtedly be protected from negative interest rates and, as a result, their savings will be saved. It would be an end of the EU planned economy reminiscent of the Soviet planned economy, where poorer republics were able to survive thanks to the printing of the common ruble, but at the expense of the Soviet Union’s growing indebtedness abroad and the impoverishment of society as a whole. But the question arises: who will buy the bonds of the actually bankrupt PIGS countries in the future? Is the Jens Weidmann candidacy not, for example, a preparation for the disintegration of the EU, which is now being passed off as a two-speed division in Europe?

The goal of Draghi’s ultra-expansive policy was the stability of the euro zone, revitalizing its meagre economy and return of moderate inflation, which is good for the economy. Unfortunately, the ECB’s objectives have not yet been achieved. The target inflation level of 2% is remote,1) as low interest rates only boosted lending for real estate and did not lead to more investment in the economy. The policy of the ECB is therefore as asymmetrical as its seat in Frankfurt: it favours the southern European governments and disadvantages the future prosperity of the “Northern Europeans”. The deficits of the debt states are being saved, the holes in the banks’ balance sheets are being plugged, but many companies are being paralyzed by the fact that their financing costs are at zero or even sub zero and they do not have to make any effort to produce good and innovative products in order to survive. Since 2009, the real economy in Germany has only grown by 14 percent since the last crisis, while the DAX has risen by 220 percent.

The asymmetry of the ECB’s policy also affects the financial markets. Draghi fueled the formation of blisters and does not want to learn from the recent history of Asia. In the mid-1980s, the Japanese central bank began to lower interest rates as it found the yen totally overvalued. The result was the Keiki bubble,2) a bubble boom in the Japanese stock and real estate markets. At the end of the 1990s, interest rates were at zero, investment activity stagnated, foreign investment funds borrowed on favourable terms in Japan and invested in emerging markets such as Malaysia, South Korea and Indonesia. The stock market crash came in 1990, the Nikkei plummeted 40%. The horse has already bolted: the crisis spread to the new Asian tigers, where over-investing also took place. In 1997 share prices collapsed in Kuala Lumpur, Seoul and Jakarta, where growth was also financed on credit. However, the Central Bank of Japan remained unteachable like the ECB today: it repeatedly lowered the key interest rate in order to prevent further crises. Since 2016 there has even been a negative interest rate, but the real economy is barely growing.

Draghi’s term will end in November 2019. Till then he will try to kick the can down the road and leave the day of reckoning to his predecessor. The Gefira team sees 2020 as a turning point in the modern economies. The moment Draghi stops being at the helm of the ECB, another euro crisis is sure to arise.

All political, moral & cultural ideas are just a matter of changing fashion

Five Years Ago: Regime Change at the IMF – Christine Lagarde and The Frame-Up of Dominique Strauss-Kahn