Countering Russia has become a lucrative industry in Washington. In recent years, the think tank business has exploded. But who funds these organizations, who works for them and what are the real agendas at play?

From the start, let’s be clear, the term ‘think tank’ essentially amounts to a more polite way of saying ‘lobby group.’ Bar a few exceptions, they exist to serve – and promote – the agendas of their funders.

However, particularly in the United States, the field has become increasingly shady and disingenuous, with lobbyists being given faux academic titles like ‘Senior Non-Resident Fellow’ and ‘Junior Adjunct Fellow’ and the like. And this smokescreen usually serves to cloud the real goals of these operations.

Think tanks actually originate from the Europe of the Dark Ages. That’s 9th-century France, to be precise. But the modern American movement is modeled on British organizations from around a millennium later, many of which, such as ‘RUSI (1831)’, still exist today. The concept was possibly brought to America by the Scottish-born Andrew Carnegie. And his ‘Carnegie Endowment for International Peace’ (1910) is still going strong.

Yet, the real boom in the ‘think tank’ industry came with the era of globalization. With a 200-percent rise in numbers since 1970. And in recent years, they’ve become more transnational, with foreign states and individuals sponsoring them in order to gain curry favor in Washington.

One country that largely hasn’t bothered playing this game is Russia. Instead, mostly in the foreign policy and defense sectors, Moscow frequently serves as Enemy Number One for many advocacy groups. Here are some prominent outfits in the think tank racket, which focus on hyping up threats from Russia.

What is it? Essentially the academic wing of NATO. The Atlantic Council serves to link people useful to the organization’s agenda across Europe and North America. However, in recent years, its recruitment has increasingly focused on employees who directly attack Russia, especially on social media. Presumably, this is to give them a guaranteed income so they can continue their activities, without needing to worry about paying the bills.

What does it do? Promotes the idea of Russia being an existential threat to Europe and the US, in order to justify NATO’s reason for being.

Who are its people? The Atlantic Council’s list of lobbyists (sorry, ‘Fellows’!) reads like a telephone directory of the Russia bashing world. For instance, Dmitri Alperovitch (of Crowdstrike, which conveniently alleges how Russia hacked the Democratic National Committee) is joined by the perennially- wrong Anders Aslund, who has predicted Russia’s impending collapse on a number of occasions and has, obviously, been off the mark. Then there’s Joe Biden’s “Russia hand,” Michael Carpenter and their recent co-authored ‘Foreign Affairs’ piece suggests he actually knows very little about the country. Meanwhile, Evelyn Farkas, a fanatical Russophobe who served in Barack Obama’s administration has also found a home here. Another interesting Atlantic Council lobbyist is Eliot Higgins, a “geolocation expert” who has made a career out of spinning tales from the Ukraine and Syrian wars but is, naturally, mostly disinterested in covering Iraq and Yemen, where the US and its allies are involved, but Russia has no particular stake. Lastly, we can’t forget CNN’s Michael Weiss, the self-declared “Russia analyst” who, by all accounts, has never been to Russia and can’t speak Russian.

Who pays for it? The Atlantic Council has quite an eclectic bunch of patrons to serve. NATO itself is a big backer, along with military contractors Saab, Lockheed Martin and the Raytheon Company, all of which naturally benefit from increased tensions with Moscow. The UK Foreign Office also splashes the cash and is joined by the Ukrainian World Congress and the US Department of State. Other sugar daddies include the US military (via separate contributions from the Air Force, Navy, Army and Marine Corps), Northrop Grumman and Boeing.

What is it? Despite the name, CEPA is based in Washington, not the ‘old continent’, but it does have an outpost in Warsaw. This club specifically focusses on Central and Eastern Europe and promoting the US Army and foreign policy establishment’s agenda there. Or, in its own words, creating a “Central and Eastern Europe with close and enduring ties to the United States.”

What does it do? CEPA amounts to a home for media figures who devote their careers to opposing Russia. It whips up tensions, even when they don’t really exist, presumably in order to drum up business for its sponsors, who are heavily drawn from the military industry. For example, it spent last year hyping up the ‘threat’ from Russia’s and Belarus’ joint ‘Zapad’ exercises, even running a sinister-looking countdown clock before the long-planned training commenced.

CEPA grossly overestimated the size of the event, saying it “could be the largest military exercise since the end of the Cold War” and dismissing basically all Moscow’s statements on its actual nature as “disinformation.”

Who are its people? Times of London columnist Edward Lucas has been part of CEPA for years.

✔@edwardlucas
Poland chooses Raytheon. Even if the missiles don’t work, America will defend its customers http://www.the-american-interest.com/2015/04/21/poland-picks-u-s-missile-shield/ …

Poland’s selection of the Patriot system for its AMD program will strengthen defense cooperation with the U.S. It’s also a sign that Warsaw takes its collective defense duties seriously.

The dedicated ‘Cold Warrior’ doesn’t appear to have spent much time in Russia for a long while and still seems to view the country through a prism which is very much rooted in the past. Thus, he’s more-or-less an out-of-touch dinosaur when it comes to Russia expertise. He will soon be joined by Brian Whitmore, who comes on board from RFE/RL and appears to be even more ill-informed than Lucas. His work for the US state-run broadcaster led to him being described as the “Lord Haw Haw of Prague,” where he has been based for some years. CEPA is a pretty fluid organization and, until recently, Anne Applebaum and Peter Pomerantsev were also on its list of lobbyists. The former is a Polish-American Washington Post columnist who obsessively denigrates Russia and the latter has previously worked with the Atlantic Council’s Michael Weiss, which shows you how small and incestuous the Russia-bashing world is.

Who pays for it? While other think tanks at least try to make their funding look semi-organic, CEPA looks to have zero hang-ups about its role as a mouthpiece for defence contractors. Which is, at least, honest. FireEye, Lockheed Martin, Raytheon, Bell Helicopters and BAE systems pump funds in and they are joined by the US State Department and the Department of Defence. Another notable paymaster is the National Endowment for Democracy – ‘regime change’ experts who are surely interested in CEPA’s remit to also cover Belarus. The US Mission to NATO and NATO’s own Public Diplomacy Division also provide cash.

What is it? Don’t be fooled by the name, the German Marshall Fund (GMF) is a very American body these days with little input from Berlin. It was founded by a donation from Willy Brandt’s Bonn-government to celebrate the 25th anniversary of the Marshall Plan. Ironically, Brandt is today best remembered as the father of ‘Ostpolitik’, which sought a rapprochement between Germany and Russia.

What does it do? After the fall of the Soviet Union, the GMF transformed into a vehicle promoting US influence in Eastern Europe, with outreaches in Warsaw, Belgrade and Bucharest. However, in the past 12 months, it’s taken a very strange turn. Following the election of US President Donald Trump (ironically a German-American), the lobby group launched the Alliance for Securing Democracy (ASD) project. Its centerpiece is the ‘Hamilton 68 Dashboard’, which seems to classify social media users which reject the US liberal elite’s consensus as “Russian trolls.” The reaction has been highly critical, with even the secretly-funded Russian opposition website Meduza asking “how do you identify ‘pro-Russian amplifiers’ if… themes dovetail with alternative American political views?”

Who are its people? The GMF, especially through its new ASD plaything, has a high-profile bunch of lobbyists. They include Toomas Ilves, an American-raised son of Estonian emigrants who once headed the Estonian desk at erstwhile CIA cut-out Radio Free Europe and eventually became president of Estonia. Also on board is Bill Kristol, known as the ‘architect of the Iraq War’ and former CIA Director Michael Morrell. Former US Ambassador to Russia Michael McFaul, who recently announced he was partially abandoning his Russian scholarship and has “lost interest in maintaining my (sic) ability to speak/write Russian” is another team member.

Michael McFaul
✔@McFaul
Im also done doing research about Russia for now. Russian politics is not so interesting these days. I have lots of other academic interests. (Ill remain engaged on the foreign policy side.) https://twitter.com/Bershidsky/status/954628323824558083 …

Michael McFaul
✔@McFaulAnd sorry that I am not responding in Russian. After being on the travel ban list to your country for 3 years, I have lost interest in maintaining my ability to speak/write Russian. You government seems to really fear me these days. странно и жалько https://twitter.com/McFaul/status/954611145570045952 …

After serving on Obama’s team, McFaul has re-invented himself as a network TV personality since 2016 with 280,000 Twitter followers, 106,000 of which are fake, according to Twitter audit.

Who pays for it? USAID are big backers, throwing in a seven-figure annual sum. This, of course, raises some questions about US taxpayers essentially funding the Hamilton 68 dashboard, which may be smearing Americans who don’t agree with their government’s policies as Russian agents. The State Department also ponies up capital, as does NATO and Latvia’s Defense Ministry. Other interesting paymasters are George Soros, Airbus and Google. While Boeing and the ubiquitous Raytheon are also involved.

What is it? This lobby group could as easily be titled ‘The Institute for the Promotion of War’. Unlike the others, it doesn’t consider Russia its primary target, instead preferring to push for more conflict in the Middle East. However, Moscow’s increased influence in that region has brought the Kremlin into its crosshairs.

What does it do? The IFTSOW agitates for more and more American aggression. It supported the Iraq ‘surge’ and has encouraged more involvement in Afghanistan. IFTSOW also focuses on Syria, Libya and Iran. Just last week, one of its lobbyists, Jennifer Cafarella,  called for the US military to take Damascus, which would bring Washington into direct conflict with Russia and Iran. 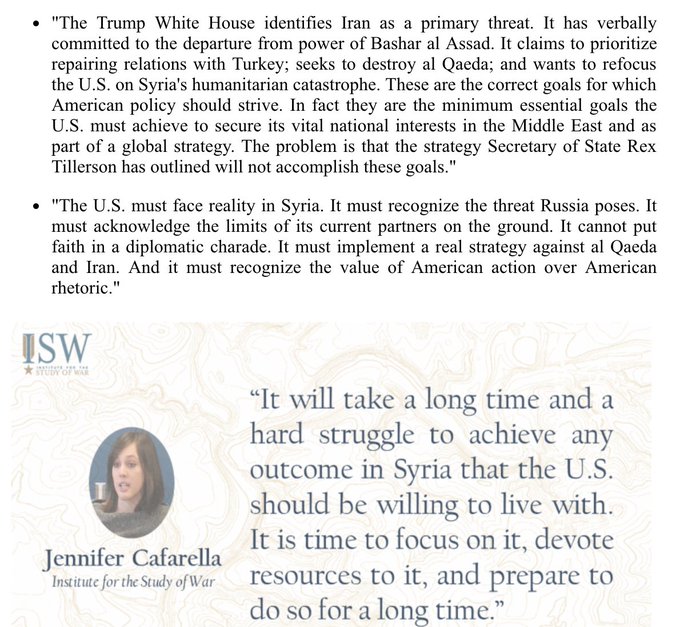 Joshua Landis
✔@joshua_landis
US occupation of Damascus – @TheStudyofWar seems to be calling for the US military to take Damascus and rebuild Syria. This seems the only “realistic” policy that could produce its demand to rid Syria of Assad’s government as well as Iranian and Russian influence.

Who are its people? Kimberly Kagan is the brains behind this operation. She’s married to Frederick Kagan, who was involved in the neocon ‘Project for the New American Century’ group along with his brother, Robert Kagan. Which makes Kimberly the sister-in-law of Victoria “f**k the EU” Nuland.

Another lobbyist is Ukrainian Natalia Bugayova, who was involved in Kiev’s 2014 EuroMaidan coup. She previously worked for the Kiev Post, a resolutely anti-Russian newspaper which promotes US interests in Ukraine. However, IFTSOW’s most notorious lobbyist was Elizabeth O’Bagy, who emerged as a ‘Syria expert’ in 2013 and called for American political leaders to send heavy weaponry to Syrian insurgent groups. She claimed to have a PhD from Georgetown University in Washington, DC, but this was fictional and once the media twigged to it, she was dismissed by the IFTSOW. Two weeks later, she was rewarded for her deception by falling up to a job with fanatical Russophobe Senator John McCain. O’Bagy has also collaborated with the Atlantic Council’s Michael Weiss, which is further evidence of how tight-knit the world of US neoconservative advocacy really is.

Who pays for it? Predictably, Raytheon has opened its wallet. Meanwhile, other US military contractors like General Dynamics and DynCorp are also involved. L3, which provides services to the US Department of Defense, Department of Homeland Security, and government intelligence agencies is another backer along with Vencore, CACI and Mantech.