As the mainstream media continues to obsess over $100,000 worth Facebook ads allegedly purchased by Russian spies in 2016 seeking to throw the presidential election, we’re almost certain they’ll ignore the much larger Russian bombshell dropped todayin the form of newly released FBI documents that reveal for the very first time that the Obama administration was well aware of illegal bribery, extortion and money laundering schemes being conducted by the Russians to get a foothold in the atomic energy business in the U.S. before approving a deal that handed them 20% of America’s uranium reserves…and resulted in a windfall of donations to the Clinton Foundation.

As we pointed out last summer when Peter Schweizer first released his feature documentary Clinton Cash, the Uranium One deal, as approved by the Obama Administration, netted the Clintons and their Clinton Foundation millions of dollars in donations and ‘speaking fees’ from Uranium One shareholders and other Russian entities.

Russian Purchase of US Uranium Assets in Return for $145mm in Contributions to the Clinton Foundation – Bill and Hillary Clinton assisted a Canadian financier, Frank Giustra, and his company, Uranium One, in the acquisition of uranium mining concessions in Kazakhstan and the United States.  Subsequently, the Russian government sought to purchase Uranium One but required approval from the Obama administration given the strategic importance of the uranium assets.  In the run-up to the approval of the deal by the State Department, nine shareholders of Uranium One just happened to make $145mm in donations to the Clinton Foundation.  Moreover, the New Yorker confirmed that Bill Clinton received $500,000 in speaking fees from a Russian investment bank, with ties to the Kremlin, around the same time.  Needless to say, the State Department approved the deal giving Russia ownership of 20% of U.S. uranium assets

Now, thanks to newly released affidavits from a case that landed one of the Russian co-conspirators, Vadim Mikerin, in jail, we learn that not only was the Obama administration aware the Russians’ illegal acts in the U.S. but it may have also been fully aware that“Russian nuclear officials had routed millions of dollars to the U.S. designed to benefit former President Bill Clinton’s charitable foundation during the time Secretary of State Hillary Clinton served on a government body that provided a favorable decision to Moscow.”  Per The Hill:

Before the Obama administration approved a controversial deal in 2010 giving Moscow control of a large swath of American uranium, the FBI had gathered substantial evidence that Russian nuclear industry officials were engaged in bribery, kickbacks, extortion and money laundering designed to grow Vladimir Putin’s atomic energy business inside the United States, according to government documents and interviews.

They also obtained an eyewitness account — backed by documents — indicating Russian nuclear officials had routed millions of dollars to the U.S. designed to benefit former President Bill Clinton’s charitable foundation during the time Secretary of State Hillary Clinton served on a government body that provided a favorable decision to Moscow, sources told The Hill.

Of course, when Schweizer’s book first made Uranium One a political hot topic in 2015, both the Obama administration and the Clintons defended their actions and insisted there was no evidence that any Russians or donors engaged in wrongdoing and there was no national security reason for anyone to oppose the deal.  That said, we now know that the FBI was aware of wrongdoing going back to at least April 2009 even though the deal wasn’t approved until October 2010.

But FBI, Energy Department and court documents reviewed by The Hill show the FBI in fact had gathered substantial evidence well before the committee’s decision that Vadim Mikerin — the main Russian overseeing Putin’s nuclear expansion inside the United States — was engaged in wrongdoing starting in 2009.

The first decision occurred in October 2010, when the State Department and government agencies on the Committee on Foreign Investment in the United States unanimously approved the partial sale of Canadian mining company Uranium One to the Russian nuclear giant Rosatom, giving Moscow control of more than 20 percent of America’s uranium supply.

In 2011, the administration gave approval for Rosatom’s Tenex subsidiary to sell commercial uranium to U.S. nuclear power plants in a partnership with the United States Enrichment Corp. Before then, Tenex had been limited to selling U.S. nuclear power plants reprocessed uranium recovered from dismantled Soviet nuclear weapons under the 1990s Megatons to Megawatts peace program.

And guess who ran the FBI’s investigation into this particular Russian plot?  As The Hill notes, the Mikerin probe began in 2009 under Robert Mueller, now the special counsel in charge of the Trump case, and ended in late 2015 under the controversial, former FBI Director James Comey who was relieved of his duties by President Trump.

Ironically, when the DOJ finally arrested Mikerin in 2014, following 5 years of investigations in a massive international bribery and money-laundering scheme, rather than publicly celebrate, they seemingly swept it under the rug.  In fact, there was no public release concerning the case at all until a full year later when the DOJ announced a plea deal with Mikerin right before labor day.

Bringing down a major Russian nuclear corruption scheme that had both compromised a sensitive uranium transportation asset inside the U.S. and facilitated international money laundering would seem a major feather in any law enforcement agency’s cap.

But the Justice Department and FBI took little credit in 2014 when Mikerin, the Russian financier and the trucking firm executives were arrested and charged.

The only public statement occurred an entire year later when the Justice Department put out a little-noticed press release in August 2015, just days before Labor Day. The release noted that the various defendants had reached plea deals.

By that time, the criminal cases against Mikerin had been narrowed to a single charge of money laundering for a scheme that officials admitted stretched from 2004 to 2014. And though agents had evidence of criminal wrongdoing they collected since at least 2009, federal prosecutors only cited in the plea agreement a handful of transactions that occurred in 2011 and 2012, well after the Committee on Foreign Investment in the United States’s approval.

The final court case also made no mention of any connection to the influence peddling conversations the FBI undercover informant witnessed about the Russian nuclear officials trying to ingratiate themselves with the Clintons even though agents had gathered documents showing the transmission of millions of dollars from Russia’s nuclear industry to an American entity that had provided assistance to Bill Clinton’s foundation,sources confirmed to The Hill.

Perhaps this is what the “most transparent” President in history meant when he told Medvedev that he would have “more flexibility”after his 2012 election.

TLB published this article by Tyler Durden from where it originally appeared at ZeroHedge. 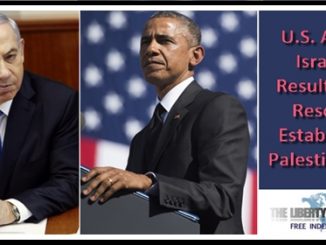 U.S. Anger At Israel May Result In UN Resolution Establishing A Palestinian State