Burisma official who signed 2014 deal was recently detained in alleged bribery plot in Ukraine and was publicly identified in 2014 British probe.

By Daniel Payne and John Solomon

Just a few months after Hunter Biden joined the board of Burisma Holdings, the Ukrainian gas company landed a deal with an Obama administration renewable energy program that had been championed by one of his father’s key vice presidential advisers, newly released State Department memos show.

The Memorandum of Understanding between Burisma and USAID’s Municipal Energy Reform Project in Ukraine (MERP) was signed in October 2014, according to a copy of the agreement obtained by Just the News under the Freedom of Information Act.

At that time, Burisma was under very public investigations by both the British government and the Ukrainian prosecutor general’s office and considered by the State Department to suffer from corruption issues.

And the Burisma official who signed the MOU, Andrii Kicha (Pictured below via Twitter screen shot), was publicly identified in British court documents in 2014 as someone whose conduct was questioned during the probe. More recently, Kicha was detained in Ukraine in what law enforcement authorities there said was a failed attempt to deliver a $6 million bribe to prosecutors designed to end continuing investigations of the controversial gas company.

Kicha has long denied wrongdoing, and Burisma has said it did not have any involvement in the bribery plot. The company has fought allegations of corruption for years and settled some of the Ukrainian cases against it at the end of the Obama administration by paying a fine.

Burisma officials did not respond to a request for comment about the 2014 MERP deal. State Department and USAID press officials also declined comment.

A senior State Department official, speaking only on condition of anonymity, said officials do not have much current documentation to show how Burisma landed the 2014 deal with USAID, the department’s foreign aid arm, but they believe it wasn’t fully vetted by the department. Instead, the official said, it appeared the MOU was approved by USAID’s contractor managing the program.

“This is clearly a matter of interest in their investigation, but right now it looks like Burisma signed the deal with our contractor, and our embassy didn’t even know much about it until 2016,” the official said, declining to provide more information.

Remarkably, the multimillion dollar MERP program’s involvement with Burisma escaped notice during last year’s impeachment proceedings, which focused heavily on the Bidens’ dealings in Ukraine and efforts by Rudy Giuliani, one of President Trump’s lawyers, to get the issues surrounding Burisma investigated by Ukrainian authorities. Specifically, Giuliani wanted Ukrainian prosecutors to investigate Joe Biden’s successful effort to get the Ukrainian prosecutor leading the Burisma investigation fired in 2016.

During those impeachment proceedings, Obama-era State Department officials testified they held strong corruption concerns about the Ukrainian gas company that had hired Hunter Biden in May 2014 and paid his firm more than $3 million in consulting fees. They added they believed Burisma’s arrangement with the vice president’s son created the “appearance of a conflict of interest” for Joe Biden as he oversaw U.S.-Ukraine policy for the Obama administration.

The new documents, which include a copy of the 2014 signed MOU and some 2016 email chatter among State officials about the MERP relationship with Burisma, were obtained under a FOIA lawsuit brought by Just the News and its public interest law firm, the Southeastern Legal Foundation.

The memos do not mention either Biden but do show that the U.S. embassy in Kiev did not want Burisma to participate in a MERP event honoring journalists in 2016, something Deputy Assistant Secretary George Kent mentioned briefly during his impeachment testimony.

The decision to cancel came after a Ukrainian raised concerns that Burisma, with its record of alleged corruption, was doing business with USAID’s program.

“Burisma has been notified that MERP will be conducting the award ceremony without their participation,” a U.S. embassy official wrote in an email that reached Kent and other top officials in September 2016.

While the documents don’t make mention of the Bidens, the MERP program itself and Burisma have a direct connection to Joe Biden’s inner circle. 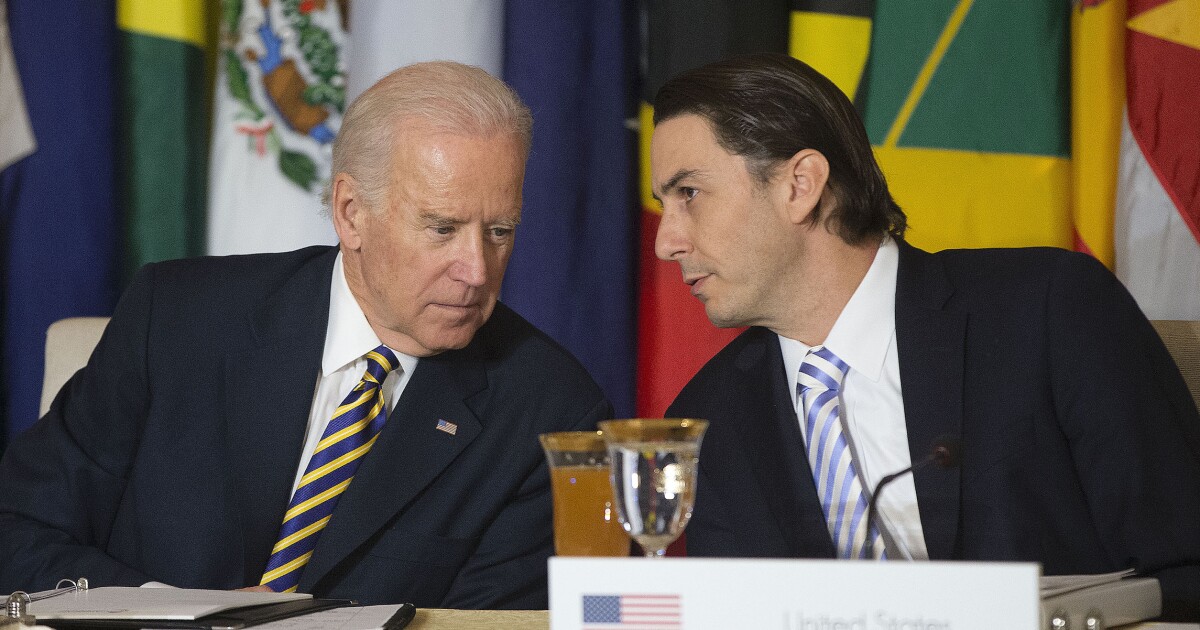 Joe Biden’s energy advisor, Amos Hochstein (Pictured  here with Biden), championed the MERP program in a Senate hearing in July 2014, about three months before Burisma landed the MOU with USAID. Hochstein testified that MERP was part of a multi-pronged U.S. effort by the Obama administration to make Ukraine more energy-independent from Russia by producing its own gas while also reducing greenhouse gas emissions.

“It is critical that Ukraine reduce the country’s energy intensity,” he told senators during the testimony. “Thankfully, the United States has a long history of support for energy efficiency in Ukraine. Most recently, USAID’s Municipal Energy Reform Project (MER Project) is designed to enhance Ukraine’s energy security as well as to reduce and mitigate GHG emissions resulting from the poor use of energy resources in Ukrainian municipalities.

A year later, Hochstein met with an American firm called Blue Star Strategies, which was hired by Burisma to try to change the gas firm’s image of corruption, according to a report in the Washington Examiner.

And the New Yorker magazine reported Hochstein had a direct conversation with Joe Biden about Hunter Biden’s role with Burisma, one of the few publicly known conversations the vice president had about his son’s employment with the controversial company.

The MOU stipulated that Burisma would work with the program to “enhance Ukraine’s energy security” through the “improvement of energy policies,” the “development of energy efficiency” and the “increase of investments in [the] energy sector.”

The $17 million program ended in March 2018. The contract history indicates that the program was administered by what was then the Research Triangle Institute, now RTI International. The specific agreement between Burisma and MERP dates to October 2014 and was set to expire a year later.

The agreement was “implemented by” International Resources Group, a contractor that facilitates government programs across the world, the MOU states. That group was subsequently acquired by RTI International in 2017. Neither RTI nor the contractor who signed the MOU returned calls seeking comment about the Burisma deal. The documents don’t indicate whether Burisma received any money under the program but federal procurement records do not list the Ukrainian gas firm as a recipient of U.S. aid.

The deal is notable for having occurred when Burisma was under two separate corruption investigations — one from the British government and one from Ukrainian authorities — over alleged illegal financial schemes carried out by the natural gas company.

Also notable is one of the memorandum’s signatories, Andrii Kicha, who signed on behalf of Burisma. In 2014-15, Kicha was named by British authorities in court filings targeting Burisma founder Mykola Zlochevsky against the Ukrainian government.

“Mr Andrii Kicha is a Ukrainian commercial lawyer, the chief legal officer of Burisma and other companies owned by the defendant. He was the sole authorised signatory on the BNP accounts that are the subject to the restraint order,” one British court filing stated.  You can read that document here.

Multiple criminal cases were opened between 2014 and 2016 in Ukraine against Burisma and Zlochevsky, some of which were settled and closed in 2016 with a fine, and some which persist today.

Kicha was freshly implicated in controversy connected to Burisma this month, when Ukrainian authorities detained him and several others in connection with a $6 million bribe meant for a prosecutor investigating Burisma.

The Ukrainian government is currently pursuing an embezzlement case against the company and Zlochevsky. A Kyiv court last Sunday revealed the seizure of the bribery funds.

Controversy has swirled around Burisma for several years since then-Vice President Joe Biden’s son Hunter took a seat on the gas company’s board of directors in May 2014. Joe Biden at the time played a significant role in foreign policy decisions regarding Ukraine, raising the specter of impropriety as his son joined a scandal-ridden firm at the same time the vice president had official dealings with the country.

It’s Time for Republicans to Take a Stand Against Pelosi’s Jan. 6th Circus