On the night before the Senate impeachment trial began, someone broke into veteran Washington investigative journalist John Solomon’s car parked near the White House and stole his laptop, according to a D.C. Metropolitan Police Department report obtained by RealClearInvestigations.

The computer contained notes on Ukraine and former Vice President Joe Biden and other sensitive information, Solomon, 52, said in an interview. He said he was preparing to launch a new podcast and news site at the time.

Though the laptop has since been recovered, the investigation is still open. “The case has been assigned a detective and is under investigation,” MPD spokesman Sean Hickman told RCI.

The Secret Service is also involved in the matter, which appears suspicious. Break-ins are rare in the high-security area where the crime occurred, just outside the White House perimeter, and a sophisticated device appears to have been used to get into the vehicle.

In the early evening of Jan. 20, the police report states, Solomon’s Apple MacBook laptop and computer bag, valued at around $1,800, were stolen from his 2019 Toyota SUV parked at 1776 F St. NW, across from the White House’s Eisenhower Executive Office Building. No windows were broken, and there were no other signs of forced entry. Authorities suspect the thief or thieves used an electronic jamming device to open the car door lock.

Solomon said that, other than the bag, nothing else was stolen from his car, including cash he used for the Metro.

The computer and bag, which also contained his U.S. Capitol press security badge, were discovered the next day nearly a block away from where his car had been parked. The contents of the bag had been dumped out on a picnic bench near the FDIC building. The location had no security cameras, so there is no known video surveillance footage that can be reviewed. Authorities described it as one of the few “dark spots” in the area.

Solomon, who noted an iPod was missing from his bag, says he is working with computer forensics experts to determine if any of his laptop information was exploited or if his hard drive was scanned within the period the laptop went missing.

“It’s a pretty professional job,” he said of the break-in, “but it’s probably just a coincidence.”

“It was probably just a street criminal searching for pass codes,” he added. “Or it could be someone searching for my Ukraine stuff, we don’t know at this point.”

An award-winning investigative reporter, Solomon has been a political target in recent months.

In December, House impeachment manager Adam Schiff released a report that published Solomon’s phone records. The Democratic leader cited Solomon no fewer than 35 times in his impeachment report. He added Solomon’s phone call history in a spreadsheet he compiled in the footnotes section of his report, which claimed Solomon reported “conspiracy theories” in The Hill newspaper to help President Trump “push false narratives” about Ukrainian interference in the 2016 election in favor of Hillary Clinton, as well as Biden’s attempts as Vice President that year to fire a Ukrainian prosecutor investigating a gas industry oligarch whose company paid his son millions of dollars.

Solomon, who previously worked for the Associated Press and Washington Post, suspects Schiff was singling him out as part of a political smear campaign.

“I’m the only [reporter] who ends up having his records released,” Solomon said in a recent interview with Fox Business News anchor Lou Dobbs. (Pictured)

Congress had been investigating Simpson, whose opposition research firm Fusion GPS was hired by the Clinton campaign to dig up dirt on Trump in 2016. Simpson hired former British intelligence officer and FBI informant Christopher Steele to compile the discredited Trump-Russia “dossier” the Obama administration used to spy on a Trump campaign adviser. Some of the spy warrants were declared invalid earlier this month because the government made “material misstatements” in obtaining them, according to a new court order. 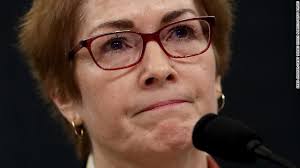 In early 2019, moreover, Solomon reportedly was put on a list of U.S. journalists whom then-U.S. Ambassador to Ukraine Marie Yovanovitch (Pictured here) sought to have “monitored.”

An Obama holdover, Yovanovitch was ousted as ambassador last May after Solomon reported that she tried to block investigations into Ukrainian meddling and corruption tied to the previous administration. She subsequently testified before Schiff’s impeachment committee. On Friday it was reported that she had retired from the State Department.

(TLB) published this article by Paul Sperry, Real Clear Investigations  with permission and our appreciation for the coverage.

This and all other original articles created by RealClearInvestigations may be republished for free with attribution. (These terms do not apply to outside articles linked on the site.)

We provide our stories for free but they are expensive to produce. Help us continue to publish distinctive journalism by making a contribution today to RealClearInvestigations.

Can’t have it both ways: Migrant advocate Cher blasted for opposing idea of illegals flooding LA