Kamala Harris, it’s not what you know but who you know

The well-rehearsed attack by Sen. Kamala Harris on Joe Biden that destroyed his candidacy during the clown-car Democratic presidential debates should have come as no surprise  to those who have watched her rise to political prominence. Never mind its relevance or accuracy — for Harris the ends have always justified the means.

We saw during the confirmation hearings for Supreme Court Justice Brett Kavanaugh that Kamala Harris is an ambitious politician with a chain-saw-prosecutorial style designed to bludgeon her targets with attacks and arguments that are more bluster than brilliant. She revealed herself to be a political opportunist who, as Sen. Cory Booker’s “Spartacus moment” fizzled, knows an “Elmer Gantry moment” when she sees one. As Jonathan S. Tobin noted in National Review:

She first earned notoriety in the Senate last year by demonstrating open incivility bordering on bullying when she interrogated Attorney General Jeff Sessions and the national-intelligence chiefs. Bullying witnesses and cutting them off before they have a chance to answer is her modus operandi during hearings…

The same qualities were on display during her questioning of Kavanaugh. But while, like the other Democrats, she never succeeding in outsmarting the judge, she was the only one to momentarily flummox him by bringing up the Mueller investigation.

She started with an impossibly general and specious query about whether he had ever discussed the Mueller probe with “anyone.”…by asserting, even by implication, that Kavanaugh might somehow be part of the Russia-collusion discussion, Harris gave liberal Democrats exactly the kind of red meat they crave.

Along with her snide and disrespectful prosecutorial tone, that made her the winner of the first day of the Kavanaugh primary.

But Harris did more than badger, mislead, and imply in her attempt to slander Kavanaugh. Harris circulated a deceptively edited video designed to further her narrative that, far from being an originalist that would apply the law fairly on any case, including those involving abortion, Kavanaugh was an active participant in the campaign to repeal Roe V. Wade. As Ashe Schow noted in the Daily Wire:

Harris’ Twitter account put out a clip that appeared to show Kavanaugh referring to birth control blanketly as “abortion-inducing drugs.”

This is clearly deceptive, as it’s obvious this was not the beginning of one of Kavanaugh’s answers. Kavanaugh’s full sentence, which would have only required one or two extra seconds had Harris’ team started at the beginning, made it clear he was summarizing what a party in a Supreme Court case said.

Kavanaugh said, “In that case, they said filling out the form would make them complicit in the provision of the abortion-inducing drugs that they were, as a religious matter, objected to.” (Emphasis added.)

Harris was willing to, uh, falsify evidence to slander Kavanaugh and push the false narrative that Kavanaugh was just another pro-lifer waging a war on women. As she tweeted:

Kavanaugh chooses his words very carefully, and this is a dog whistle for going after birth control. He was nominated for the purpose of taking away a woman’s constitutionally protected right to make her own health care decisions. Make no mistake – this is about punishing women.

Make no mistake — her abuse of Kavanaugh and Biden is about advancing the career of Kamala Harris. While portraying herself as a victim of segregation Biden supported, she neglected to point out her vehement opposition to school vouchers and school choice, things that would really free minorities from being trapped in failing schools and give a real and equal shot at getting a quality education. She’s all for busing children from and to the schools the government chooses, but not letting parents send their kids to the schools they choose. Harris in 2017 joined fellow Senate Democrats in a 24-hour floor session trying to sink the nomination of pro-school choice nomine Betsy DeVos to be Education Secretary.  As Joy Resmovits reported in the Los Angeles Times:

Harris’ remarks came amid a 24-hour marathon session that Democrats mounted to debate DeVos’ nomination on the Senate floor — a last-ditch effort to secure the one additional Republican vote needed to torpedo her confirmation.

DeVos, a Republican fundraiser from Michigan, former state party chair and school choice activist, has faced intense opposition since her confirmation hearing in January — the most of any of President Trump’s Cabinet picks. DeVos spent her career advancing school vouchers, which would allow students to use public dollars to attend private schools, both secular and religious.

It would seem it is Kamala Harris who continues to stand in the schoolhouse door. During a visit with DeVos to Saint Andrew Catholic School in Orlando Florida in 2017, President Trump rightly called education “the civil rights issue of our time”. As the New York Post reported:

Trump’s visit capped off a week in which he addressed the nation in a Joint Session of Congress, pledging to fix the education system in America, invoking civil rights and claiming it could be fixed using school choice — using public funds to enroll students in alternative charter schools and private schools as traditional public schools.

“We want millions more to have the same chance to achieve the great success that you’re achieving,” said Trump during his visit to St. Andrew Catholic School in Orlando, which receives a state funded benefit to operate as a religious school.

“St. Andrew’s Catholic School represents one of the many parochial schools dedicated to the education of some of our nation’s most disadvantaged children, but they’re becoming just the opposite very rapidly through education and with the help of the school choice programs,” Trump said in very brief remarks…

“As I’ve often said — in my address to Congress and just about anyplace else I can speak — education is the civil rights issue of our time. And it’s why I’ve asked Congress to support a school choice bill,’ he said.

Don’t ask Kamala Harris who, while thanking school busing for helping to launch her career, owes much more for her advancement for her association with former Democratic Speaker of the California Assembly Willie Brown. As the Washington Examiner noted:

Kamala Harris’ first significant political role was an appointment by her powerful then-boyfriend Willie Brown, three decades her senior, to a California medical board that has been criticized as a landing spot for patronage jobs and kickbacks. 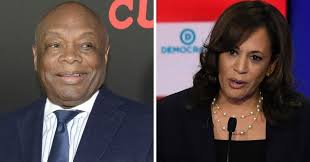 Then 30, Harris was dating 60-year-old Willie Brown, at the time the Democratic speaker of the California State Assembly, when he placed her on the California Medical Assistance Commission in 1994. The position paid over $70,000 per year, $120,700 in current money, and Harris served on the board until 1998.

The medical commission met twice a month, and Harris, a United States senator for California since 2017 and now a 2020 Democratic presidential candidate, missed about 20% of the meetings each year, according to commission records obtained by the Washington Examiner.

Harris, now 54, and Brown, now 85, started dating in the spring of 1994, showing up arm-in-arm at numerous high-profile functions, including Brown’s lavish parties and celebrity galas. He has been separated but not divorced from his wife Blanche Vitero since the 1980s and has maintained a string of girlfriends over the years.

Maybe, Kamala Harris, it’s not what you know but who you know.

(TLB) published this article from American Thinker with our appreciation for the availability.

Daniel John Sobieski is a freelance writer whose pieces have appeared in Investor’s Business Daily, Human Events, Reason Magazine and the Chicago Sun-Times among other publications.

Additional articles about Harris from The Liberty Beacon:

This is not the image of A President… Kamala Harris edition…

Is Big Pharma Into Fraudulent Ads Especially Regarding Vaccines?