Just days after the awful events of Pittsburgh, disgusting neo-Nazi graffiti was found Thursday inside a Brooklyn synagogue.

NYPD officials told Breaking911 that the suspect entered Brooklyn’s Union Temple around 8:30 p.m. Thursday night and used a black marker to deface three different locations with the messages, “die Jew rats we are here,” “Jews better be ready,” and “Hitler.”

As one would expect, New York’s officials were extremely quick to decry the disgusting actions, with NY Governor Cuomo releasing the following statement – with a clear intent to pin the blame on one side:

“I am disgusted by the discovery of anti-Semitic graffiti at a house of worship in Brooklyn. At a time when the nation is still reeling from the attack at the Tree of Life synagogue in Pittsburgh, New Yorkers stand united with the Jewish community and against hate in all its forms.

“In New York, we have zero tolerance for discrimination in our laws or in our spirit. I have directed the State’s Hate Crimes Task Force to investigate this hideous act and hold those responsible accountable to the full extent of the law.

“As Governor, I am also doing everything in my power to ensure our religious institutions are free from violence and intolerance. This week, we announced the launch of an additional $10 million grant program to help protect New York’s non-public schools and cultural centers, including religious-based institutions.

“The disgusting rhetoric and heinous violence in this nation has reached a fever pitch and is ripping at the fabric of America, and it must stop. In New York, we have forged community through chords of commonality and we will always stand together against hate and discrimination.”

“Coming at a time when Jewish New Yorkers are feeling a profound sense of loss and sadness because of what happened at the Pittsburgh Tree of Life synagogue and all those who were killed there because of their faith.”

But, in an interesting twist, according to Breaking911, surveillance footage released by authorities captured a photo of the suspect, “described as a male Black, approximately 20-years-old, 5’8″, 140 lbs, with black hair and last seen wearing a red suit jacket.”

And yesterday morning, the local CBS station confirms a man is in custody for the ‘hate crime’.

26-year-old James Polite, of Brooklyn, allegedly wrote the graffiti, according to police.

The suspect also drew a picture of the Puerto Rican flag and wrote “Free P.R.”

Additionally, sources tell CBS2, Polite could be behind a series of fires at other shuls and yeshivas in the area. He was charged with criminal mischief, hate crime, and making graffiti in connection to the messages scrawled at Union Temple.

So not quite the white-supremacist, Trump-supporting, racist, bigot everyone was expecting?

But, in an even more potentially shocking twist, it is possible that the alleged serial anti-semitic graffiti artist is a former Barack Obama volunteer and liberal media darling… 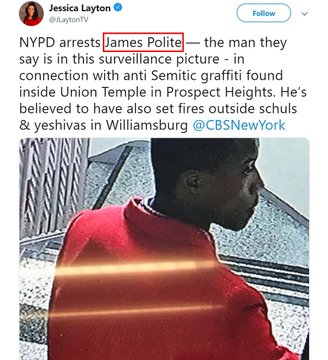 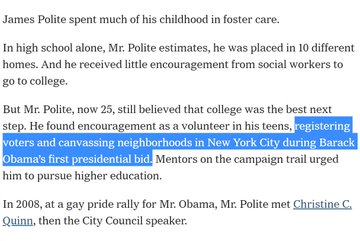 Is this the same guy that volunteered for you during your campaign? https://www.nytimes.com/2017/12/14/nyregion/after-years-in-foster-care-intern-adopted-by-city-hall-catches-a-break.html …

In  2017, The New York Times wrote a lavish lovefest of a story:

James Polite spent much of his childhood in foster care.

In high school alone, Mr. Polite estimates, he was placed in 10 different homes. And he received little encouragement from social workers to go to college.

But Mr. Polite, now 25, still believed that college was the best next step. He found encouragement as a volunteer in his teens, registering voters and canvassing neighborhoods in New York City during Barack Obama’s first presidential bid.

Manhattan Democrat Christine Quinn still remembers their introduction on the steps of City Hall. “James was telling me his story,” she recalled recently in an interview. “And I said, ‘Do you have an internship?’ And he said ‘No.’ And I said, ‘Well, you do now.’”

“James was the adopted child of the Quinn administration,” she said. “And it wasn’t just me. It was the entire City Council staff.”

Of course, there could be another 26-year-old (25 in 2017) black male, living in Manhattan with the same name as James Polite, but we suspect that is a little unlikely.

As The New York Times reports, towards the bottom of their puff-piece:

Despite the assistance, Mr. Polite struggled at Brandeis. Smoking marijuana, he said, became a coping mechanism to manage his stress. He had first tried the drug at a foster home in his early teens, but in college his habit grew to three times a day. He was placed on a health leave of absence in late 2015 and required to enter a rehabilitation program. During treatment, he learned he had bipolar disorder, for which he is now medicated.

More likely is the young man with a bright future, heralded by the liberal media and politicians as a success story waiting to happen, has seen his life take a much darker route.

(TLB) published this article, as compiled by Tyler Durden, from ZeroHedge. Our thanks to Tyler for the availability and coverage.

Jewish Nation-state Law: Why Israel Was Never a Democracy