Our initial reaction when we saw the headline in the Washington Post this morning about Amazon reconsidering its move to Queens was that all the real estate speculators who had scrambled to buy up nearby property (or shares in NYC-based REITs) would experience a dizzying surge of anxiety. And as it turns out, in offices across NYC, hundreds of real estate brokers were thinking the exact same thing.

Late on Friday, reporters for Bloomberg canvassed established brokers with most of the big houses across the city, and their responses ranged from shock, to amusement, indignation, and disbelief. 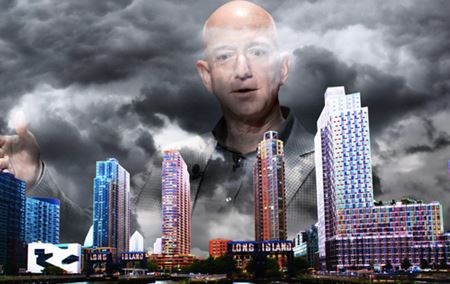 Bill Montana, a senior managing director at Savills, exclaimed that Amazon would be “exceedingly foolish” to scrap its plans to move to the Big Apple.

Bill Montana was schmoozing with real estate brokers Thursday at an industry event in New York, talking about the biggest deal in years: Amazon.com Inc.’s decision to build a major campus in Queens.

By the next morning the euphoria had evaporated. Reports the tech giant was reconsidering its plans amid a fierce public backlash sent a jolt through the real estate community that was pinning their hopes on a significant pickup in activity.

“You gotta be kidding me!” Montana, a senior managing director at brokerage Savills Studley, said when reached by phone Friday. “Amazon would be exceedingly foolish to actually pull out of this deal.”

Continuing with that theme, a broker at Colliers said scrapping the move to Queens would hurt Amazon as much as – if not more than – the city itself.

“It would be somewhere between a terrible shame and a devastating loss,” said Michael Cohen, tri-state region president at brokerage Colliers International Group Inc.

“It’s not the end of the world, but it’s a self-inflicted wound that will possibly send the signal to others that might have wanted to follow in Amazon’s footsteps.”

Savanna, the owner of Citigroup’s Long Island City office, affirmed that Amazon had signed a letter of intent to move about some employees into the Citigroup building at 1 Court Square. Citi is already preparing to move 1,100 employees out of the building. Both parties would undoubtedly be less-than-pleased if Amazon backed out of the agreement.

Brokers who have been in the process of negotiating sales are probably also pissed about possibly losing out on some fat commissions, as even the whiff of a possible Amazon pullout could send would-be buyers – some of whom were planning to pay premiums as high as 20% over recent prices – immediately fleeing.

“A lot of euphoric offers have come in for buyers that wanted to be in the area,” said Adelaide Polsinelli, a broker at New York City-based Compass. “People made serious bets on Amazon being there, and there’s not much of a local office market there right now.”

Polsinelli said she’s been contacted by about 20 new buyers showing interest in seeing properties in Long Island City. She said some owners raised prices as much as 20 percent after Amazon’s initial announcement, but expects values to be challenged if the company goes elsewhere.

Condominium sales in LIC would likely slow to the pre-Amazon pace.

Without a boost from Amazon, the number of condominium sales in Long Island City will probably slow, said Patrick W. Smith, a Stribling & Associates broker. Since Amazon announced its plans, homebuyers had signed 132 contracts in the neighborhood as of Feb. 3, his data show, up from 40 signed in the same period a year earlier.

“We have to expect that if Amazon did pull out of this deal altogether, that sales velocity might go back to the pre-Amazon number,” Smith predicted.

But not to worry; some of the savvier brokers are shrugging off the report for now, based on the belief that this is merely a bargaining tactic on behalf of Amazon to try and convince opponents in the New York State Legislature to fall in line.

For now, people are trying to assess whether it’s all just a bargaining tactic. Amazon has used the threat of slowing down its growth to win policy concessions in Seattle, where it’s headquartered and employs tens of thousands of workers.

In May, when the city council was planning a vote on a new tax on large employers to fund homeless services, Amazon said it was halting work on one office tower and considering subleasing another space it intended to occupy downtown. After the threat, local officials scaled back the tax before passing it. Amazon and other area businesses then mounted an effort to overturn the measure at the ballot box. The city council scrapped the tax about a month later.

“The report is probably just a trial balloon being floated to scare people in New York to fall into line,” said Tom Stringer, who works on corporate relocations as a managing director at BDO Consulting. But, he said, “I can tell you definitively that numerous state agencies are watching this closely and are in contact with Amazon and are looking for a chance to poach it.”

For their sake, one hopes that Andrew Cuomo got the message.

(TLB) published this article from ZeroHedge as written and compiled by Tyler Durden.