Death rained down from the sky – More to Consider

SiriusXM, The Joe Madison Show, Obama [1] [2]: “I promise you that when it’s [the vaccine] been made for people who are less at risk, I will be taking it, and I may end up taking it on TV or having it filmed just so that people know that I trust this science…People like Anthony Fauci, who I know, and I’ve worked with, I trust completely…So if Anthony Fauci tells me this vaccine is safe, and can vaccinate, you know, immunize you from getting COVID, absolutely, I’m going to take it…I understand, historically, everything dating back all the way to the Tuskegee experiments and so forth, why the African-American community would have some skepticism, but the fact of the matter is, is that vaccines are why we don’t have polio anymore.”

There’s no risk here, because if doctors have any sense, they’ll make sure Obama is jabbed with a shot of saltwater, a placebo, masquerading as the real thing.

The real thing, the RNA COVID vaccine, poses all sorts of dangers. No RNA technology for a drug or vaccine has ever been approved for public use. [3]

Efforts in the past to bring the technology to market have failed, owing to adverse effects. The basic effect has been auto-immune reactions. The body attacks itself. [3]

A mild case cures itself naturally. No need for a vaccine.

Other than danger, and uselessness, the vaccine is perfect.

Obama is grandstanding. He’s looking for publicity any way he can get it, as he re-enters the political scene standing right behind his former assistant, Joe Biden.

Maybe Joe can appoint Obama to the post of press secretary, to stand up on television once a week to deliver messages to the nation. Just like old times.

Unless the building tsunami of vote fraud sweeps Joe away into obscurity.

Now that he’s back on the scene, Obama might feel a need to re-enforce his image as the “great peacemaker.” You know, “bridging the divide in a nation seized by a frenzy of hatreds.”

Sub-headline: “According to new figures, the US dropped nearly three bombs every hour, 24 hours a day.”

“…in 2016 alone, the Obama administration dropped at least 26,171 bombs. This means that every day last year, the US military blasted combatants or civilians overseas with 72 bombs; that’s three bombs every hour, 24 hours a day.”

“While most of these air attacks were in Syria and Iraq, US bombs also rained down on people in Afghanistan, Libya, Yemen, Somalia and Pakistan. That’s seven majority-Muslim countries.”

“One bombing technique that President Obama championed is drone strikes. As drone-warrior-in-chief, he spread the use of drones outside the declared battlefields of Afghanistan and Iraq, mainly to Pakistan and Yemen. Obama authorized over 10 times more drone strikes than George W Bush, and automatically painted all males of military age in these regions as combatants, making them fair game for remote controlled killing.”

“President Obama has claimed that his overseas military adventures are legal under the 2001 and 2003 authorizations for the use of military force passed by Congress to go after al-Qaida. But today’s wars have little or nothing to do with those who attacked the United States on September 11, 2001.” 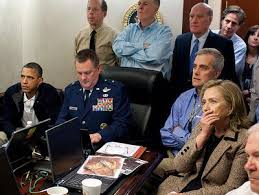 Then there was Obama’s military adventure, in partnership with Hillary Clinton: the bombing of Libya, which turned that place into a non-nation terrorist nightmare.

So, would you buy a used car from that man, or trust his assurances about a COVID vaccine?

Update: Now we have rogue’s gallery of ex-presidents who say they’ll take the COVID shot publicly, to assure everyone it’s safe: Obama, Bush, and Bill Clinton. [6]

Hell of a trio. Will Trump and Biden join the team? [7] 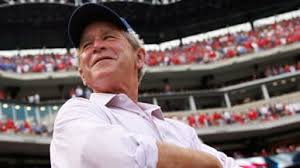 Bush is the perfect dupe. You see, he’s done this before. Years ago, when it was falsely announced that the country was under threat from a bio-attack of smallpox, Bush rolled up his sleeve on live television and took the vaccine.

Tommy Thompson, then the head of Health and Human Services, announced there was a vial of smallpox vaccine ready for every American, and special centers would be set up across the nation to deliver it.

Only a few centers were established. Months passed. Then, all sorts of doctors objected, saying the live vaccine was too dangerous for mass public consumption.

Tommy Thompson blithely made a new announcement. He was NOT recommending that any of Bush’s cabinet members take the shot.

Of course, the vaccine, which was too dangerous, was the same brew that had been given to millions upon millions of people in Africa, decades earlier.

Upon completion of the program, the World Health Organization (WHO) issued heraldic proclamations of success. Smallpox had been conquered.

A very trustworthy source told me the following: After the smallpox vaccine campaign in Africa was over, a secret WHO meeting was held in Geneva.

A decision was made never to deploy that vaccine again.

Why? Because it caused smallpox.

But don’t worry. All is well. Take the COVID vaccine. Carry the immunity certificate with you wherever you go. Flash it, smile, be happy.

Obama likes the vaccine. Bush does. Clinton does. Trump and Biden, too.

What else do you need to know?

If Everything Is Going To Be Just Fine, Why Do The Shortages Just Keep Getting Worse?

Impeachment Trial Extended Until Wednesday… No New Witnesses, Trump will be acquitted

Trump Slams Sessions: “He Is Scared Stiff And Missing In Action”

4 Comments on Obama says he would take the COVID Vaccine Shot on live Television, IF…