Rep. Iihan Omar has been much in the news for her extreme positions on defunding police departments and yesterday calling for the dismantling of not just the American economy but the political system.  In declaring her support for sweeping legislation yesterday, Omar railed against the American economic and political systems as a “system of oppression” and insisted that we cannot allow people to “prioritize profit without considering who is profiting.” That question however is now being raised in growing ethical concerns over Omar giving her husband’s company a massive amount of her campaign funds.  This has been an issue that I have written about for over two decades as a legal but corrupt practice. The two stories show once again that the only defining element in Washington greater than irony is hypocrisy in both of our political parties.

The ethical charges are being voiced by figures like George Bush’s ethic adviser Richard Painter who has been one of the most vocal critics of President Donald Trump. Indeed, Painter previously criticized Omar after she declared that she believes former Vice President Joe Biden is a rapist who is continuing to lie about raping a Senate staffer. However, she is still supporting and advising Biden in his presidential election.  Painter objected that Omar would publicly admit that she believed Biden raped his staffer because it could undermine his election.

Painter is now focused on what is clearly a legitimate ethical concern. He is quoted as saying payments like those of Omar “should not be allowed . . . given the amount of money that goes into these campaigns from special interests.”

Omar has previously been criticized for paying fees to Tim Mynett’s consulting firm when they were rumored to be in a romantic relationship. Mynett (Pictured Left) and Omar would later divorce their respective spouses and marry.  Omar has given Mynett a total of more than $878,000 since 2018. That includes $189,000 just weeks after the couple announced they were married, according to media reports citing data from the Federal Election Commission (FEC).

What should upset voters the most is that (so long as the payment reflect a very generous standard of market rates) this is all perfect legal under the laws designed by politicians for themselves. 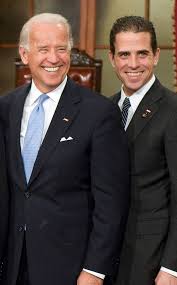 For decades I have railed against laws designed carefully to give the appearance of ethics while intentionally creating loopholes for politicians to enrich their families.  The recent controversy over Hunter Biden is another example of one of those avenues for corruption in the form of influence peddling (contracts that both leading Democrats and the media have bizarrely defended).  It is also lawful but an obvious corrupt practice. When faced with corrupt but legal practices by members of their own party, many continue to espouse the “if it is legal it is alright” claim.  It is not all right.  It exists because these politicians can count on their parties to deflect criticism or insist that there is nothing to see here. The anti-nepotism statute is an example of this fraud played on the American people by both parties.  Congress carefully excluded campaign work to allow members to pour campaign money into the pocket of their own spouses and children.

Again, it is important to note that this type of payment to spouses continues in both parties.  As someone who have objected to this loophole for over twenty years, I am astonished that Congress has been able to get away with this practice for so long. Voters continue to be chumps who allow both parties to play them on blue state/red state politics.  When faced with ethical challenges, these politicians just ratchet up rhetoric against the other side.  When it comes to ethics, politicians know that the outrage lasts only until the next short news cycle and political shiny object.

If you really want to stop politicians from “prioritiz[ing] profit without considering who is profiting,” you can start with the families of people like Rep. Omar.