The mystery of what is causing thousands to die each year from a fatal kidney disease may now be solved, with evidence pointing to the world’s most heavily used herbicide Roundup (glyphosate) as the primary culprit.

A new study published in the International Journal of Environmental Research and Public Health proposes a link between the herbicide known as Roundup (aka glyphosate) and a series of mysterious epidemics of fatal chronic kidney disease of unknown origin (CKDu) affecting several poor farming regions around the world.

The extent of the health problem is so massive that the Center for Public Integrity found that CKDu has killed more people in El Salvador and Nicaragua than diabetes, AIDS and leukemia combined, over the past 5 years on record.

Titled, “Glyphosate, Hard Water and Nephrotoxic Metals: Are They the Culprits Behind the Epidemic of Chronic Kidney Disease of Unknown Etiology in Sri Lanka?,” researchers hypothesized that while glyphosate is toxic, it alone is not capable of destroying kidney tissue on the scale recently observed in rice paddy regions of Northern Sri Lanka, or in El Salvador where it is the second leading cause of death among men. They propose glyphosate becomes extremely toxic to the kidney when it mixes with ‘hard’ water or heavy metals like arsenic and cadmium, either naturally present in the soil or added externally through fertilizer inputs. Hard water contains ‘metals,’ such as calcium, magnesium, strontium and iron, along with carbonate, bicarbonate, sulphate and chlorides.

The new hypothesis explains a number of observations connected with the disease, including why in afflicted regions like Sri Lanka there has been a strong association between the consumption of hard water and the occurrence of this special kidney disease, with 96% of CKDu patients having consumed hard or very hard water for at least five years.

The image below shows how closely water hardness and the prevalence of CKDu overlap: 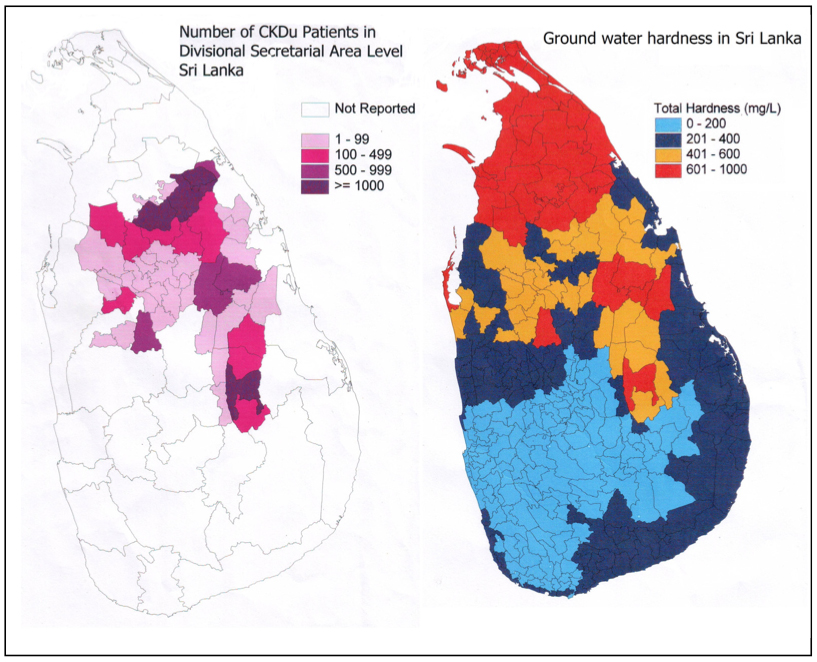 The discovery of a ‘new disease’

According to the study, a “Chronic Kidney Disease of Unknown etiology (CKDu)” was discovered among the rice paddy farms in Northern Central Province of Sri Lanka in the mid-1990s.  The condition spread quickly to other farming areas, and now afflicts 15% of working age people in the northern part of the country, or a total population of 400,000 patients with an estimated death toll of around 20,000. Watch the videos “Mystery in the Fields” and “Cycle of Death” for 5 minute documentaries providing additional background information on afflicted areas around the world.

CKDu does not carry the same known risk factors as chronic kidney disease, which include diabetes, high blood pressure and glomerular nephritis, an inflammatory kidney condition. The Sri Lankan Ministry of Health introduced criteria for CKDu in 2009, including:

Owing to the fact that geographical and socioeconomical factors play such a central role in determining risk, it has been assumed that environmental and occupational factors are the main causative agents and therefore that CKDu is a form of toxic nephropathy, i.e. chemically-induced damage. The authors point out that even the World Health Organization conducted studies to determine  the origin of CKDu, and that the general consensus is the disease as multiple causes, including:

The authors, however, propose: “Whatever hypothesis that is propounded should be able to answer the questions as to why CKDu is confined to certain geographical areas of Sri Lanka and why there was no CKDu in Sri Lanka prior to the 1990s.”

The study goes on to detail how since 1977 political changes in Sri Lanka lead to large scale importation and application of agrochemicals, especially for rice paddy farming. They propose that 12-15 years of cumulative exposure to low concentration kidney-damaging compounds, along with their increasing bioaccumulation within the environment and human body, could explain the sudden appearance in the 1990’s of clinically identifiable CKDu.  They hypothesized the existence of a so-called Compound “X” as the incriminating agent, which they determined would have to have the following characteristics:

Following an extensive search they arrived at glyphosate, which is the most widely used herbicide in Sri Lanka, as the likely culprit. They describe how glyphosate’s half-life can increase from several weeks in normal water to many years in hard water, as it forms hard to biodegrade glyphosate-metal complexes (GMCs).  GMC exposure can happen in two ways: consumption of contaminated hard water, or it can form within the human body following glyphosate’s entry into circulation. Farmers (and their families) are at constant risk of exposure through skin or inhalation, in addition to untreated drinking water.

The study describes in depth the way in which GMCs may evade the liver’s detoxification mechanisms and damage the kidneys. This is in addition to the over 20 distinct modes of toxicity we have indexed on the GreenMedInfo.com database on glyphosate harms.

Finally, the authors discuss evidence that glyphosate may be behind similar epidemics of chronic kidney disease of unknown cause in Central American countries of El Salvador, Nicaragua and Costa Rica, and India.

Sayer Ji is the founder of GreenMedInfo.com, an author, researcher, lecturer, and an advisory board member of the National Health Federation. Google Plus Profile. His writings have been published and referenced widely in print and online, including, Truthout, Mercola.com, New York Times online, The Journal of Gluten Sensitivity, New York Times  and The Well Being Journal. He founded Greenmedinfo.com in 2008 in order to provide the world an open access, evidence-based resource supporting natural and integrative modalities. It is widely recognized as the most widely referenced health resource of its kind.