“She Must Be Heard”: Republicans Join Fight To Delay Kavanaugh Confirmation Vote

Over the past few days, what appeared at first to be a merely token resistance to the nomination of Trump SCOTUS pick Brett Kavanaugh has morphed into something entirely more menacing. And for the first time since Kavanaugh’s name was first floated in June, his nomination may be in jeopardy.

After allegations of decades-old sexual improprieties first surfaced last week, it looked as if Kavanaugh would easily surmount this obstacle. But we have to give the Democrats credit: They have lined up their dominoes perfectly. And on Sunday, they set their plan in motion when the Washington Post published an in-depth interview with Kavanaugh’s accuser, Christine Blasey Ford. The story detailed a blow-by-blow accounting of Ford’s allegations, as well as her explanation for why she neglected to share her experience until decades later. Tellingly, the story also noted that Democrats have been sitting on the story since July, and that Ford only decided to out herself after some unscrupulous members of the Judiciary Committee shared her identity with the press – or at least that’s what California Sen. Dianne Feinstein’s office alleges.

While the allegations are relatively tame by #MeToo era standards (the incident allegedly unfolded when Kavanaugh was 17), it has apparently been enough for Democrats and a handful of turncoat moderate Republicans to successfully shut down a planned Thursday vote of the Judiciary Committee. Arizona Sen. Jeff Flake effectively shut down the vote last night when he revealed that he wanted to hear more from Ford before voting. Without Flake, the Republicans’ 11-10 majority on the Judiciary Committee shifts to a 10-11 vote in favor of the Democrats. While Committee Chairman Charles Grassley has said he’d like the vote to proceed as scheduled, media reports say he is quietly working to organize a private call involving Ford and curious Senators in an effort to help mitigate their concerns.

But looking further ahead, Republican leaders might have more difficulty as Tennessee Republican Bob Corker – who is not a member of the Judiciary Committee but could still hold up the final confirmation vote – said Sunday that he’d also like to see Thursday’s committee vote delayed.

“I’ve made it clear that I’m not comfortable moving ahead with the vote on Thursday if we have not heard her side of the story or explored this further,” said Flake, who has the power to stall consideration if all Democrats on the panel join him since Republicans only hold an 11-10 majority on the committee. Flake’s office didn’t respond to requests for comment.

Corker of Tennessee, who isn’t a member of the panel but whose vote is critical to confirmation, also doesn’t want the committee to vote on Kavanaugh’s confirmation until Ford’s allegations can be heard, said his spokeswoman, Micah Johnson. The senator wants the allegations to be heard promptly, she said.

“Well, I think that might be something they might have to consider, at least having that discussion,” Murkowski.

“This is not something that came up during the hearings. The hearings are now over. And if there is real substance to this it demands a response.”

However, at least one of the Senate’s reputed moderates has stood up to the Democrats in an interview with the New York Times, castigating them for withholding this information until so late in the process (remember: Feinstein justified this decision by saying she had referred Ford’s allegations to the FBI, who reportedly added them to his background check file).

“What is puzzling to me is the Democrats, by not bringing this out earlier, after having had this information for more than six weeks, have managed to cast a cloud of doubt on both the professor and the judge,” Collins told The New York Times.

Collins asked if Democrats believed Ford, “why didn’t they surface this information earlier,” and if they didn’t believe Ford, “why did they decide at the 11th hour to release it?”

“It is really not fair to either of them the way it is was handled,” Collins said.

Collins comments come after Ford spoke publicly about the alleged incident for the first time during an interview with The Washington Post that was published on Sunday.

On Monday, in the latest sign that Ford could appear at an embarrassing public hearing, Ford’s attorney, Debra Katz, told “Today” that her client would be willing to testify publicly before the Senate Judiciary Committee. “She’s a credible person. These are serious allegations. And they should be addressed.” 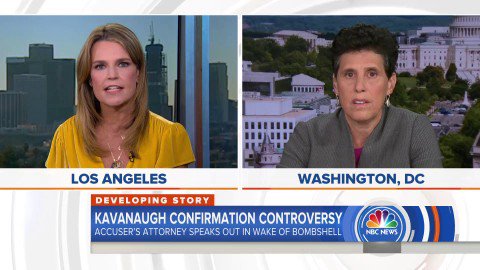 “She has taken a polygraph. She is a credible person. These are serious allegations, and these should be addressed.”

The White House, for its part, is standing by Kavanaugh, and allowing the Senate to sort things out. According to Bloomberg, Kellyanne Conway said Ford should not be “insulted and ignored” in what appears to be an attempt to beat the Democrats at their own virtue-signaling game.

Still, according to a White House spokesperson, Trump isn’t giving an inch. Washington Post reporter Seung Min Kim, citing WH spokesperson Kerri Kupec, reported that Judge Kavanaugh “categorically and unequivocally” denied this allegation: “This has not changed. Judge Kavanaugh and the White House both stand by that statement,” she said.

In fact, as Axios reports, Senate Republicans could “play hardball” by calling on Ford to testify before Thursday’s scheduled vote. Though Republicans wouldn’t surprised if Ford holds a press conference or gives a TV interview, which Axios says “would raise the stakes considerably.” Chuck Schumer, meanwhile, has repeatedly called for an FBI investigation and a postponement of the vote.

To be sure, the Democrats’ goals here are obvious. After Sen. Corey Booker’s “selfless” decision to release unauthorized documents about Kavanaugh’s time in the Bush Administration failed to even delay the process, Democrats have now played their Trump card – no pun intended. Their goal: Delay Kavanaugh’s confirmation at least until the Oct. 1 mark – the beginning of SCOTUS’s next term – to put a halt to any controversial decisions that could reverse important precedents. Of course, their ultimate goal is to stonewall the White House until after Nov. 6, when a few victories in the midterms might allow them to sink Kavanaugh’s nomination once and for all.

(TLB) published this article by Tyler Durden from where it appeared at ZeroHedge.

The Living Reality of Military-Economic Fascism