Super Vaccines Are Being Developed that Deliver Multiple Doses of Multiple Vaccinations in one Syringe … !!!

If you thought things could not get any worse, then think again. Imagine your child being vaccinated with a single vaccine that could deliver multiple doses of multiple vaccinations in one syringe.

According to a Daily Mail article, published in 2017, a vaccination was being invented that could prevent children from missing out on follow-up vaccinations which could, according to them, leave children vulnerable to life-threatening diseases.

“It works using tiny capsules programmed to break down at different times, releasing drugs into the body weeks after being injected. They are made from a safe substance already used by doctors for dissolvable stitches.

Experts say the capsules could be considered for use on the NHS in 12 years, potentially allowing babies to have their polio, meningitis and pneumonia vaccine in one doctor’s appointment.”

According to Allen, senior author of the study, Professor Robert Langer told reporters that:

“‘We are very excited about this work because, for the first time, we can create a library of tiny, encased vaccine particles, each programmed to release at a precise, predictable time, so that people could potentially receive a single injection that, in effect, would have multiple boosters already built into it.”

“Mechanical engineers designed the tiny capsules to be injected together at the same time. However, they are made from a polymer called PLGA, which can be designed to naturally break down at different rates, so that each capsule releases its contents when needed.”

“In mice, these capsules did not leak and discharged their contents in sharp bursts one at a time after nine, 20 and 41 days. They were filled with an egg white protein, which can be measured in the body by the animal’s immune reaction.”

Although many scientists were said to have embraced the idea, others voiced their concern.

Dr. Asel Sartbaeva, from the Bath University’s Department of Chemistry, told the Daily Mail that, although she believed that the concept of such a vaccine was a good idea, and a ‘great solution,’ she did have reservations. She stated that:

“I have a couple of reservations about this technology at the moment – would the individual vaccine components survive for days after the injection and how would the capsule materials be removed from the body?”

This is a very good question, however, according to the Mail, the vaccines containing the micro-capsules were part of a project funded by the Bill and Melinda Gates Foundation. They stated that it was hoped that these vaccinations would be of use in developing countries, where it was more difficult to transport vaccines to babies that do not have access to a doctor very often.

Another article that highlighted this study was published by 3 D Printing Industry.

“The technique has the potential to transform the vaccination for children and those most in need around the world, presenting “unprecedented opportunities” manufacturing for medicine and more.”

“The research is supported by funding from the Bill and Melinda Gates Foundation that aims to solve global health and development problems for those most in need.”

According to the article, the scientists have developed a way of making vaccines that release multiple doses of a drug, not necessarily vaccinations, over a controlled period.

“The technique has the potential to transform the vaccination for children and those most in need around the world, presenting “unprecedented opportunities” manufacturing for medicine and more.”

“The SEAL 3D printed molds are used to shape structures from FDA approved PLGA – a copolymer that is biocompatible, degradable and used for controlled drug delivery in cancer treatment and post brain surgery.

Each cup is filled with a liquid drug by an automated dispensing system. Afterwards, the lids are added and heated slightly to fuse together.”

In conclusion, Langer told reporters that:

“We are very excited about this work because, for the first time, we can create a library of tiny, encased vaccine particles, each programmed to release at a precise, predictable time.

The SEAL technique could provide a new platform that can create nearly any tiny, fillable object with nearly any material, which could provide unprecedented opportunities in manufacturing in medicine and other areas.”

On reading their article, it was difficult to ascertain whether or not the scientists had developed this method for the administration of drugs, vaccinations, or both.

However, if used to deliver multiple vaccinations, as was suggested by the Daily Mail and others, this method could have serious repercussions.

Concerned, I asked Dr. Saurabh Mehrotra what he thought about such a vaccination being given to vulnerable children.

“I do not think that it is good idea.

Vaccinations contain aluminium and aborted fetal cells, I don’t think that such elements should be used in vaccines.

“What is the use of injecting aluminium and such elements in babies? What are the results of doing such things?”

“There is difference between life cycle of human babies and mice.”

He explained that mice could not tell doctors what they are feeling, or how the vaccination was affecting them. He stated that just because a mouse has managed to survive its ordeal, it does not mean that the vaccination has not affected them. He continued:

“How can a mouse explain whether or not it is in pain, or what type of pain, if any, it is feeling? Burning? Shooting?

What is the criteria of defining such pain?”

His points are extremely valid and his questions need to be answered before such a vaccination is administered to vulnerable children.

Are These So-Called Super Vaccinations Safe?

To see if I could find the answers to Dr. Mehrotra’s questions, I decided to read the original study to examine exactly what criteria had been used, if any, to test such a vaccination.

This is what I discovered.

The study, written by Kevin J. McHugh et al., was published by ScienceMag.org in 2017.

“… To create these micro particles, fillable bases were molded using thermoplastic polymers and transferred to a glass slide to expose the empty particle core. Particle cores were filled with a model drug solution by using a BioJet Ultra picoliter dispensing apparatus (BioDot, Irving, California), aligned with capping polymer lids, pressed together, and briefly heated to seal the particles. These core-shell particles are potentially useful for biomedical applications because they are sufficiently small to be injected, can be created with fully biodegradable materials, and induce only a minimal foreign body reaction. Each particle weighs ~ 60mg and has a theoretical loading of about 2%; however, much higher loading can be achieved by varying the wall thickness to yield larger cores. Unlike emulsion-based processes, loading and kinetics can be decoupled. These devices or similar encapsulating structures could be used for controlled release of a drug after an appropriate stimulus. Because our initial interest was in creating pulsatile release for single-injection immunizations, we studied the release kinetics of a model antigen from PLGA micro particles. In this approach, multiple particles with different compositions could be co injected at the time of initial immunization, degrade over time, and release antigen in discrete pulses at time points that match typical vaccination schedules.”

Because the study was extremely scientific in content and difficult to understand, Science News had also reported on the paper in an easy-to-understand format. They wrote that:

“The new micro particles resemble tiny coffee cups that can be filled with a drug or vaccine and then sealed with a lid. The particles are made of a biocompatible, FDA-approved polymer that can be designed to degrade at specific times, spilling out the contents of the “cup.”

“In mice, the researchers showed that particles release in sharp bursts, without prior leakage, at 9, 20, and 41 days after injection. They then tested particles filled with ovalbumin, a protein found in egg whites that is commonly used to experimentally stimulate an immune response. Using a combination of particles that released ovalbumin at 9 and 41 days after injection, they found that a single injection of these particles was able to induce a strong immune response that was comparable to that provoked by two conventional injections with double the dose.”

In conclusion, they stated that:

“The researchers have also designed particles that can degrade and release hundreds of days after injection. One challenge to developing long-term vaccines based on such particles, the researchers say, is making sure that the encapsulated drug or vaccine remains stable at body temperature for a long period before being released. They are now testing these delivery particles with a variety of drugs, including existing vaccines, such as inactivated polio vaccine, and new vaccines still in development. They are also working on strategies to stabilize the vaccines.”

Nowhere in the original study, or in the numerous news reports written on this study, did I observe any discussion about whether or not combining multiple vaccinations was safe, or whether multiple vaccinations slowly being released into a baby’s blood stream could affect them in any way. 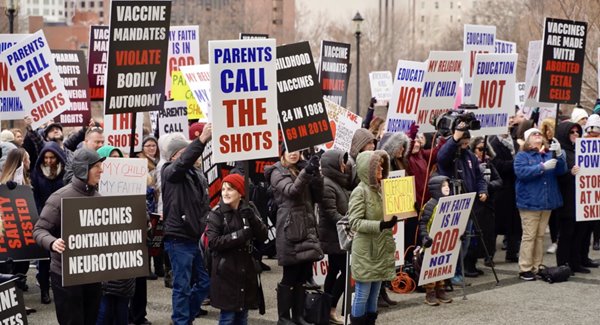 Christina was born and educated in London, U.K. She left school to work in a children’s library, specialising in storytelling and book buying. In 1978, Christina changed her career path to dedicate her time to caring for the elderly and was awarded the title of Care Giver of the Year for her work with the elderly in 1980.

After taking an A Level in Psychology and a BTEC in Learning Support, Ms. England spent many years researching vaccines and adverse reactions. She gained a Higher National Diploma in Journalism and Media Studies in 2010 and in 2016 she gained a BA Hons degree in Literature and Humanities. She currently writes for VacTruth, Health Impact News, GreenMedInfo, The Liberty Beacon, Vaccine Impact and Medical Kidnap on immunisation safety and efficacy.

She has co-authored the book – Shaken Baby Syndrome or Vaccine Induced Encephalitis – Are Parents Being Falsely Accused? with Dr. Harold Buttram and Vaccination Policy and the UK Government: The Untold Truth with Lucija Tomljenovic PhD, which are sold on Amazon. She also compiled the book Shattered Dreams: The HPV Vaccine Exposed

Her website is Parents and Carers Against Medical Injustice

COVID-19 & Lockdown … A Staged Event by the Rockefeller Foundation (Video)

Over The Counter (OTC) Safety vs Vaccine Safety