The FBI’s decision to recommend that no charges be brought against Hillary Clinton has been labeled a double standard of epic proportions, and now the decision will trigger further unintended consequences.

A Marine Corps officer who has been locked in a legal battle with his service after self-reporting that he improperly disseminated classified information now intends to demand the same treatment that Hillary received.

Brezler, who is still in the reserves and who works full time for the New York City Fire Department, was not charged criminally in the case, but he was issued a potentially career ending fitness (fit to continue serving) report after self-reporting that he sent the classified email to Afghanistan. Rep. Peter King (R-NY) even wrote then-Commandant Gen. James F. Amos about the case in August 2013 and asked whether it was necessary to be so harsh on someone who had warned fellow Marines of a potential threat in combat. Furthermore, the Naval Criminal Investigation Service reviewed electronics voluntarily turned over by Brezler and determined that there were more than 100 classified documents on his personal, unclassified hard drive and thumb drive. The board of inquiry recommended removing Brezler from the service in December 2013 after prosecutors argued that he knowingly kept classified information in order to help him write a book about his experiences in Afghanistan.

The case has been tied up in federal court since Brezler sued the service in December 2014, and Brezler’s attorney, Michael J. Bowe, intends to cite the treatment of Clinton as an example of how severely Brezler was punished.

An attorney for Brezler, Michael J. Bowe, said that he intends to cite the treatment of Clinton “as one of the many, and most egregious examples” of how severely Brezler was punished. FBI Director James B. Comey announced Tuesday that he would not recommend the U.S. government pursue federal charges against Clinton, but he rebuked her “extremely careless” use of a private, unclassified email server while serving as secretary of state. The FBI found that 110 of her emails contained classified information.

Bowe said it is impossible to reconcile President Obama’s statement that Clinton’s intentional act of setting up a secret, unsecured email server did not detract “from her excellent ability to carry out her duties” while Brezler received a “completely opposite finding… involving infinitely less sensitive and limited information.”

The FBI’s decision on Clinton will lend itself perfectly (and will very good reason) to those those such as Brezler who are being punished for similar or less severe incidents, to reference as they fight cases in court. Sadly, we must admit that unless your name is Clinton, there will be consequences to storing and sending classified information using an unsecured network – even if it is to warn fellow Marines of imminent danger.

The good news is that people, however few, are starting to catch on. 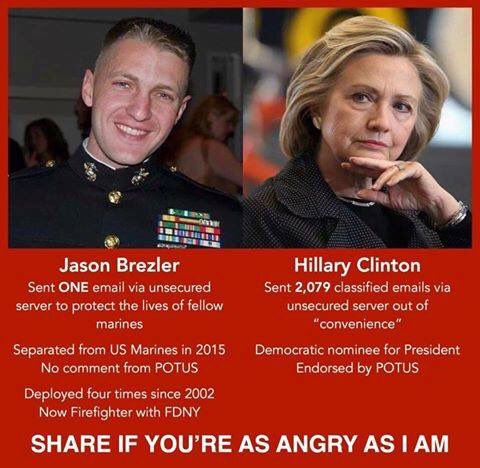 Note: My concern is the injustice visited upon Major Brezler.

Sec. Clinton held to one standard. Jason Brezler held to another. https://www.washingtonpost.com/news/the-fix/wp/2016/07/05/hillary-clintons-email-problems-might-be-even-worse-than-we-thought/ …

A very bad day for the Clinton campaign.

KEN’S CORNER: Interesting Points to Think About Prior to the 2020 Elections

1 Comment on The Blowback Begins: Marine Demands the Same Treatment As Hillary