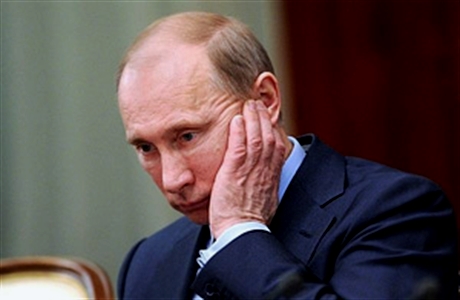 The VOLYA (Will) party filed a claim to the General Management Department of the President of Russian Federation, to the Main Healthcare Department of Administrative Department of the President of the Russian Federation, and to the Federation Council concerning health status of Vladimir Putin.
We are alarmed by the fact that Vladimir Putin is obviously unable to execute his presidential functions in full due to his health status, which, according to the Constitution of the RF, is a ground for termination of the execution of presidential powers.

Prolonged disappearance of person named Vladimir Putin from mass media in March, 2015 has been widely discussed in Russia. At that period the top officer of Russia cancelled pre-planned  international official meetings with heads of other states, postponed signing of international agreements. According to the news, the President hardly appears in his office in the Kremlin. Earlier international media informed that Putin was supposedly diagnosed with cancer.

Official statements on the subject do not seem credible to us. To determine date of his photo-sessions in the period is impossible.

At the same time the person presented by media as President Putin today is obviously not the Vladimir Putin, born in 1952, elected president of Russia in 2000.

The appearance of the people presented as Mr.Putin varies often, difference is seen by unaided eye.

We believe such differences may not be explained as age-related of caused by plastic surgery.

Many times it was noted that individuals presented by TV as Vladimir Putin have:

People able to identify the real Putin (his relatives including daughters and ex-wife) are hidden from the society unconventionally. For instance, nothing is known about Putin’s daughters. Rumors have it, that they live abroad. His ex-wife disappeared from TV since 2007 and hardly ever have appeared on public since then.
We have enough sufficient grounds to believe that real Vladimir Putin is either dead, or unable to execute duties of the President of Russia due to his health status.

Inability of Vladimir Putin to execute duties of President of Russia has obviously caused crisis in the country. We suppose that only persons acting in the interests of foreign countries could have committed that to Russia and its people. We concede, that destructive plans of Russia’s destruction by foreign special services and corporations may be committed in the guise of Vladimir Putin ruling. That means secret seizure of power in Russia. In terms of the failure or inability of the real Vladimir Putin to execute duties of the President of Russia, undivided authority of head of a state could have been seized by other people.

Majority of Russian population has been set on the brink of survival and often do not have enough money to feed families. Therefore, the President does not fulfill his duty to ensure the right of Russian citizens for decent life. Prices for utilities, gasoline, food, medicine absolutely unrealistic and exceed their real costs of production in Russia. Crushing taxes and fines have been killing domestic production and small business in Russia. Threat of hunger became real in Russia.

Repressive laws are being signed on behalf of the President of Russia. The laws are trampling the rights of Russian citizens on quality education and health care, parenting, freedom of expression, and even freedom of movement and of residence across the country. The total control is being strengthened via wiretapping, computers scanning, biometric passports implementation, which violates personal data confidentiality.

During Vladimir Putin’s presidency and his being prime-minister of Russia, a lot of so called “terroristic acts” and man-made disasters have happened causing mass deaths of Russian citizens. All terroristic acts had the same pattern: no claims, dead executors, and unidentified instigators. Therefore, public and independent experts put the blame for the terroristic acts on state special services.

Russia is dragged into a fratricidal war in Ukraine, and the war is moving to Russia as a result of obviously provocative actions of the person, claiming to be Russian President Vladimir Putin.

Russia has been set in absolute dependence on the West. Russian Central Bank belongs not to state, but to a private person, whose name is kept in secret. 95% of business in Russia is under the foreign jurisdiction. Huge financial reserves of Russia and even retirement savings of citizens have been spent on unrealistically expensive sport events such as winter Olympic 2014 and FIFA World Cup 2018.

We believe Russian citizens must be informed of the real state of heals of Russian president. According to part 2 Art. 24 of Russian Constitution, state bodies and officials are obliged to provide anyone with access to the documents and materials directly affecting his/her rights and freedoms. We believe, that ability of president, guarantor of our rights, to fulfill his duties affects every of us. Secret seizure of power by unknown people inevitably puts the country to chaos, blood, and hunger. We must prevent the danger.

TLB recommends that you  read other great/pertinent articles at: http://www.volya-naroda.ru/

The BRICS Bank: Next Stop On The Road To World Currency