Have you ever wished that you had the ability to foretell the future? If only you knew what was coming so you could be better prepared. If only astrology and fortune tellers were real. They are not real, but it is possible to know the future and all you have to do is to pay attention to what Hollywood and the rest of the entertainment industry is telling you about what is coming. The strategy employed by the elite’s control of Hollywood is to tell the public the horrific things that lies in our collective futures. Some people believe the elite must reveal what they are going to do. I have no idea if this is true. But what I do know is the Hollywood and the entertainment industry can tell us exactly what is coming and they do it often.

The control of Hollywood, by the elite, to deliver messages from the ruler of darkness that truly rule over our planet is called PREDICTIVE PROGRAMMING.

When it comes to legitmizing predictive programming, the Simpsons TV show is my favorite and absolutely has no equal. 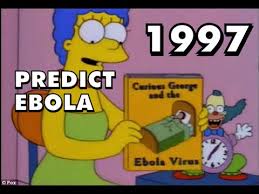 Even more telling was a cross-over episode in which the Simpsons and Family Guy “exposed the illuminati. Parents you might want to pay attention to what your kids are watching.

The Simpsons so-called “first cousins” over on the South Park TV show predicted that real outbreak of Ebola the same week as the first victim was diagnosed with Ebola inside of the United States. This means that the show, had to be produced about 6 months prior to the outbreak of Ebola, accurately forecasted what was to happen. Our popular entertainment media is championing the bifurcation of critical resources between the haves and the have-knots. For example, in the movie, Hunger Games, the ruling elite living in Capital City possessed life enhancing technologies that the rest of the people couldn’t even dream about. In the movie, Man of Steel, the birth of who we would come to call Superman, represented the first live birth in centuries on the mythical planet of Krypton. The movie made it clear that everyone else, on Krypton, for the past several centuries, had been bred for a specific purpose in which to serve the leaders of society in a transhumanist culture where genes were turned on and turned off as it befitted the leadership of the planet to breed people with specific skill sets. In the movie Elysium, the elite don’t even live on the earth, as they exist in a disease-free and idyllic world while leaving the bulk of humanity to suffer in universal Third World conditions.

Martin Odum, a FBI agent with the ability to transform himself into a different person for each job that he performs in his FBI role as an uncercover operative. Generally, thought to be the best at what he does, Odum is in danger of losing his real identity which is what eventually happens.

The show is in the beginning of Season Two and the setting changes from the United States to London. Odum is now a fugitive from justice as he has been framed for a political assassination. A traumatic brain injury of an unkown origin has caused Odum to lose his memory and with it, the knowledge of who he really is. While in the UK he attempts to track down people who could provide clues as to who he is. Odum reasons that once he knows his own identity, he can begin to prove his innocence for the capital crime that he is accused of perpetrating in the United States.

Episode 3 of Season 2 aired on November 22, 2015, aired the week after the Paris attacks. However, the show, which was about a radical muslim attack on Paris had to be produced at least 6 months in advance of the terrorist attack. Originally, TNT announced it would not run the episode in the aftermath of the attacks. However, someone above the TNT managment made the decision to air the show. Somebody wanted this show out there which was produced at least 6 months ahead of the actual attack. Interestingly, Season 2 is based in the UK. The decision to change scenes to Paris came out of the blue and would seemed out of place for most of the show’s viewers. This Episode and its predictive content was no accident.

I have not yet seen the last i the triology of the Hunger Games, but there will not doubt be much in the area of Agenda 21 for the “aware” viewer. Additionally, the Star Wars remake will most certain contain message from the elite to the rest of us who are clearly “not worthy” in the eyes of the elite.

The moral of the story is that if you want to know what is coming, simply pay attention to Hollywood.

Trump Drops a Hint to a Big Star: Run in Georgia Senate Election in 2022 [Video]

NGOs: Choice Tool of Subversion for the New World Order