Over 90% of the American people do not want Obama to attack Syria. The top military leadership in this country have also advised against this fool’s errand and the rank and file of military does not respect Obama, nor do they want to follow him down the path of destruction.

The following people, pictured below, and the criminal bankers that they represent, are the only ones that are itching for a fight with Syria. Below are the faces of the people who will soon become the world’s next war criminals.

On Sunday, Secretary of State John Kerry said the U.S. received new physical evidence in the form of blood and hair samples that show sarin gaswas used in the August 21 attack. To Mr. Kerry, I would say that nobody that is credible is disputing the use of sarin gas in Damascus. What is at issue is who perpetrated these attacks, al-Qaeda or Assad? Since Assad had nothing to gain from the use of the chemical agents except to invite Western military intervention, the perpetrator was undoubtedly the CIA backed al-Qaeda.

The fact that Secretary of State, John Kerry, said that the U.S. must respond because its “credibility on the line.” Really, Mr. Kerry, we have to attack Syria, kill tens of thousands of innocent civilians all because your administration’s credibility is on the line? Where do reckless statements, such as these, cross over the line from abject stupidity and enter into the realm of casting this administration as a regime which commits war crimes against the helpless? If this administration attacks the innocent people in Syria, that is precisely what the responsible people will become, war criminals.

Assad is nobody’s fool, he has had time to make himself and his military an elusive target in which multitudes will perish in the attempt to find and eradicate his forces. over a wide geographic area.

Knowing that an unwarranted American military attack is inevitable, military officials have stated that Assad has responded by moving his assets such as military helicopters, tanks as well as heavy artillery pieces around the country, thus forcing the U.S. to reconfigure the use of cruise missiles and air strikes over a wider range of territory. Further, this does not totally mitigate the nearly 700 SCUD missiles that Assad has pointed at Israel. If Syria is attacked, it is clear that Israel will also be attacked, by Syria, and this when events could quickly spin out of control and lead to a much wider conflict.

If Obama sticks with targeting a well-defined set of military and intelligence assets, then the wider dispersal range of the cruise-missile strikes, will subsequently create a much greater loss of innocent civilian lives. This will not deter a psychopath like Obama.

Since military officials have told Obama that he would have to adjust his attack strategy to match Assad’s dispersal of weapons by expanding the number of strikes to hit more targets, this is a prescription for disaster and greatly increases the likelihood that Hamas will become involved as agents of Assad as this relationship is well established. Will Hamas be given chemical weapons? Will they carry out false flag suicide attacks? As long as five years ago, Hamas has been linked with Mexican drug cartels which have penetrated into the United States. If Obama were to ever need a false flag attack pretext in which he could blame Iran as a precursor for invasion, Hamas is the most likely entity to fulfill this role. Subsequently, there is a hidden cost to pay by widening the war in going after Assad’s military hardware. These facts, alone, fully exposes the Obama deception for what it truly is because no rational leader would avenge Syrian civilian casualties caused by a sarin gas attack by killing tens of thousands of more innocent Syrians.

It is so clear that taking out Assad is only a means to an end which is to use Syria as a launching pad from which to conduct a regime change in Iran and thus, save the almighty Petrodollar. Everything else is just theater.

Another senior military official said the dispersal of Assad’s military assets was “certainly detrimental” to target planning.This means a wider and more deadly war along with the possibility of escalating into World War III.

Even General Dempsey has reservations about attacking Syria.

Chairman of the Joint Chiefs of Staff, General Martin Dempsey, has issued a warning to this administration about the folly of a military attack upon Syria. Dempsey wrote last month that, “As we weigh our options, we should be able to conclude with some confidence that use of force will move us toward the intended outcome. Once we take action, we should be prepared for what comes next. Deeper involvement is hard to avoid.” And what would Dempsey be referring to with regard to deeper involvement and the problems that would follow? Dempsey is clearly worried about what comes after an attack upon Syria. He is warning about the possibility of World War III. This is precisely what Dempsey warned Congress about in a letter to the Senate Armed Services Committee. In an interview with ABC News, Dempsey also stated that the lessons of Iraq heavily influenced his beliefs regarding Syria.

The rank and file of the military is speaking out against Obama’s war mongering ways. I have been inundated with communications from active duty personnel which strongly indicate that they are opposed to war in Syria. The military has crossed an imaginary line in the sand with regard to resisting Obama’s insane foreign policies.

The military used to accept their mission without question. However, with the slaughter millions in Iraq and the US military forced to guard the heroin shipments by al-Qaeda in Afghanistan, the military has had enough. The disdain of the military for the failed policies of this administration also explains why, last fall, we witnessed two senior command officers, General Hamm and Admiral Gayoutte, attempt to rescue Ambassador Stevens in violation of Obama’s orders to stand down and to let the Ambassador be murdered by al-Qaeda. At the time, I called the event an attempted coup against the President and if these two officers had rescued Ambassador Stevens, Obama would have had his hands full with even more acts of insubordination by military personnel and Obama would have likely faced impeachment before 2012 election. And let us not forget the debacle of the removal of General McChrystal as the commanding general in Afghanistan because of his negative statements about Obama’s leadership as reported by Michael Hastings.

Obama has changed military leadership more than most people change their underwear. The military has had enough of the bankster driven goals which are serving to undermine and misuse the military, to the detriment of the American people. I have often written that Obama could very well be the victim of a military coup and when the Chairman of the Joint Chiefs of Staff questions Obama’s intentions in Syria and that criticism is public, Obama had better surround himself with more than the Secret Service in order to prevent the long simmering desire for a coup against Obama that is ready to fully come out of the closet.

Last week, I serendipitously watched the 1964 classic movie, Seven Days in May, starring Kirk Douglas and I thought I was watching a news story about today’s strained relationships between senior military command leadership and their President. In the movie, the Joint Chiefs launched an unsuccessful coup against the President. Today, I think a coup could and would succeed. I believe that Syria will be this President’s Waterloo if he prosecutes this war. However, how many people must die before the military comes to their complete and full senses and arrests Obama for treason and crimes against humanity?

The topic of a military coup is a slippery slope and is profoundly distasteful to me because military coups usually lead to a military dictatorship and that frightens me almost as much as the Obama presidency. However, Obama’s presidency is unsustainable and he must be removed from office, hopefully through the impeachment process as initiated by Congress. Obama’s complicity in the death of Ambassador Stevens would be an appropriate place to begin the impeachment process.

The Syrians Are Opportunistic Propaganda Warriors

The Syrian Electronic Army (SEA) wrote a lengthy message to their “friends” in the U.S military according to the International Business Times. This message was a peace offering and declaration of good will towards American soldiers. In the message, the SEA asked the American military to stand down and refuse orders to attack the people of Syria. I echo these sentiments. Syria has done nothing to the United States and poses no danger. What is going on inside of Syria is an internal matter. Certainly, our banker controlled government saw fit to let the carnage continue in Rwanda in which one million innocent people were butchered in a 90 day period. The death of Afghan children by drones, by Obama’s hand, does not spark outrage from these bankster controlled minions. Why Syria? I say, why the Petrodollar?

The SEA hacked pictures American soldiers holding signs protesting the coming Syrian war. This was a brilliant move! The Syrians know our troops are war weary and they are playing upon military frustration. No, it is not likely that the following picture is genuine. It is photo-shopped. However, the Syrians have captured the essence of feelings that our soldiers and their leaders have toward Obama. Last night, I spoke on a radio show with Mr. Strange, who’s son, of Seal Team Six, was murdered by this administration, to cover up the games played by these war criminals. The grieving father expressed such rage and hostility towards Obama and he was quite clear about how his feelings are the norm in the US military. For these reasons and more, I cannot foresee a scenario where Obama will complete his second term. I think he will leave office in handcuffs as a result of a military coup or he will be tried and convicted as a result of the many Watergate types of scandals he has hanging over him. 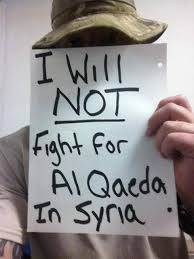 Despite the fact that the above are expressions of an anti-war sentiment which were the product of Syrian disinformation, these beliefs do reflect the true attitude of the American military.

Nobody wants this war, except for the people who have much to gain, and they are going to attempt to achieve their goals at the expense of the welfare of humanity. The late, great, Michael Jackson, was wrong about one thing, one bad apple does indeed spoil the whole bunch.

If we do not quickly change course with regard to Syria, we may soon find out if America is truly a nation under judgment. With World War III on the horizon, we need to pull back and refrain from any further military action in the Middle East before it is too late.

6 Comments on The US Military Fears War With Syria