ER Editor: In the Daily Mail story below, the Greek islands of Lesbos, Samos and Chios (among others) are mentioned. These are all dotted along the coastline of Turkey (see map below, with Lesbos indicated by the red marker) and thus much closer to Turkey (to the right of the map) than Greece. On these small islands are currently camped around 42,000 migrants who have mostly come from non-EU member Turkey, and the government apparently has plans to build LARGER camps, thus holding more. This has to be a definition of insanity. Migrants spend months in these camps, before being able to enter Greece, while their asylum claims are processed. 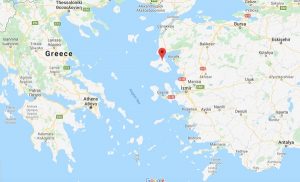 Note in the story below how a raft of human rights organizations are more concerned about racist attitudes toward these people than the plight of the established residents of these islands, who are clearly suffering from some pretty appalling behaviour. See also this BBC report, although it downplays (predictably) the violence committed by migrants. Some of these islands are famous tourist destinations, so such a sustained invasion represents a significant loss of revenue as tourist numbers decline.

Thousands of Greek protesters demand asylum seekers are removed from their islands, as locals claim: ‘You can’t walk alone after dark, people get stabbed’

Thousands of Greek protesters have demanded asylum seekers be removed from their islands amid overcrowding and violence at the refugee camps.

The islands of Lesbos, Samos and Chios staged a general strike, shutting down shops and public services and rallying in central squares, with protesters shouting: ‘We want our islands back, we want our lives back.’

The islands of Lesbos, Samos and Chios staged a general strike, shutting down shops and public services and rallying in central squares, many protesters waving Greek flags.

Asylum-seekers should be shared out across Greece and the rest of Europe, 72-year-old Lesbos pensioner Efstratios Peppas said. ‘You can’t walk alone outside after dark, people get stabbed,’ he added.

The main slogan chanted at demonstrations was: ‘We want our islands back, we want our lives back.’

The largest camp of Moria on Lesbos island, with a capacity for 2,840 people, hosts more than 19,000 asylum seekers. 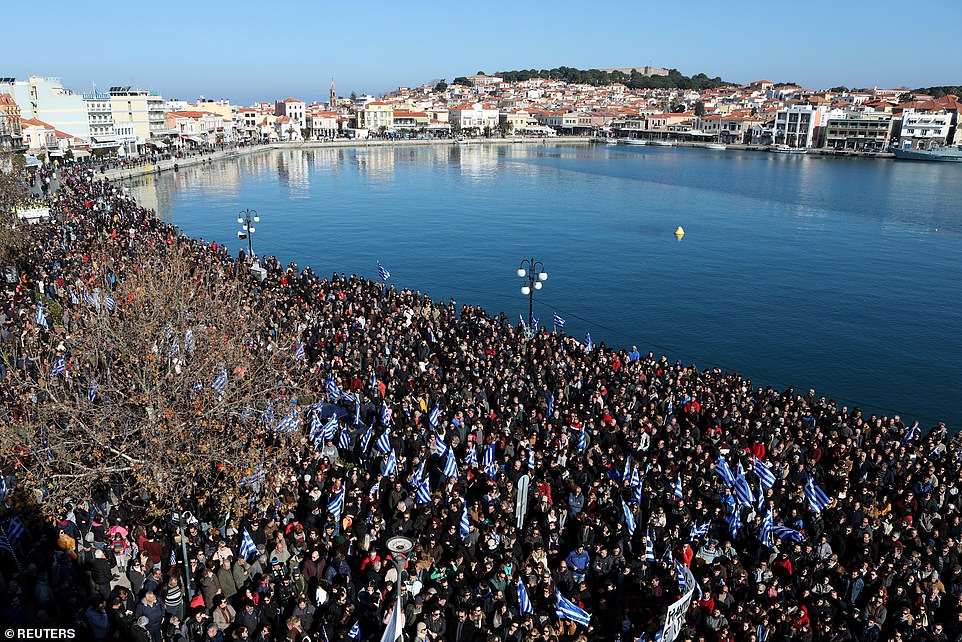 The islands of Lesbos, Samos and Chios staged a general strike, shutting down shops and public services and rallying in central squares, many protesters waving Greek flags (pictured: thousands on the streets of Mytilene on the island of Lesbos in Greece on Wednesday) 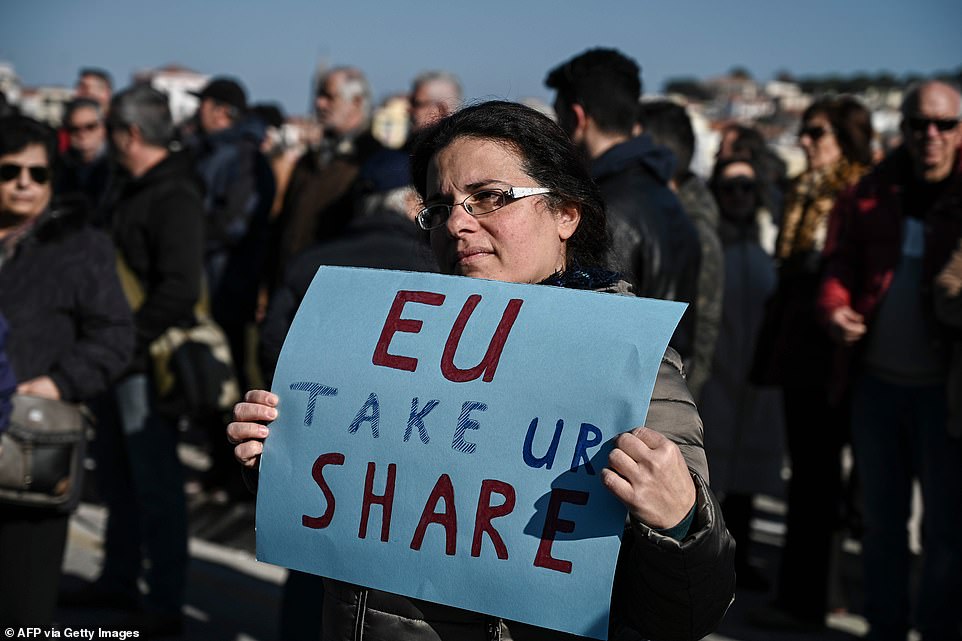 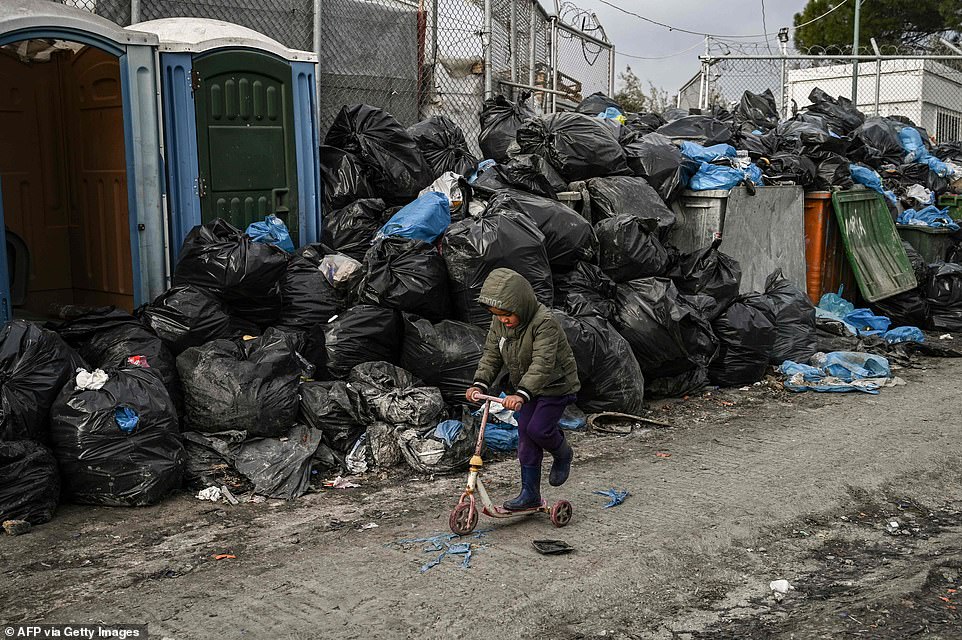 A child rides a scooter next to garbages at a makeshift camp next to the refugee camp of Moria, in the island of Lesbos on Tuesday.

The overcrowding is equally severe on other islands, and rights groups and medical charities have repeatedly criticised the living conditions at the camps.

The government announced plans in November to build larger camps on Lesbos, Chios, Samos, Kos and Leros, which currently host a total of nearly 42,000 migrants and refugees and where outbreaks of violence are frequent.

The day of protest was organised by regional governors and mayors who plan to travel to Athens on Thursday to present their demands to the government.

Nearly 75,000 people crossed illegally to European Union member Greece from Turkey in 2019, according to the U.N. refugee agency, an increase of nearly 50% from the previous year.

Two young asylum-seekers have been fatally stabbed in brawls at the Moria camp this month. An 18-year-old Afghan girl was also seriously injured in a knife attack this week and remains in hospital.

And three asylum-seekers in Greek custody have committed suicide in recent weeks.

‘We demand the immediate shutdown of Moria,’ read a banner carried in the Lesbos demonstration.

But the new camp plans have been strongly opposed by local officials, who want smaller facilities after hosting thousands of asylum seekers for the past five years.

‘What we want is for people to be transferred to the mainland in greater numbers, for the camp to be phased out and closed, and for any new facility to be located far away from populated areas,’ Yiannis Mastroyiannis, the leader of Moria’s municipal council, told protesters at the main square on Lesbos. ‘The people in this area have suffered enough.’

Greece last year again became the main entry into Europe for migrants and refugees, many fleeing war or poverty in sub-Saharan Africa, South Asia and Syria.

Nearly 75,000 people crossed illegally to European Union member Greece from Turkey in 2019, according to the U.N. refugee agency, an increase of nearly 50% from the previous year

On Tuesday, 17 human rights organisations warned of a rising ‘climate of discrimination and xenophobia’ towards asylum-seekers, who also faced ‘serious consequences to their well-being and public health’.

The government announced plans in November to build larger camps on Lesbos, Chios, Samos, Kos and Leros, which currently host a total of nearly 42,000 migrants and refugees and where outbreaks of violence are frequent.

Already more than 3,000 have arrived so far this year.

Only a fraction are allowed passage to the Greek mainland while the rest spend months in the camps, waiting for their asylum applications to be processed.

Amsterdam: Businessman Returns From Vacation to Find His Property Occupied by 40 Asylum Seekers

Seven changes needed to save the euro and the EU