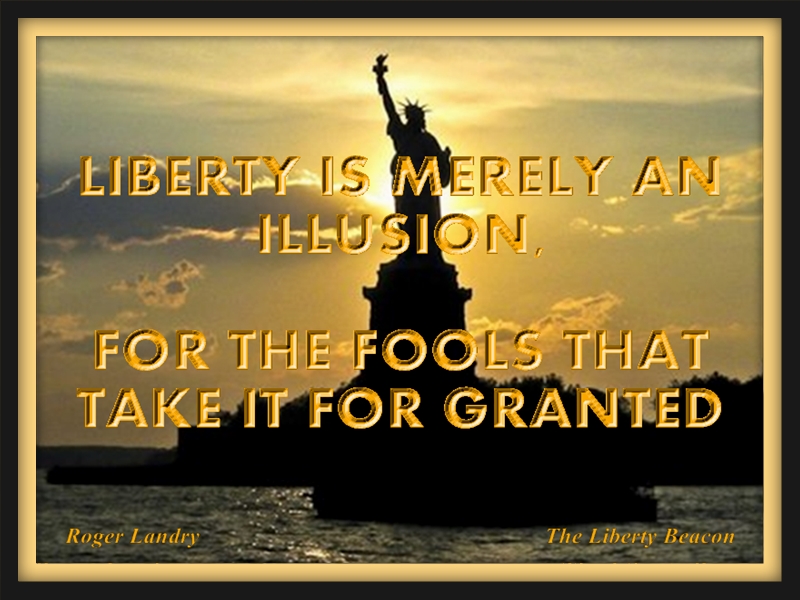 Anyone who truly believes that all the woes suffered by We The People today, be they political, economic, or liberty related, can be resolved by the election of a new Constitutionally minded leader of national standing … is only fooling themselves, FACT!

The corruption and complicity is so ingrained in the political hierarchy by the elitist (puppet masters) as to ensure its propagation or at the very least, its survival.

Top down change via the mechanism stated above is a ruse offered to us to foment the belief that we in fact have a say in how we are governed, but in fact will continuously lead to a dead end or business as usual.

The only recourse available to us to take back America and once again make it a nation of, by and for the people, is to start from the bottom and expand up spreading our word and ideals as a mighty oak does in an unstoppable and ever expanding scenario from a seed into a cascade of roots limbs and branches conquering all it surveys.

What we now present is a partner organization with just such a plan. A plan based on sound logic that includes a role for each and every one of us … Including the voice of The Liberty Beacon project.

We strongly encourage you to read the following and get involved. You want answers, solutions … HOPE … then in our humble opinion … you are and have always been looking for …

Democratic and Republican Party leaders control virtually every county in the USA and are working against the Constitution and the Bill of Rights.

We encourage Liberty fighters to get involved as Precinct Captains/Chairs in their county, in the party of their choice, or as independents. The precinct captains elect county party leaders who endorse the candidates. Change the party leaders, change the lawmakers, and restore the Constitution.

This is how we can take back the nation for Liberty, precinct by precinct, county by county, and state by state.

Here is The Plan to Take Back the Republic!

Passing around real news is a start, not a plan. Let’s constitutionally takeover the criminals in DC.

FREEDOM ISN’T FREE, DO YOUR PART … EVERYBODY INTO THE BATTLE !!! 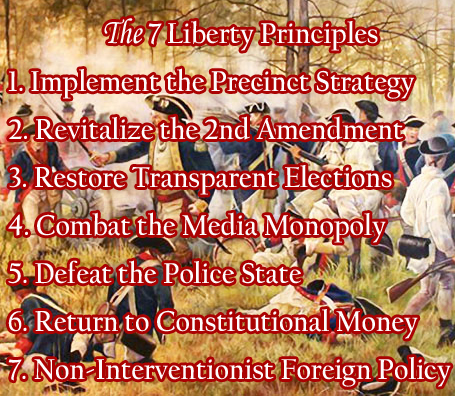 Network America believes that the 7 Principles developed by Guardians for Liberty will provide a sound basis which will also ensure the widest possible participation in the Precinct Takeover.

Democratic and Republican Party leaders control virtually every county in the USA and are working against the Constitution and the Bill of Rights. We encourage Liberty fighters to get involved as Precinct Captains/Chairs in their county, in the party of their choice, or as independents. The precinct captains elect county party leaders who endorse the candidates. Change the party leaders, change the lawmakers, and restore the Constitution. This is how we can take back the nation for Liberty, precinct by precinct, county by county, and state by state.

The first clause of the 2nd Amendment is the Founding Fathers’ vision for maintaining a free nation. In addition to restoring fully the right to own and bear arms individually. We must also restore the implementation of the first clause, which instructs each state to organize & train well-regulated, disciplined forces under the Governor, and under a designated local official in each county, to repel foreign invaders, to aid the citizenry during natural disasters, and to restrain public officials from violating the constitutional rights of citizens.

Secret Computer Programs now “count” the ballots in more than 99% of elections in the USA. Two standing Supreme Court decisions state that secret counts are illegal. The people must demand computer-free, machine-free elections. We must restore hand-counted paper ballots in each precinct, counted, posted, and reported BEFORE the ballots leave public sight.

A Ruling Elite controls news, art, and culture through a giant media cartel (especially ABC, CBS, NBC, CNN, FOX, AP, as well as related mainstream media such as Clear Channel Radio, Simon & Schuster, Sony, ATT, Verizon, etc). Americans must be made aware of this reality. We need to encourage, support and redirect people to independent, accurate news sources, and uplifting, liberty-minded, historically accurate programs, movies, music, and art, both on and offline. Americans must oppose any effort to stifle free communication and speech on the internet.

According to such sources as the Denver Post, Washington Post, and Forbes, The Department of Homeland Security has bought 1.5 Billion rounds of ammunition, 2700+ armored tanks to patrol the streets of the USA, and is building 30,000 killer-spy drones to fly over our nation. Other incursions against our freedoms are exemplified by the NDAA, the so-called Patriot Acts, Agenda 21, SOPA/CISPA, etc. We must defeat this encroaching Police State by defending the true freedoms of the Constitution and the Bill of Rights.

The Federal Reserve operates in secret and is destroying our nation’s money. Replace the FED with a Monetary Office under Congress as authorized by the Constitution, operating in the open, issuing interest-free money (redeemable in gold or silver, which have intrinsic value) to the nation, and ensuring that the nation’s money supply is approximately equivalent to available goods and services in order to facilitate the needs of business and commerce.

A Ruling Elite (behind international banking institutions such as the FED, IMF, and Goldman-Sachs) has hi-jacked American Foreign Policy and is building an evil empire at odds with our national interests. Pursue honest friendship with all nations, entangling alliances with none (the policy enunciated by Thomas Jefferson and encouraged by George Washington in his Farewell Address). Seek “Fair Trade” with non-slave nations.

“If ever the time should come, when vain and aspiring men shall possess the highest seats in government, our country will stand in need of its experienced patriots to prevent its ruin.”
– Samuel Adams

You can study the 7 Principles at www.GuardiansForLiberty.com

Would you like to escape the rat race of typical social media, the constant aggravation of trolls and shills hell bent on disrupting your message, and hold meaningful discussions with those who share your views and desires for a renewed America?

Would you like to put forth meaningful information for those who truly wish to be educated free of the bonds of the disruptions stated above?

Then Network America also offers you this opportunity … 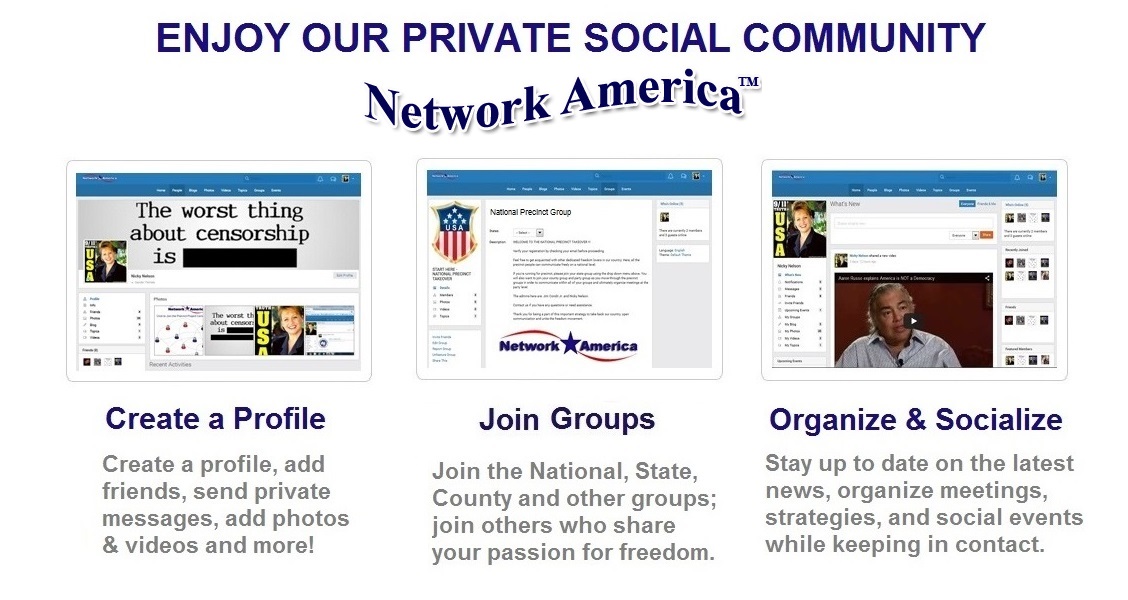 The Precinct Takeover Social Network is organized with over 20,000 groups from the National, State, and County levels throughout the United States including all the existing political parties at the county levels, if you decide to choose to join sign up in one. or more.

You can also join other clubs and groups and/or make your own! We have started off with a few liberty groups outside of the Precinct Takeover Strategy to help get us started, such as the Constitution and Second Amendment Clubs, a Prepper Club including an In-Depth Preparedness course, along with a HAM Radio Club, but again, feel free to make your own groups and clubs.

Unlike other well-funded “Liberty” organizations, this grassroots network wants to facilitate open communication among ALL members, so we can get organized and take real, meaningful action; the members ARE in essence the network itself! 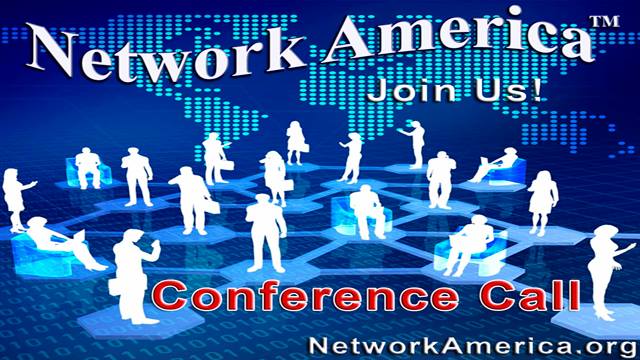 Join us for a the NetworkAmerica.org weekly Conference Call for updates and progress on the plans, launching, and progress of Network America.

* The first 20 minutes or so are a presentation from a Leader or Leaders.

* the next 40 minutes are your calls — for questions or comments.

* Finally the lines are opened at about 11 PM EST (8 PM PST) for participants to have open discussion with each other.

Please sign up/sign in at www.NetworkAmerica.org/Network during the conference calls so we can chat amongst ourselves during the calls. When we do, the Admins will pick up on our conversation and may mention our points and bring more discussion on air. – Gene H.

TLB has barely scratched the surface here with respect to the information and opportunity presented by our valued partner. Please visit Network America to understand that all is not lost:

THERE ARE VIABLE ANSWERS & SOLUTIONS! 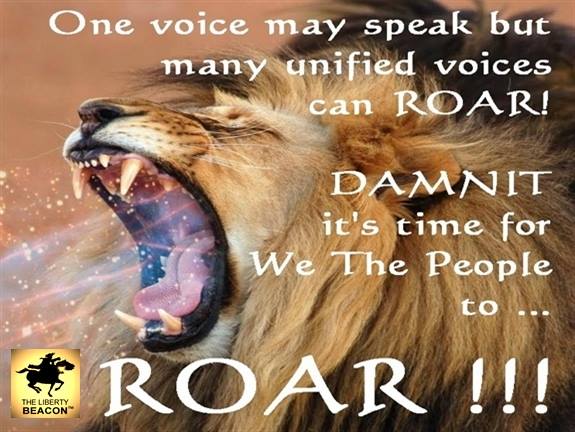