Who Called Pres. Elect AMLO of Mexico and said No Go

by The Liberty Beacon staff

First the wind blows one way and then another. That’s the way of Politics and Diplomacy. At times change is brought on by being put in a position of having to, shall we say, “strategically” lie.

IS that the case of a Secret Deal reportedly between the U.S. and Mexico to handle the influx of immigrants?

Who picked up the telephone and called the President Elect of Mexico and said no deal?

Last evening TLB published an article that was well sourced and backed by U.S. and Mexican Elect officials that take control on December 1st….

“The deal took shape last week in Houston during a meeting between Marcelo Ebrard, Mexico’s incoming foreign minister, and top U.S. officials such as Secretary of State Mike Pompeo and Homeland Security Secretary Kirstjen Nielsen, according to U.S. and Mexican officials.”

While the deal is intended to be a “short term” solution, the “medium-to-long” term plan, according to Mexican officials, is that Central American migrants “remain in Mexico.”

“For now, we have agreed to this policy of Remain in Mexico,” said Olga Sánchez Cordero, Mexico’s incoming interior minister, the top domestic policy official for López Obrador, who takes office Dec. 1. In an interview with The Washington Post, she called it a “short-term solution.”

“The medium- and long-term solution is that people don’t migrate,” Sánchez Cordero said. “Mexico has open arms and everything, but imagine, one caravan after another after another, that would also be a problem for us.”

The deal is the clearest indication yet that Trump and AMLO are enjoying a more cordial relationship than many had expected. And while a court challenge to the plan could still materialize, US courts don’t have jurisdiction in Mexico. With this in mind, it appears Trump has finally found a way to circumvent the “Obama judges” who have been the biggest obstacles to his immigration policy.  – Washington Post

A New Day finds ‘the worm’ turning and squirming…

(ZeroHedge) Mexico’s incoming government has denied striking a “Remain in Mexico” deal with President Trump which would require migrants applying for US asylum to wait in Mexico, according to Reuters.

There is “no agreement of any type between the future government of Mexico and the United States,” said Olga Sanchez Cordero, Mexico’s incoming interior minister and top domestic policy official for president-elect Manuel Lopez, who takes office on Dec. 1. The statement contracts a Saturday report in the Washington Post. 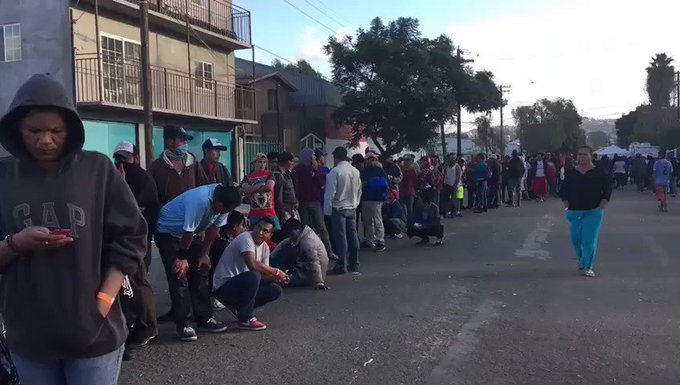 The line for food just outside the camp confines. Free meals are served at 10am and 5pm. There are 5,150 migrants now at the camp in Tijuana.

Cordero told Reuters that the incoming government was in talks with the Trump administration, but made clear that they could not make any agreement since they are not yet in power.

Sanchez ruled out that Mexico would be declared a “safe third country” for asylum claimants, following a Washington Post report of a deal with the Trump administration known as “Remain in Mexico,” which quoted her calling it a “short-term solution.”

The plan, according to the newspaper, foresees migrants staying in Mexico while their asylum claims in the United States are being processed, potentially ending a system Trump decries as “catch and release” that has until now often allowed those seeking refuge to wait on safer U.S. soil. –Reuters

Meanwhile, Mexico’s incoming deputy interior minister Zoe Robledo said that the details of the “Remain in Mexico” plan were still under discussion. Robledo told Reuters, adding that the incoming government sought to find jobs for Central American migrants which are understaffed – such as maquila assembly plants where multinational corporations take advantage of cheap labor for the final stages of production.

“What we’re aiming for is that people leaving their countries due to security issues or violence can find a place to stay in Mexico if that is their decision,” Robledo added.

In a Saturday Tweet, Trump declared: “Migrants at the Southern Border will not be allowed into the United States until their claims are individually approved in court. We only will allow those who come into our Country legally. Other than that our very strong policy is Catch and Detain. No “Releasing” into the U.S.,” adding “All will stay in Mexico” in a second tweet in which he threatened to close the southern US border if necessary.

Migrants at the Southern Border will not be allowed into the United States until their claims are individually approved in court. We only will allow those who come into our Country legally. Other than that our very strong policy is Catch and Detain. No “Releasing” into the U.S…

….All will stay in Mexico. If for any reason it becomes necessary, we will CLOSE our Southern Border. There is no way that the United States will, after decades of abuse, put up with this costly and dangerous situation anymore!

Trump’s plan is “outright illegal” according to Jenna Gilbert, managing attorney for the Los Angeles office of Human Rights First, adding “I’m sure the administration will once more see itself in court.”

Sanchez, who said the situation of migrant caravans was “very delicate,” did not explicitly rule out that Mexico could keep caravan migrants on its soil while their U.S. asylum claims are processed. But she told Reuters that plans to assume “safe third country” status were “ruled out.” –Reuters

You have witnessed the previously mentioned Wind of Change and the Lie. Does that apply here? We will leave that up to you, our dear astute reader.

Who called incoming Mexican President Andres Manuel Lopez Obrador (AMLO) and gave him his new marching orders and a bucket to Carry the Message in. We could start with little hesitation in naming George Soros Inc. or any number of heavy hitting Global Socialist that would consider this Trump Plan a jab in their solar plexus. Globalist hate to play Trump’s version of “Let’s Make A Deal.”  (H/T Monty Hall)