The amendment prohibited government from mandating back-doors into encrypted communications.

Late Thursday, the U.S. House of Representatives blocked an amendment that would have prohibited warrant-less surveillance of Americans’ electronic communications and banned the government from forcing technology companies to install back doors to encrypted devices.

The amendment to the House’s annual military spending bill, introduced by Reps. Thomas Massie (R-Ky.) and Zoe Lofgren (D-Calif.), failed by a vote of 198-222. The roll call is here.

The vote signals a notable turnaround for the House, which has previously passed the measure in a landslide—twice—with bipartisan support, before progress was stymied by U.S. Senate leadership.

It was a painful loss for privacy advocates ranging from members of Congress to civil liberties groups like the ACLU, the Center for Democracy and Technology (CDT), and the Electronic Frontier Foundation (EFF).

Massie and Lofgren noted that under Section 702 of the Foreign Intelligence Surveillance Act (FISA), Americans’ private electronic communications are swept up without warrants or probable cause by law enforcement agencies investigating terrorist links overseas—violating their Constitutional rights.

“I think our citizens are fed up with being spied on by the government,” Massie said.

Lofgren added, “This amendment is the most meaningful step Congress can take to end warrant-less bulk collection of U.S. persons’ communications data, as well as protect that data from malicious hackers and bad actors.”

On Thursday, lawmakers who voted against the bill tied their opposition to Sunday’s nightclub massacre in Orlando, claiming that the measure would prevent intelligence agencies from searching through the communications of shooter Omar Mateen, who was an American citizen. Republicans on the Intelligence Committee sent an open letter to colleagues in the days before the vote petitioning them to “give our Intelligence Community all of the authorities it needs to detect and stop terrorist attacks.”

But supporters countered that the amendment would not hamper law enforcement investigations. Massie warned that “Congress should not abandon the Constitution in the face of terrorism.”

“This doesn’t take any tools away from those that want to investigate what happened in Orlando, none whatsoever,” he said. “You obviously can get a warrant on the perpetrator of this crime.”

Lofgren said, “With threats to America, we should not endanger the security of our digital environment by weakening encryption that protects everything from the power grid to air traffic control.”

Kevin Bankston, digital rights attorney and director of the Open Technology Institute at New America, responded to the vote, “With Orlando fresh in everyone’s minds, members of Congress appear to be voting based on fear rather than on reason.”

Thursday’s arguments cover similar ground as the debate after the San Bernardino attacks, as anti-privacy lawmakers and the intelligence community called for impeding civil liberties in the name of national security—notably, by attempting to force Apple to unlock the encrypted iPhone of suspected San Bernardino shooter Syed Farook.

But as Bankston explained Thursday, “There’s no reason to think that mandating backdoors into American companies’ encrypted products, or allowing warrantless searches of Americans’ private data, would’ve prevented this weekend’s horrible tragedy. But that hasn’t stopped security hawks from exploiting the Orlando shooting to defeat this amendment.”

Elected representatives have once again been scared away from “standing up for Americans’ civil liberties,” Bankston said.

This work is licensed under a Creative Commons Attribution-Share Alike 3.0 License

Want News and Views from a European perspective? Go to EuropeReloaded.com [A TLB Project]

Life in the Electronic Concentration Camp: The Surveillance State Is Alive and Well 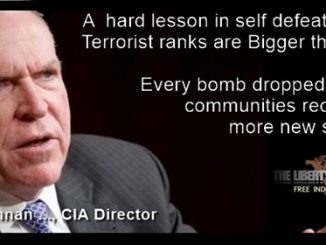