As California and New York said they’d coordinate reopenings with neighboring states, mainstream US media suddenly rediscovered the virtue of federalism, while some online activists even cheered the notion of separatism.

California Governor Gavin Newsom got the ball rolling Monday, by announcing his state would coordinate ending the coronavirus shutdown with the neighboring Oregon and Washington further north – both run by Democrats as well – and not follow the lead of President Donald Trump and the federal government in Washington, DC.

The West Coast is ahead of the curve on COVID-19. We’re going to make sure that stays true.

WA, OR and CA will work together on a shared approach for reopening our economies. #WeGotThisWA

Such theories were further fueled by Newsom’s comments last week, when he described California as a “nation-state.” Asked about it on Monday, he defended it as a “choice of words that gives you a sense of the scale and scope,” for a state that’s “larger than 21+ states combined, the world’s 5th largest economy, most diverse state and democracy.”

That was enough for some liberal activists to hear a dog-whistle for separatism, getting “Cascadia” – a term for an independent Pacific Northwest polity – trending on social media.

Meanwhile, on the East Coast, New York governor Andrew Cuomo said he would work together with five other states in the region to coordinate their reopenings as well. This would involve New Jersey, Connecticut, Pennsylvania, Delaware and Rhode Island – all run by Democrats. Later in the day the bloc achieved bipartisanship of sorts, when Massachusetts Governor Charlie Baker, a NeverTrump Republican, reportedly joined up.

Unlike “Cascadia,” this seven-state bloc has not yet come up with a catchy label, though there have been suggestions along the lines of “Acela Territories” after the passenger train corridor running through them.

These two regional agglomerations prompted hopeful speculation about how “the US federal government is losing operative control of its two primary economic centers” and “things might be done that aren’t easily undone.”

The greater New York area is setting up to make regional decisions as well. This is going to gain steam over the coming weeks, and things might be done that aren’t easily undone. 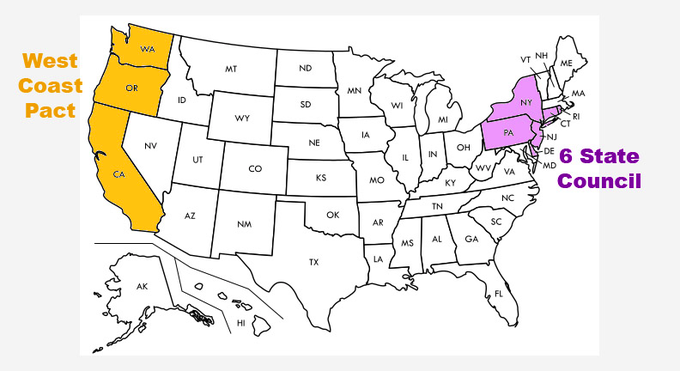 3:28 PM – Apr 13, 2020
When asked about this at the White House press conference, Trump brushed it off, insisting that the federal government had “total” authority but that he chose not to exercise it. He did not ask the governors about ending the lockdowns, he said, “because I don’t have to.”

Wrong. It is not the president’s decision. 95% of the country is under some form of lockdown. The reason it’s not 100% is because it’s a state-level decision and some governors decided not to go with full, statewide lockdowns. Trump has limited power here due to 10th Amendment. https://t.co/e3V16c62rx

and just like that the leftist suddenly discover states rights…

The reality when a national disaster was declared, the rules changed a little

But go-ahead to the states that don’t want to open back up. See how that works out as the people revolt

All this chatter quickly got the mainstream media and Twitter #Resistance obsessing about federalism, with “10th amendment” trending all of a sudden. That tail end of the Bill of Rights says the US states reserve all the power not explicitly delegated to the federal government. It has long been neglected by the unchecked expansion of federal power. The same people now swearing by the Tenth bemoaned Trump’s reluctance to declare a nationwide lockdown just last week.
.
Meanwhile, it remains unclear whether either of these regional groupings intend to end their lockdowns sooner or later than what Trump might have in mind. That detail seems to matter to them less than their determination to bypass the White House.
.

That anyone is even entertaining the thoughts of separatism in 2020 is a bit… problematic. The last time there had been a dispute over the primacy between the federal government and the states in the US was 155 years ago. Admittedly, that also involved Democrat states rebelling against a Republican president whose election they considered illegitimate.

That particular conundrum, in case some people forgot, was “resolved” by war and at the cost of more than 600,000 lives; the United States became a singular noun, and the Tenth Amendment tacitly became a quaint relic of the antebellum age.

Fiction writers have long assumed that any modern separatism in the US would involve conservatives seeking to resist the overreaching central government dominated by coastal liberals – rather than the Democrats irritated that the Bad Orange Man in the White House refused to be dictatorial enough for their taste. But here we are.

(TLB) published this article from RT-USA News with our appreciation for this perspective.

Nebojsa Malic is a Serbian-American journalist, blogger and translator, who wrote a regular column for Antiwar.com from 2000 to 2015, and is now senior writer at RT. Follow him on Twitter @NebojsaMalic