Lawmakers in Florida have passed a bill that increases punishments for rioting, looting and destruction of monuments, while making it harder for local jurisdictions to defund the police. Democrats condemned it as racist.

(RT-USA News) The state senate approved HB1, or “An Act Relating to Combating Public Disorder,” on Thursday with a vote of 23 in favor and 17 opposed. One Republican from Tampa Bay joined the Democrats in opposition. It cleared the Republican-majority House last month.

“This legislation strikes the appropriate balance of safeguarding every Floridian’s constitutional right to peacefully assemble, while ensuring that those who hide behind peaceful protest to cause violence in our communities will be punished,” Governor Ron DeSantis said in a statement following the bill’s passage. He is expected to sign it into law as early as next week.

The final version of the bill isn’t quite the “license to shoot looters” that reports on the early draft in November 2020 made it out to be. It upgrades the penalties for many misdemeanors, including rioting, looting, and assault and battery of uniformed officials. It also creates an “affirmative defense” in civil cases for injury, property damage or wrongful death when the person is acting in self-defense against someone convicted of rioting.

HB1 also makes it a third-degree felony to damage or destroy a memorial or historic property valued at $200 or above, and would have the perpetrator pay “full cost” of repair or replacement as restitution, in addition to a 10-year prison sentence.

The bill makes it much more difficult to “defund the police” on the municipal level, and opens the way to hold municipalities liable for property damage and wrongful death if they block police from responding to riots.

One provision outlaws “cyberintimidation by publication” of personal data with intent to incite violence or harassment of a person, while another outlaws threatening or using force in order to compel or induce another person to “assume, abandon, or maintain a particular viewpoint against his or her will.” 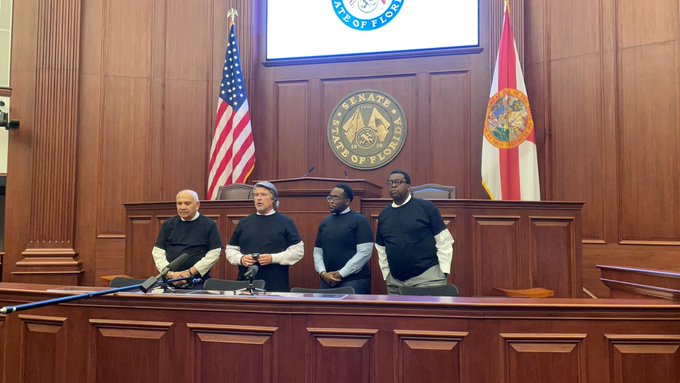 Democrats opposed the bill, and wore black in the Senate to “mourn the death of the First Amendment,” according to one local reporter. The amendment to the US Constitution protects the freedom of speech, press, religion and assembly.

“This is not going to stop people from rising up,” said Senator Darryl Rouson, a former chapter president of the NAACP. “This won’t stop anything, except those who are afraid. I’m not afraid,” he said after voting against the bill, according to AP. “I just want to say to people, keep on knocking, keep on protesting, keep on rising in spite of an attempt to stifle voices.”

Democrats have argued that the bill is racist and targets participants in Black Lives Matter protests that broke out across the US last year, following the death of George Floyd in Minnesota. While many US cities quickly descended into riots, Florida remained relatively calm – and DeSantis has repeatedly said he intends to ensure it stays so.

“The bill was purposely designed to embolden the disparate police treatment we have seen over and over again directed towards Black and brown people who are exercising their constitutional right to protest,” Micah Kubic, the executive director of ACLU of Florida, told AP.

(TLB) published this article from RT-USA News with our sincere appreciation for the coverage.