Organizers have designated April 25th “The Global March Against Geoengineering”. Since many will be recognizing Earth Day on April 25th, this is a prime time to expose the climate engineering issue. 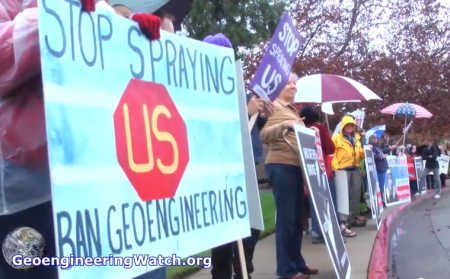 Passing out informational flyers on climate engineering at Earth Day events is well worth doing as these events are everywhere. People who attend Earth Day events care about the planet, but generally are still unaware of the geoengineering nightmare going on in our skies. 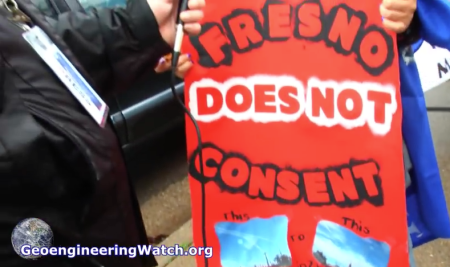 I have participated in Earth Day gatherings, protests against mainstream media denial of climate engineering, and Alzheimer’s events where people were very interested in receiving information about climate engineering. It is imperative that people make their voices heard in this battle and showing up for an April 25th anti-geoengineering march in your own region is important. This being said, it is also essential to remember that every single day counts in the fight to expose and halt climate engineering. We must not stand idle in the battle while waiting for a particular day to come and go. Fighting the climate engineering insanity can be compared to staying fit, you don’t workout one or two days a year and then say you’re in shape; it’s an every day effort. 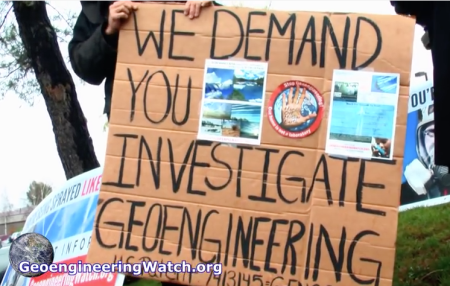 From our own home computers we can launch countless flaming arrows of credible data to groups, organizations, and individuals that would perhaps join us in this fight if they had any idea geoengineering was going on. We should all carry informational flyers with us wherever we go. We can and must make every effort to move the ball forward in this battle each and every day. How many people can one activist help to wake up by emailing out credible data to targeted groups and individuals over the course of even a single month? How many more might those newly awakened individuals and groups then help to wake up? 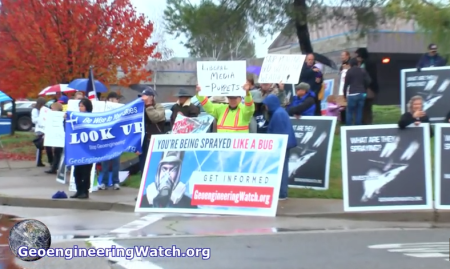 Again, we must make EVERY DAY count in the battle to expose and halt climate engineering. Below is a call to action from Christina Parousis, a very passionate and driven activist.

Taking To The Streets

To all those involved in the battle to save our planet from the global climate engineering assaults. On April 25th we have the opportunity to come together to demonstrate our solidarity and stance against the greatest threat to planet Earth, this day is known as the Global March Against Chemtrails and GeoEngineering.

As we are all aware, the governments of the world have been deceiving us by not disclosing the ongoing spraying of our skies. We do not consent to quick fixes of longstanding environmental abuse issues. It is the responsibility of every human being to acknowledge the pillaging, plundering, and destruction on this planet from overconsumption and industrialization, which have brought us to the point where our biosphere is in jeopardy and governments have taken initiative to bandage symptoms instead of addressing core issues. Whatever agenda we believe is being carried out by these programs, the common denominator is that geoengineering is not supporting the healing of our planet but rather compounding the ongoing destruction of its ability for rehabilitation.

There are no doubt millions of us with this awareness, tens of thousands that openly contest on social media sites. It goes without saying that on April 25th, our efforts to protest these dire crimes and wake up the masses should at least be on par with that which the virtual world suggests; unfortunately these events have not been indicative of our collective awareness. What are we waiting for? On this day let us declare an end to these catastrophic programs. One cannot underestimate the power of people uniting in solidarity.

We should also attend other events, like the millions who will March Against Monsanto on May 23rd, support of raising awareness on weather modification programs with signage and/or handouts. We need to inform those in the anti GMO movement and altogether march against the greater evil, geoengineering. There are many demonstrations and events whereby we should further this awareness to those that are making efforts toward change. If millions of people are protesting various other threats to the environment and our health, global climate engineering should have precedence as the greatest threat of all.

There needs to be unity and mass public uprising. This is the time! On April 25th, we will collectively affirm our resistance to these programs. Call on all to come out on April 25th to expose climate engineering programs, including alternative and mainstream media; they must be put on notice that citizens are taking public action. Every single one of us with this awareness should be physically present on this day!

Can Too Much Fluoride Lead To Breast Cancer?