When it comes to the life of a child, it is inconceivable to any normal human being that a court can refuse to give a protection order to prevent the continued torture and abuse of a four-year-old boy.

Yaniv Moyal, a human rights attorney in Israel, has been battling to save this young boy – let’s call him Sam. Sam lives with his mother and her boyfriend. The child has been injured and abused since the age of three. Sam’s father has desperately tried to get his son protection and safety. Despite reports from kindergarten teachers and psychiatric assessments proving the child is in a fully traumatized and fearful state, the court continues to prevent the child from being removed from his mother.

His has appealed through the hierarchy of the court system, up to the Supreme Court, to save Sam. The district court denied his appeal, saying: ‘If you don’t learn not to appeal, you will be fined for the benefit of the state.” Continuing to appeal, the Supreme Court fined him 15,000 shekels (USD 3,804) for his continuing chutzpah, or audacity.

The photographs of the injuries to Sam have been explained as the result of his being a clumsy child. He is described as self-harming, always falling down and a careless kid. It is difficult to image such a young a child putting cigarette burns on his own body. On one occasion, when approached by a kindergarten teacher, Sam cowered and covered his head, crouching down in fear. These are all the symptoms of a child in terror. He has been recorded as saying he is being hurt. It is horrifying to listen to him as he screams and cries for his father continuously in the first minutes of the recording below.

Mothers and fathers fall prey to the corruption of Israel’s social workers, police, family courts and judges, but the real victims are the children. Some are removed from fit parents and farmed out to private institutions who receive 17,000 shekels (USD 4,313) a month for filling rooms.

Paradoxically Sam is kept legally in the most abusive and terrifying circumstances no child should ever have to endure.

After being in the safety of his father, when Sam was being returned to his mother he was in such terror he physically vomited. These pictures are graphic and yet still the Judge refuses to grant a protection order for Sam which would open the way to an investigation of his injuries.

The cruelty of neglect inflicted on Sam is state sanctioned and enforced. Sam’s father has relentlessly fought for his son. Moyal’s life is consumed by this case. He files appeals every single day.

Initially, Moyal won a protection order for Sam. He filed a complaint to the police and sent disks and photographs to the pathologist. The police looked at the photographs, and on those alone concluded there was no investigation required and closed the complaint. 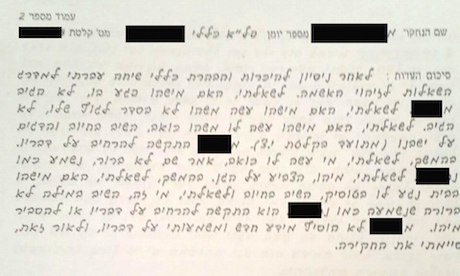 The social workers also reported that the child was fine as far as they could tell. After nine days the judge rescinded the protection order and added that her reasoning was also based on the requests filed by Moyal, which she considered critical of the court process; therefore, the child would be returned to his mother.

Since then the lawyer has endeavored to have the judge replaced by a less emotionally biased judge installed. All requests have been refused. Meanwhile, Sam has continued to live in a violent and unsafe home.

On another occasion, Sam complained of having a sore anus. His father took him to the emergency room and the doctor’s observation was that Sam must be removed from his environment and seen by a specialist in child abuse as he thought the boy was suffering from severe neglect. Sam’s father presented the hospital letter and photographs to the police. They informed him that a call from a social worker had instructed them to do nothing and, therefore, nothing happened. 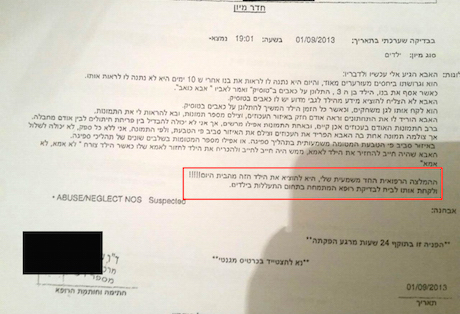 There are other cases where the power of the social workers is so absolute that children have been removed from hospitals minutes before sexual abuse examinations take place.

There are literally thousands of pages of legal documentation, and a few are shown here in Hebrew to verify this ongoing case. Today, a request was placed in the court to allow the mother and her boyfriend to take her son and live in Canada permanently. Despite Moyal’s constant appeals, the child is still with his mother.

The cries you hear of this young Israeli boy can be multiplied by thousands. In a so called democracy these children are growing up under the control of the state. In Israel, the Welfare Ministry and social workers have absolute power over the child. Men and women live in fear of making a single mistake. Where there is money to be made, it is a guarantee that by the time you have finished reading this article today one parent will have committed suicide, one parent will have decided to give up fighting, and one child will be destined to either a life of abuse like Sam or, even worse, destined to live in to private institutions that make profit from each and every tear a child will cry.

What price should Sam pay? Listen to the children and the parents and help Israelis move beyond existence and corruption. They do not have the time to think of politics or war. Sam has one hope. The attorney Yaniv Moyal is a lionhearted man. He lives and breathes the case. He fights as if Sam were his own son. He challenges the courts, the judges and the police. He works around the clock as hundreds of people come to him for help. He works so many pro bono cases he barely makes a living.

Is it anti-Semitic to report what happens to Jewish children living in hell? Is it a cause for celebration for those who are anti-Israel to listen to the screams of this young, innocent boy?

No rational human being can ignore the cries of these children anymore.

For for more details on this case in Hebrew, click here.

TLB recommends you visit  (click on logo to visit site)

For more pertinent articles and information.

Non-White Migrants and the Catholic Church: The Politics of Penitence